Asteroids May Have Delivered Water To Earth Billions Of Years Ago 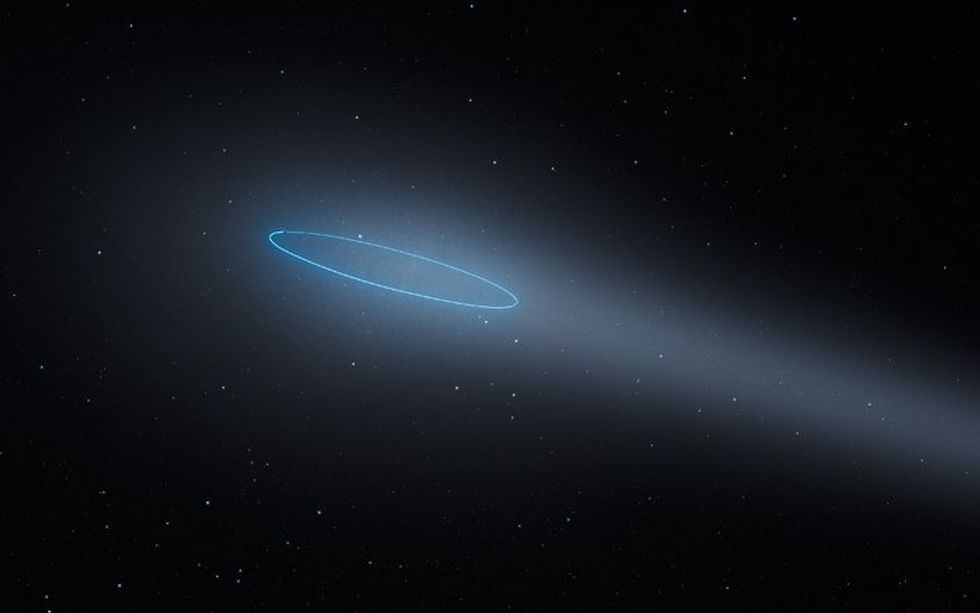 This artist’s impression shows the binary asteroid 288P, located in the main asteroid belt between the planets Mars and Jupiter. The object is unique as it is a binary asteroid which also behaves like a comet. The comet-like properties are the result of water sublimation, caused by the heat of the Sun. The orbit of the asteroids is marked by a blue ellipse.

In September 2017, an analysis of a binary asteroid helped scientists get closer to solving the mystery of Earth’s water. Binary asteroids are common in our solar system, and many asteroids even have their own moons. In 2016, the Hubble Space Telescope observed two asteroids orbiting each other as they passed by the Sun. Asteroids can range in size from a few meters, to a few hundred kilometers, such as Ceres. The binary object, now called 2006 VW139/228P, is different from typical binary asteroids; the two asteroids in 288P are only 0.6 kilometers across, and have an orbit between just 70 and 140 kilometers. So far, 288P is theonly object in our solar system dubbed both a comet and an asteroid.

In a paper published inNature, Dr. Jessica Agarwal concluded that the asteroid that it broke in half around 5,000 years ago, a result of its fast rotation. “We detected strong indications of the sublimation of water ice due to the increased solar heating – similar to how the tail of a comet is created,” Dr. Agarwal said. Water ice on the asteroids’ surfaces gets converted into steam as 228P passes close to the Sun. The resulting water vapor forms a cometary tail, making 228P look like a comet.

How Did Earth Get Its Water?

Water covers 71 percent of the surface of the Earth. The newly-formed Earth was too hot for liquid water to form on its surface, and there wasn’t enough water vapor coming from volcanoes to account for how much water is on Earth today. If it didn’t originate here, where did Earth’s water come from? This question will help humanity learn how life originated (and, even more amazingly, where).

Between 3.9 and 3.8 billion years ago, Earth underwent a continuous series of impacts known as theLate Heavy Bombardment. For 20-200 million years, Earth was impacted by countless comets, asteroids and even proto-planets. These impacts contributed to Earth’s size and chemistry, but which specific astronomical bodies delivered water to Earth has remained elusive. When the water released from 228P was analyzed by Dr. Agarwal and her team, a substance called “heavy water” was found in the same ratio to H2O as on Earth, adding credence to hypotheses that asteroids may have delivered much of Earth’s water to the planet billions of years ago.

“Heavy Water” Is The Key

“Heavy water,” known formally as deuterium oxide, is a water molecule in which one or each hydrogen atom contains a neutron. Deuterium is a rare isotope of hydrogen, containing one proton and one neutron in its nucleus. Deuterium was discovered in 1931 by Harold Urey and George Murphy at Columbia University, a discovery which earned them the Nobel Prize in 1934.

Scientists realized heavy water could be used as aneutron moderator in a fission reaction. Fission, the act of splitting an atomic nucleus, is what powers nuclear power plants and atomic bombs. Heavy water is used to regulate the speed of neutrons that are fired at uranium atoms, causing their nuclei to split. This causes a chain reaction to take place, releasing massive amounts of energy. In fact, the energy released in one gram of fissile uranium is8,000 times more efficient than that of fossil fuels. On Earth, heavy water israre; only 1 in every 3200 water molecules contain deuterium. In comets and asteroids, the small, rocky objects that populate our solar system, heavy water occurs in varying amounts, NASA discovered. Finding objects with the same heavy water to water ratio is the key to identifying the source of Earth’s water.

Additional clues that asteroids or asteroid fragments delivered water to the young Earth has also been found in meteorites. Meteoroids are small, rocky fragments of asteroids that fall to Earth from space. We see them as “shooting stars” as they break apart and burn as they fall through Earth’s atmosphere. When they hit the ground, they are called meteorites. Though they are mostly comprised of iron and nickel, meteors also contain water.Analyses of meteorites reveal deuterium oxide levels equal to those of the Earth, which means these objects must have formed in the same region of the solar system as the Earth. Meteorites also contain levels of hydrogen, nitrogen, oxygen, and carbon, the building blocks of organic compounds.

Comets Have Too Much Deuterium

Older theories postulate that Earth’s water came from comets, the dirty snowballs left over from the formation of the planets. Comets generally reside in the far outer solar system in regions such as theKuiper Belt, a thin disc of comets and dwarf planets beyond the orbit of Neptune, and the Oort Cloud, which is a thin,icy shell of trillions of comets surrounding our solar system. The Oort Cloud is 100,000 times Earth’s distance to the Sun: 15 trillion KM, or about 1.5 light years.

As they pass through the inner solar system, heat from the Sun sublimates ice on the comet’s surface, creating the familiar tail, or coma. Cometary comas can stretch for billions of miles. Famous such comets are Comet Hale-Bopp and Halley’s Comet. In July 1994, the Hubble Space Telescope observed comet Shumaker-Levy 9 slamming into Jupiter, an event which was witnessed live on Earth. Some of the impact scars left by the fragmented comet were larger than the Earth.

In 1986, the European Space Agency flew a probe called Giotto past Halley’s Comet. Giotto’s measurements revealed that Halley’s Comet contained twice the amount of heavy water as Earth. Halley’s Comet originated in the Oort Cloud, though it now resides in the Kuiper Belt. Halley’s Comet is one of thousands of Oort Cloud objects studied by astronomers. During their close fly-bys of Earth from 1996-1997, Comets Hale-Bopp and Hyakutake were alsofound to have twice as much deuterium as Earth.

In 2014, the European Space Agency’s Rosetta Spacecraft entered orbit around another Oort Cloud object: Comet 67P/Churyumov–Gerasimenko. Rosetta is the first spacecraft orbit a comet, and from its findings, scientists made some remarkablediscoveries about the relationship between comets and Earth. Rosetta also carried a probe called Philae, the first spacecraft to land on a comet. In its sampling of 67P, Philae foundsixteen organic compounds, including water, which comprises 80.92 percent of the comet. This water, however, containsthree times the amount of heavy water on Earth. Because deuterium levels in comets are found to consistently be higher than those on Earth, most of Earth’s water probably did not come from comets. Comets may not be the source of Earth’s water, but they are certainly responsible for helping form our planet’s chemistry.