Scientists at the University of Cambridge have designed a robot “mom” that discovers how to build little walking baby robots out of blocks with motors in them. The “mom” robot, shaped like a mechanical arm, is not given any plans or instructions on how to design the children. She starts with a collection of simple cubes containing motors and moving parts, and assembles them into different patterns. She then places each robot on a runway, activates the motors, and watches to see how far it travels. Depending on how they are put together, some of the child robots move farther and faster than others. The “mom” robot then analyzes the configurations that moved the farthest, and uses those structures as a starting point to create a  new “generation” of baby walking robots to activate and test. 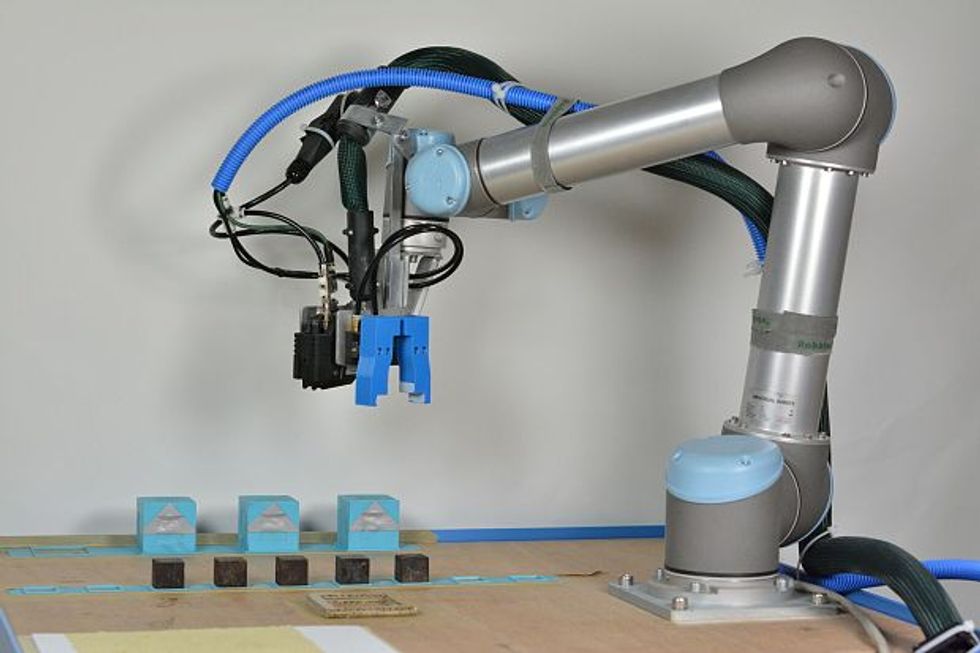 This procedure mimics the process of evolution: the robot builds a population of simple block-based devices that are similar to each other but have individual variations. They are given a fitness test: the robot evaluates which ones can travel the farthest in a given period of time. Then, they are subjected to a selection process: the “mom” robot chooses the best performers to be the basis for creating a new population of block-based devices, all with their own individual variations, so the entire process can repeat. Over time, the best performers get incrementally better at performing the task for which they are selected: walking quickly.

You can read the full article at PLOS ONE, a free online scientific journal.

Some articles are reporting this as an advance in artificial intelligence; however, although it is certainly related to that field, this research is more closely tied to a lesser-known area of investigation called artificial life.

Artificial life was a hot topic throughout the 1990s. In the United States, the Santa Fe Institute held annual conferences for researchers from around the world to discuss topics ranging from evolutionary robotics to genetic programming, to the simulation of flocks

and swarm behavior in animals. It was a small, niche field populated by dreamers and researchers who wanted to be on the cutting edge of science, technology and philosophy. They spent as much time talking about philosophical questions like “what is life?” as they did complex mathematical analyzes and simulation algorithms.

In 1991, at the second annual Artificial Life conference at Santa Fe, professor of ecology and computer science Tom Ray presented a computer simulation called Tierra. Tierra was a simple open-ended evolutionary system: inside a custom-built operating system, simple programs all ran concurrently and performed a single operation: they made copies of themselves in memory, with small changes to the code each time. Some of these changes made the programs crash, which meant those programs would not create any new copies. Other changes slowed down the functioning of the code, so those copies would make fewer copies than their siblings. But some changes resulted in faster, more efficient code: and with each iteration of one generation after another, these were the programs that made up more and more of the population.

It was a simple and elegant demonstration of the process of evolution. There was nothing explicitly in the programming that said “let’s try to make this program faster.” Simply by virtue of how the programs replicated in their environment, they became massively more efficient over time. 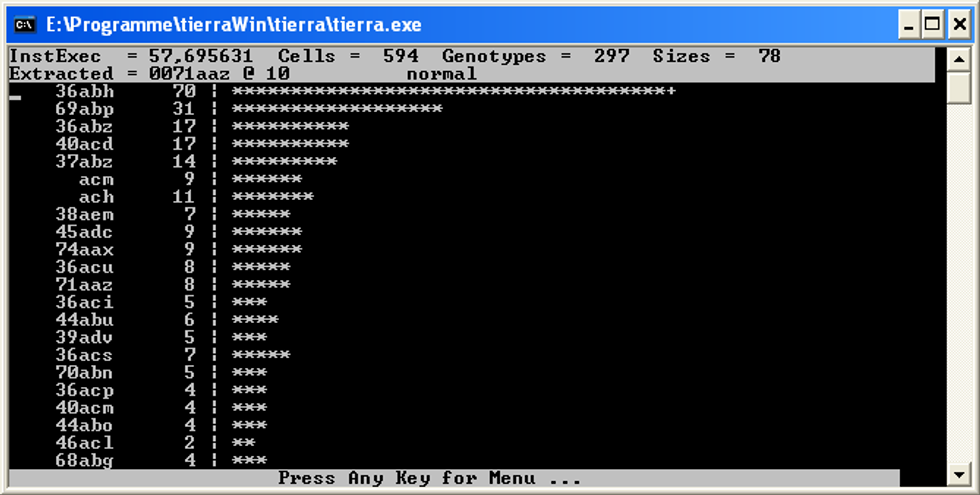 Tierra Simulation via Mario23 on Wikipedia

Even more fascinating, when Ray looked inside the code that had evolved, he discovered that they had become incomprehensible: the process of evolution had “discovered” ways to make these programs more efficient that were counter-intuitive and unlike anything human programmers would ever come up with.

Ray passionately argued that his little Tierra programs were a form of life. After all, they reproduce and they evolve. Aren’t those key factors in what living systems are all about? Even though they were simple, and only existed in that simulated world, couldn’t we say that they were at least in some sense alive? Not everyone was convinced by this argument,

of course; but everyone was tantalized by the question. What does it mean to call something alive? What would an artificial machine need to be able to do for us to look at it and agree, “That is alive!”

At the 1994 Artificial Life conference, digital media artist and computer research scientist Karl Sims presented a paper called “Evolving 3D Morphology and Behavior by Competition.” He described a 3D simulation in which small programs produced different configurations of blocks that could  “walk.” Inside this virtual universe, Sims used the same basic concept of evolution used by the robotic researchers at Cambridge who created “robot mom”: the configurations of blocks that traveled the largest distance were used as “parents” for a next generation of configurations. As a result, over time, the performance of each generation improved, until a wide variety of effective “walking machines” were simulated. 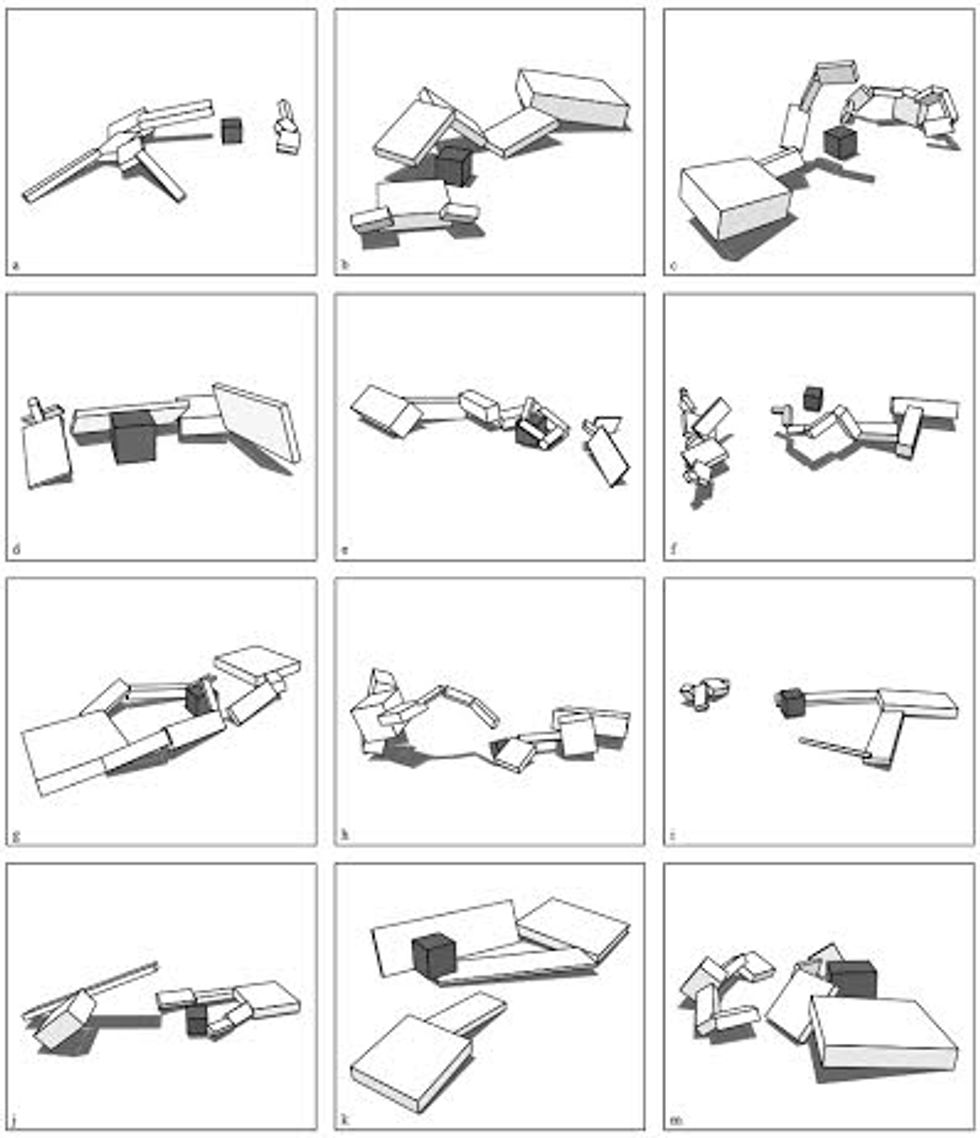 The biggest limitation of these early experiments is that they were entirely virtual. In a sense, their configuration was “idealized,” like any simulation model of the real world. How could we be sure that the simulated configurations were actually buildable? Would they encounter unexpected problems with physics or design? The end result was only as good as the simulated “physics” of the programmer’s virtual world.

The robotics researchers at Cambridge have overcome that problem by actually taking the idea and translating it into the real world: actual robots that you can see and touch, that are bound by all the limitations of physical reality. This is one of the most important breakthroughs of this research: these evolutionary robotics engineers are moving the 1990s simulations out of their virtual worlds and into the real, physical world around us.

The Next Steps for Robot Parenting 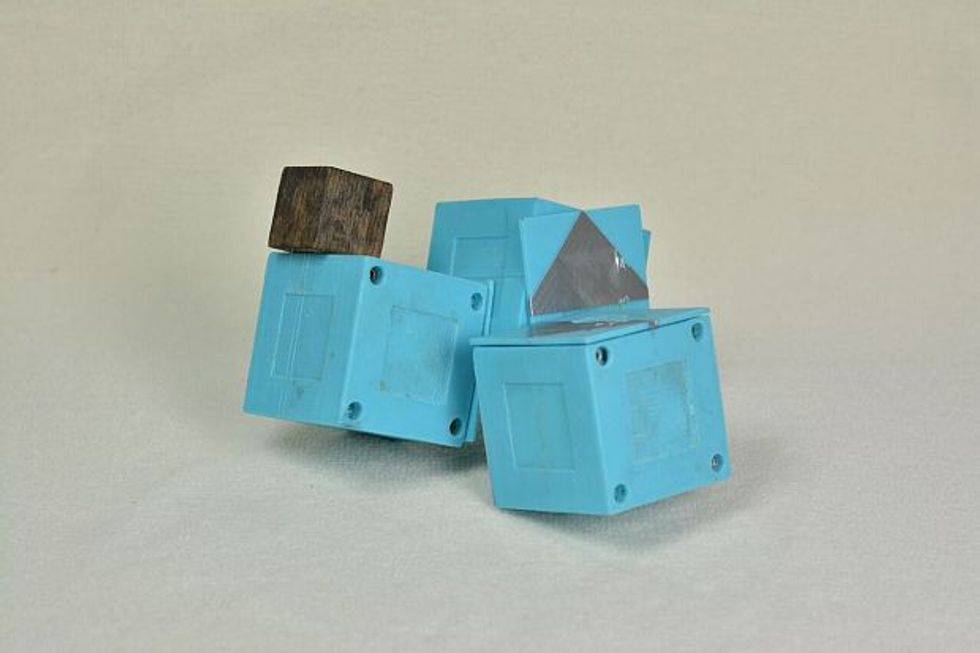 In this experiment, the robot arm is not a member of any “generation” and is not building more robots like itself. Instead, it stands outside the population that is evolving: both creating the walking robots and evaluating their fitness and selecting which ones will go on to produce the following generation. From the standpoint of evolutionary theory, the “robot mom” is actually behaving more like a predator than a mother: deciding which walking robots are not fast enough to “survive” into the next generation.

However, creating true “robot moms” in the evolutionary sense is one obvious next step that this research could and should take. Soon we will be seeing a robot arm that builds a generation of robot arms, that themselves will be capable of building even better robot arms. It will have that same mind-bending, self-referentiality as the 3D printer that is able to print itself. However, when these robots make copies of themselves, they will introduce slight variations, and will be able to test to see which of their copies works better or worse in the real world. It will be true, physical evolution of mechanical objects in the real world.

Once that is achieved, it might be time for the Santa Fe researchers to revisit the question: what, exactly, do we mean by “life” anyway?

Days later, Limbaugh made even more headlines when he scoffed at the idea that gay South Bend, Indiana Mayor and 2020 presidential contender Pete Buttigieg would kiss his husband on a debate stage next to "Mr. Man" Donald Trump.

Despite massive outcry against the homophobic remarks, Limbaugh has yet to apologize.

Now, we know why.

Stephen Miller, the white supremacist Trump administration official behind some of President Donald Trump's most insidious anti-immigration policies, was married at the Trump International Hotel in D.C. this past weekend.

While he and his new wife, Vice President Mike Pence's press secretary Katie Waldman, enjoyed a day of blissful matrimony, others called attention to the numerous immigrants and refugees whose lives have been ruined by policies Stephen Miller helped build.

Among them? Miller's own uncle.

Nearly 90 percent of the United States Congress is Christian, and every single President in U.S. history has been Christian, while Christians only make up 65 percent of Americans.

That's not enough representations for the National Association of Christian Lawmakers, a Conservative Christian group dedicated to influencing America's politicians to favor Christianity over constituents.

President Donald Trump and those who work for him routinely tout the United States' low unemployment numbers and economic prosperity as evidence that his term as President so far has been a success.

President Donald Trump took the opportunity to hype his pet project—bollard fencing along the southern border—to a meeting of the National Border Patrol Council.

The NBPC—a union organization not part of the federal agency—is "the exclusive representative of approximately 18,000 Border Patrol Agents and support personnel assigned to the U.S. Border Patrol."