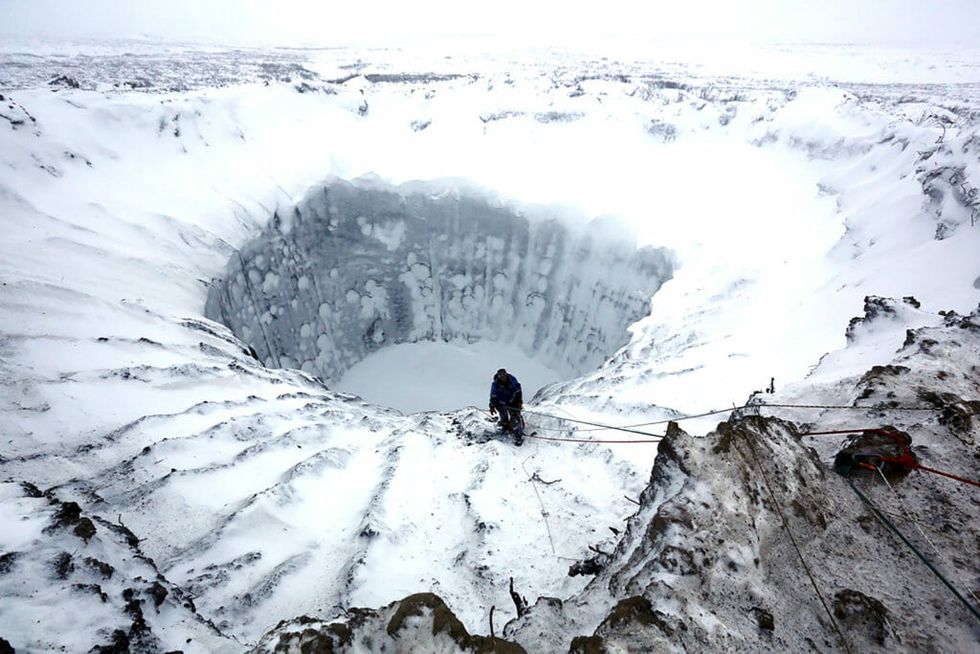 Across the Arctic, dramatically rising temperatures are causing permafrost to become decidedly less than permanent.

Permafrost is soil, mixed with sediment and rock, going down thousands of feet into the earth. It has formed, layer by layer, over the past half-million years. While a thin top layer can thaw during the warmer months and support plant growth, much of the permafrost has been frozen in place since the end of the Ice Age.

But in recent years, sections of permafrost around the world are thawing. As the planet heats up, the permafrost slowly dissolves, creating a range of geological behaviors, revealing a wealth of incredible information about the last 200,000 years of earth science and unlocking some dire forces that will shape our planet’s future.

Around the world, however, this permafrost is now rapidly melting. In Siberia’s northeast region, thawing permafrost is creating large craters, ravines and giant bubbles in the earth filled with ancient gases that poised to burst and to be released into the atmosphere. The largest crater, or megaslump as it is also known, measures more than half a mile long and 282 feet deep. Called the Batagaika crater, it has been growing since it formed in the 1960s after the forest was cleared in the Eastern Siberian taiga. Without the cooling tree cover, the land thawed and collapsed.

“In the 1960s, there was a road between the village of Batagai and some industrial facilities. The forest was cut down, and this led to the formation of the ravine. In recent years, against the backdrop of climatic changes, due to the warming, the ravine grew to the size of crater,” said Gregory Savvinov, director of the Research Institute of Applied Ecology of the North.

The crater is known by the local Yakutian people as the “doorway to the underworld”and inside, scientists have discovered evidence of past forests, fossils, mummified bodies of animals, and newly exposed geology that yields up to 200,000 years of historical climate records.

While this gives scientists a bounty of new information about the planet’s past, it also presents a dire scenario for the future. Permafrost stores massive amounts of carbon. As humans have released carbon into the atmosphere via combustion, the planet has warmed, leading to the thawing of the permafrost, which then releases even more carbon into the atmosphere, a cycle that is rapidly accelerating the rate of global warming.

In Siberia, the melting permafrost has created more than 7,000 giant underground bubbles, discovered in 2016, that are poised to burst and release even more carbon into the atmosphere. In Northern Canada, a section of permafrost the size of Alabama is melting. In Alaska, permafrost melting in Fairbanks, the state’s second-largest city, has led to damage to infrastructure as flooding and shifting soils impact roads and buildings. Permafrost currently defines about 24 percent of the land in the northern hemisphere.

In addition to greenhouse gases released by permafrost melts, the transformation of solid ground into mud and water is leading to large-scale changes in the northern environment. Collapsing permafrost is causing landslides that are choking off rivers and lakes with huge influxes of mud and silt, impacting fisheries and other ecosystems. Northern Canada, Scandinavia, Alaska and other Arctic regions all report dramatic changes.

"Things have really taken off. Climate warming is now making that happen. It's exactly what we should expect with climate change," said Steven V. Kokelj, lead scientist on the Canadian mapping project. "And the maps that we produced clearly indicated it's not just a random pattern. We're sort of connecting dots here for the scientific community."

It’s a grim scenario, and, without international efforts to slow the rate of human contributions to greenhouse gases, one that is becoming increasingly inevitable. U.S. President Trump has called climate change a hoax invented by China, and is actively halting efforts to stop it.

But perhaps the wooly mammoth can help.

A father and son team is planning to create a giant park in Russia populated by wooly mammoth and other herbivores from the Ice Age. Frozen carcasses revealed by melting permafrost have given scientists the DNA to clone the lost extinct animals — perhaps within two years. The duo contends that the grazing behavior of the mammoths will help lock down the permafrost and slow global warming. They have already been populating the park with bison, moose and ox.

“Mammoths would be helpful for our system – the more herbivores you have in the ecological system the better, said Nikita Zimonv, who with his father Sergey could bring the past back — to the future.