The global meat industry is soaking the planet in antibiotics — and drug-resistant bacteria is the result. 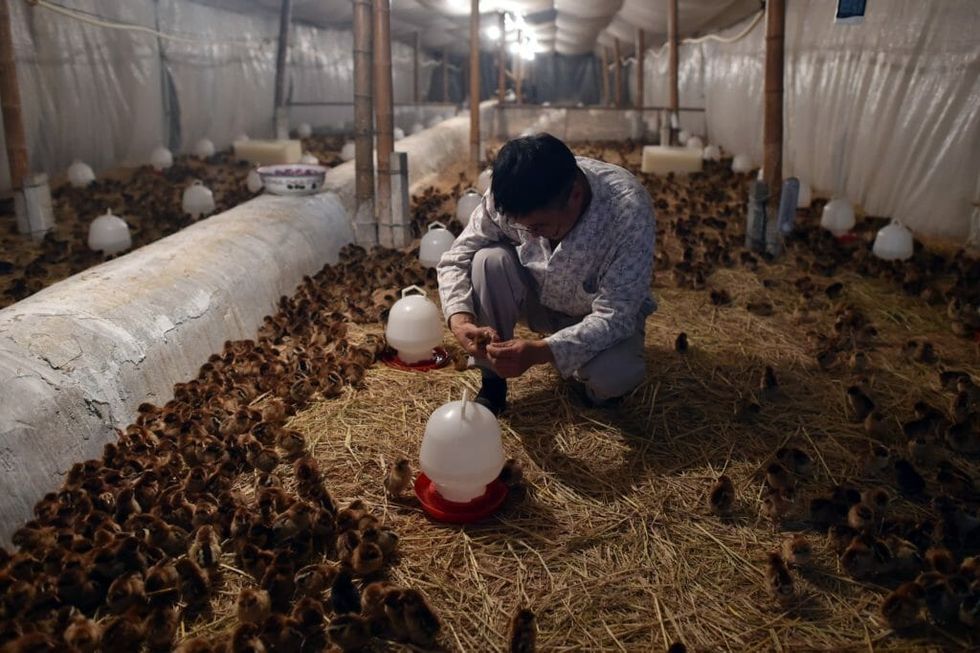 A worker checks out a chick at a poultry farm in Hefei, eastern China's Anhui province on November 20, 2015. Scientists warned of the "epidemic potential" of deadly and fast-spreading bacteria resistant to last-line antibiotics. The superbugs were detected during routine health testing of pigs and chickens in southern China. The animals were found to be carrying bacteria resistant to colistin, an antibiotic widely used in livestock farming. CHINA OUT AFP PHOTO (Photo credit should read STR/AFP/Getty Images)

Our best medicines are losing their power. Since the 1940s, antibiotics have stopped infections from turning deadly, saving millions of lives around the world. Prior to the discovery of antibiotics, surgery was more dangerous, now-curable diseases like STDs and tuberculosis killed millions, and a paper cut could be fatal. However, overuse and misuse of these drugs have led to the rise of antibiotic-resistant strains of “superbugs.” Older types of antibiotics have been rendered useless by these powerful bacteria, compelling researchers to develop new generations of stronger varieties. Now those newer drugs are losing their effectiveness as well, and the World Health Organization has raised the alarm: We are running out of cures.

"Antimicrobial resistance is a global health emergency that will seriously jeopardize progress in modern medicine," said Dr. Tedros Adhanom Ghebreyesus, Director General of WHO. "There is an urgent need for more investment in research and development for antibiotic-resistant infections including TB, otherwise we will be forced back to a time when people feared common infections and risked their lives from minor surgery."

For years, researchers have focused on healthcare providers, urging them to stop prescribing antibiotics for situations where they aren’t needed or won’t help, in an attempt to slow the growth of drug-resistant bacteria. Meanwhile, drug-resistant genes are being spread throughout the world another way: Through livestock feed.

Nearly 80 percent of antibiotics aren’t prescribed to humans at all. Instead, they are fed to animals as part of a chemically enhanced diet designed to make them grow faster and bigger, and resist diseases in a factory-farm environment. By 2020, an estimated 200,000 tons of antibiotics will be fed to animals, and released into the environment via their meat and manure. People living around these farms have an increased risk of acquiring — and spreading — drug-resistant infections.

A 2013 study of Pennsylvania found that people living near pig farms or fields fertilized with pig manure are 30% more likely to become infected with methicillin-resistant Staphylococcus aureus bacteria. Bacteria can also spread through the air. When Johns Hopkins’ researchers Bloomberg drove behind poultry trucks in cars with their car windows open, they later found antibiotic-resistant bacteria in the air inside the cars and on beverages inside the car.

“Antibiotic resistance is kind of a numbers game,” says David Wallinga, a physician and senior health officer at the Natural Resources Defense Council, and an author of a new report detailing the role agriculture plays in creating drug-resistant bacteria. “The more you use the antibiotics, the more you’re basically helping to spur the development and spread of resistance to those antibiotics.”

Scientists have identified three strains of bacteria that are resistant to all antibiotics, including Colistin, the powerful antibiotic of “last resort.” This summer, MCR-3, a gene that confers resistance to antibiotics, appeared on a Chinese pork farm.

Researchers at Dalian University of Technology in China found antibiotic-resistant genes in fishmeal, meat-and-bone meal and chicken meal. The report says that fishmeal — “one of the most globally traded commodities”—serves as “a vehicle to promote antibiotic-resistant gene dissemination internationally” as it is distributed to farmers around the world, poured into the ocean via aquatic fish farms, and releasing the bacteria to new regions.

The meat industry’s role in creating drug-resistant bacteria is leading some producers to take steps to reduce their use of antibiotics. In 2016, Subway and McDonalds stopped serving chicken sandwiches made from chickens raised with antibiotics. Purdue Chicken also phased out antibiotics on its farms. Even so, as factory-farming methods spread around the world, antibiotic use in farming is rising.

Some scientists are urging farmers to stop using antibiotics on livestock that are also used in humans. Others want to see changes to farming practices that would promote health.

“It’s not rocket science,” Wallinga says. “It’s things like: Let’s keep the animals healthier in the first place so they don’t get sick, not by using antibiotics in their feed, but by doing things like giving them better nutrition.”