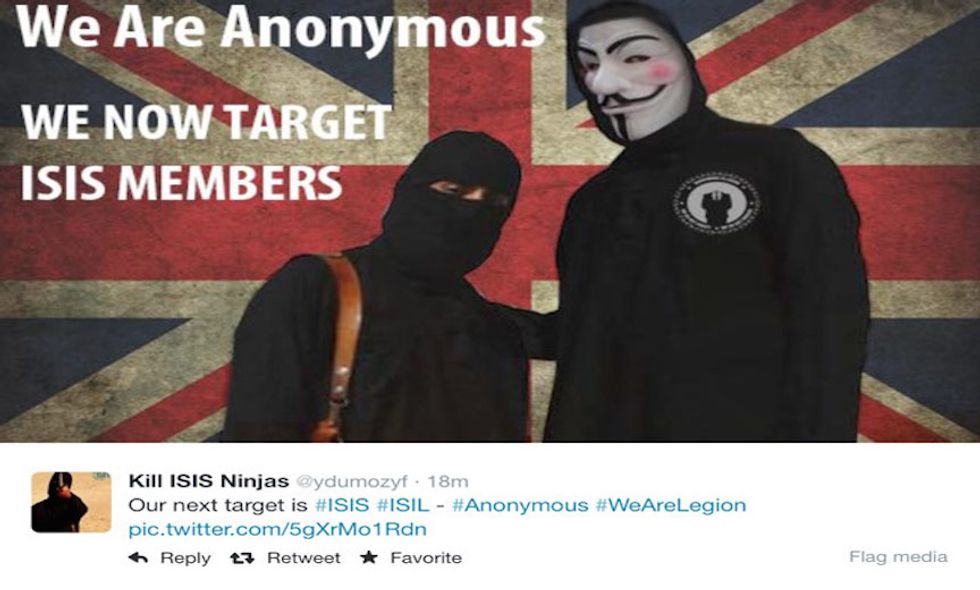 A member of the hacktivist group Anonymous has found a clever way to troll ISIS after the Orlando shooting.

Hacker Wauchula Ghost has been at work hacking pro-ISIS Twitter accounts since at least March 2016 and has replaced some of the organization’s jihadist content with gay pornography, rainbow flags and gay pride slogans. The hacker took screenshots of the actions, which include such messages as “I’m Gay and I’m Proud” and “LGBTQ Pride Month.”

Wauchula Ghost is not acting alone. Fellow Anonymous members Ebony and Yeti joined the viral crusade. When not hacking ISIS’s Twitter accounts, the team regularly tweets the pro-ISIS accounts’ IP addresses. The IP addresses belong to users in the United Kingdom, Turkey, Iran, Jordan and Oman, among others.

The hacktivist explained his reasoning for his Twitter assault in an interview with Newsweek: “Daesh [ISIS] have been spreading and praising the attack, so I thought I would defend

those that were lost. The taking of innocent lives will not be tolerated.”

Sunday’s mass shooting at Orlando’s Pulse nightclub, which left 49 people dead and 53 injured, is the deadliest mass shooting by a single gunman and the worst incident of violence against the LGBT community in American history.

ISIS owns thousands of Twitter accounts and regularly uses the platform to espouse messages of violence. The organization uses the site as a platform to propagate incidents of torture, as well as executions and mass killings. However, Twitter shuts down ISIS-affiliated accounts almost as soon as they appear.

"We condemn the use of Twitter to promote terrorism and the Twitter Rules make it clear that this type of behavior, or any violent threat, is not permitted on our service," a Twitter spokesperson told CBS San Francisco on Wednesday. "Since the middle of 2015 alone, we've suspended over 125,000 accounts for threatening or promoting terrorist acts, primarily related to ISIS."

As entertaining as the hacks may be for Twitter users, Anonymous is mindful of the reaction from the global community. Wauchula Ghost addressed concerns that the use of pornography would disparage both Muslims and the religion of Islam: “Our actions are directed at Jihadist extremists. Many of our own [group of hackers] are Muslim and we respect all religions that do not take innocent lives.”