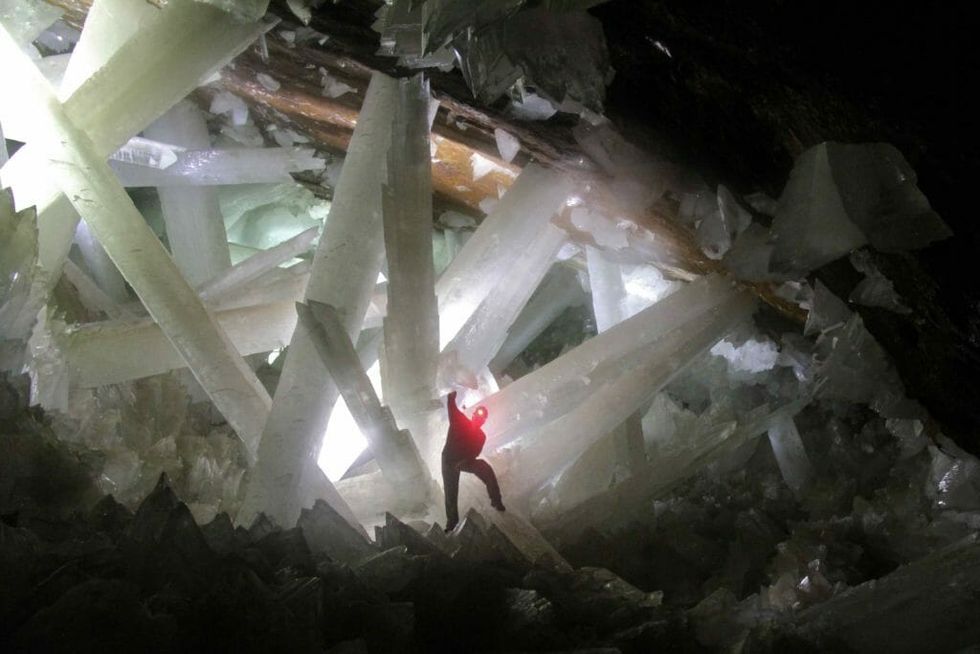 The Cave of the Crystals is only beginning to reveal its secrets. The spectacular cave, discovered in 2000, is connected to the Naica Mine in Chihuahua, Mexico. It quickly became famous for its gigantic crystals — the largest is 39 feet long. Now NASA scientists have discovered something else inside the cave: some of those crystals contain dormant life forms that are over 50,000 years old.

These ancient microbes are contained inside of inclusions — defects or small pockets where fluids collected and became encased during the crystal’s development process. Using sterile tools, Dr. Penelope Boston, director of NASA’s Astrobiology Institute in Moffett Field, California, and colleagues opened these inclusions and sampled their contents. They re-animated the organisms in their lab.

Suspended in time and trapped inside the crystals, the microbes are believed to have evolved to survive on a diet of sulfite, manganese and copper oxide. They also adapted to survive the extreme and harsh conditions of the hot, humid cave, and their contained circumstances within the crystals mean they evolved in a vacuum, and bear little resemblance to other life forms.

“These organisms are all very extraordinary — they are not very closely related to anything in the known genetic databases,” said Boston.

The crystal-bound organisms fall into a category of “extremophiles” — microbes that can thrive in seemingly impossible conditions. The cave environment is hot (104-140F), humid and acidic. With no available natural light, the microbes also must use chemosynthesis to derive the energy needed to sustain itself by processing rock minerals.

Boston’s findings may illuminate the origins of life on Earth. They also pose some challenging questions for future space exploration. As an astrobiologist, Boston is exploring what microbes like the ones found in the Naica crystals might be found in extreme environments outside of our planet. She is also interested in the risks posed to space environments by hardy microbes that could leave the Earth on space-bound vehicles and installations.

“The astrobiological link is obvious in that any extremophile system that we're studying allows us to push the envelope of life further on Earth, and we add it to this atlas of possibilities that we can apply to different planetary settings," she said.

If scientists bring back samples collected on space missions, microbes like the ones found in the crystals could pose a danger on Earth. Likewise, Earth-originated organisms that hitch a ride into space could contaminate other planets. NASA does sterilize its spacecraft and equipment before launching them into space. But with microbes able to survive extreme conditions and time periods, the effectiveness of sterilization techniques comes into question.

As humans continue to explore the solar system, these microbes also raise the possibility that life forms are indeed somewhere out there. If super-hardy, long-lived microbes can survive nearly impossible conditions on our planet, perhaps such organisms could also live on other planets or moons.