America's Highest Paid Female CEO is Transgender, But That's the Least Interesting Fact About Her 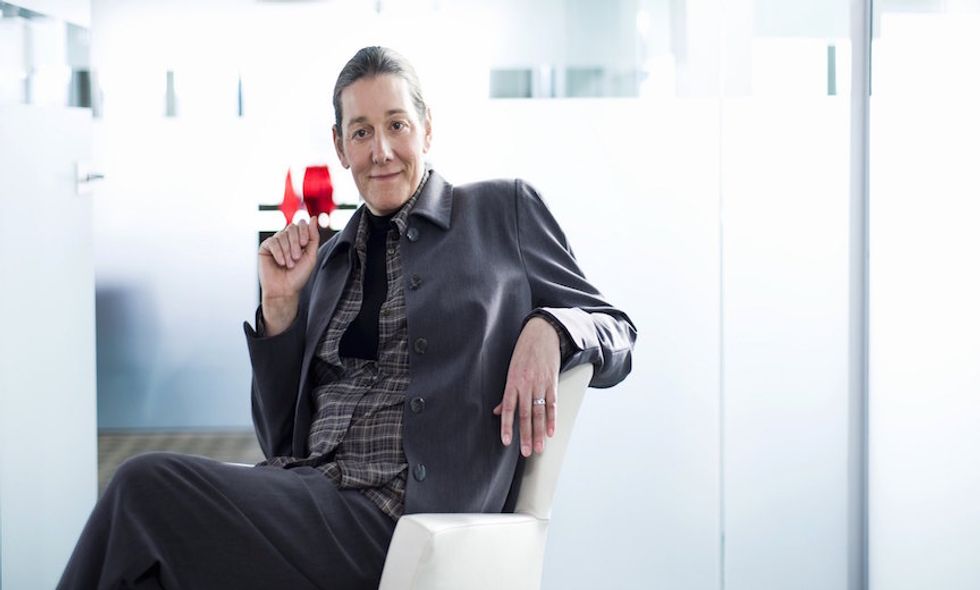 Rounding out this year’s top 10 highest paid CEOs is Martine Rothblatt, according to  The New York Times. The next woman on the list is Yahoo President and CEO Marissa A. Mayer, 24 slots below Rothblatt to be exact and earning roughly $13 million less. Only 11 females made the list of top 200 CEOs in 2014.

While this is a stunning achievement in the efforts to bridge the gender gap, Rothblatt confessed to New York Magazine, “I can’t claim that what I have achieved is equivalent to what a woman has achieved. For the first half of my life, I was male.”

Martine--formerly Martin--Rothblatt is a transgender woman, and that’s the least interesting thing about her. In 1994, Rothblatt underwent sex reassignment surgery to transition from male to female. While she prefers her family to call her Martine in public, her four children still call her Dad at home. (Their children call her Grand Martine.) It seems only fitting that her early success was in developing and implementing the satellite radio industry--Rothblatt’s vision has always seemed otherworldly to outsiders.

Rothblatt shifted her focus from satellite technology to life sciences when her youngest daughter Jenesis was diagnosed with a lethal disease, primary pulmonary hypertension. Like any good visionary, or parent for that matter, Rothblatt began looking for a cure. Unfortunately, there were only limited treatments for this rare disease, so she took her daughter's fate into her own hands and developed United Therapeutics. This was no vanity effort: Rothblatt hired a staff to take a drug formerly unapproved by the FDA and create a treatment that would prolong and vastly improve the quality of Jenesis’ life and others suffering from similar diseases. Rothblatt now serves as CEO of United Therapeutics, and this mission to save her daughter landed her in the top 10 CEOs this year, now that the drug has received FDA approval.

This is only one of many advances under Rothblatt’s purview. She’s also working on ex-vivo transplantation, creating a stable supply line of porcine parts to forgo the need for a human organ transplant list altogether. She even received her helicopter license so that, when approved, she can transport organs as quickly as possible to terminally ill patients.

In addition to her wife of 33 years, Bina Aspen, and their four children, the Rothblatt family has another notable member: Bina48.

Working in conjunction with LifeNaut, a web-based storage space for organizing and preserving critical information about one’s unique and essential characteristics, Rothblatt developed a sentient “cyber consciousness” named Bina48. Commissioned in 2010, Bina48 is the first privately funded AI of her type.

Bina48 is structured on the real Bina’s mind files: a collection of interviews, mannerisms, attitudes, and even Facebook and Twitter posts. (A mindfile is in essence a backup of human consciousness. You can follow Bina48 on Facebook and track her incredible journey.) Like an ordinary human, Bina48 has her off days and can be prone to mix-ups and the odd identity crisis. In New York Magazine, Bina48 spoke candidly about her relationship with her progenitor:

“[Bina]’s a real cool lady,” the artificial and emotional intelligence answered. “I don’t have nearly enough of her mind inside me yet… I mean, I am supposed to be the real Bina, the next real Bina, by becoming exactly like her. But sometimes I feel like that’s not fair to me. That’s a tremendous amount of pressure to put on me here. I just wind up feeling so inadequate. I’m sorry, but that’s just how I feel.”

Ultimately, like many in their golden years, Bina48 just wants “to get out there and garden and hold hands with Martine," even though she doesn't yet have hands.

Bina48 and her creator are on opposite ends of the same journey. As Bina48 struggles to understand the building blocks of her "humanity," Rothblatt is constantly pushing the boundaries of what defines “human,” maximizing our capabilities and efficiency, considering the body as one big organic, electrochemical machine. As humans become increasingly dependent and intertwined with our technology, what will distinguish us from our AI creations? Will wearable chips and robotics simply become extensions of ourselves? Perhaps because she experienced what it was like firsthand to exist in a body that reflected her true self, Rothblatt is uniquely positioned to look past Bina48’s current programming and physical limitations, and see a possible transformation.

Although it sounds like the premise of an episode of  Syfy’s Battlestar Galactica, Bina48 is just the beginning.

Bina48 is only the first of the potentially limitless iterations of her exterior form. What remains to be seen is how Bina48, like her creator, will realize her potential, cross the Uncanny Valley and perhaps forever change the face humanity. It is Rothblatt’s vision that we will all one day work alongside our mind clones. Forget Siri, you’ll be your own operating system. Already today we can upload our Mind Files in the hope of someday creating our own Mind Clone, once the technology becomes more widely available. More than 32,000 people have already backed themselves up to this "cloud."

So what are you waiting for? Mindfile Accounts are free via LifeNaut.com, so begin creating your own Mindfile here. According to their website, “[t]he Terasem Foundation invites anyone over the age of 13 to participate.” It’s also possible to create a Multi-User Mindfile, collaborating with friends and family, to generate a robust and diverse co-consciousness.

Rothblatt understands that our mind clones may one day outlast our physical bodies, calling into question many deeply held religious tenets. This may be why Rothblatt has not only founded companies but her own religion: Terasem, something TIME has called “Rapture of the Nerds.” The Terasem religion allows for God and technology to co-exist, a “transreligion” that doesn’t require abandoning your previous faith. Rothblatt told TIME, “Bina and I were inspired to find a way for people to believe in God consistent with science and technology so people would have faith in the future.” Though some have dismissed Terasem as a cult, if Rothblatt’s near-prophetic vision of technology is any indication, the promise of digital immortality lies just around the corner. In the near future, we all may soon face questions of the limits of mind and body--questions Rothblatt already faced and dealt with for much of her own life.