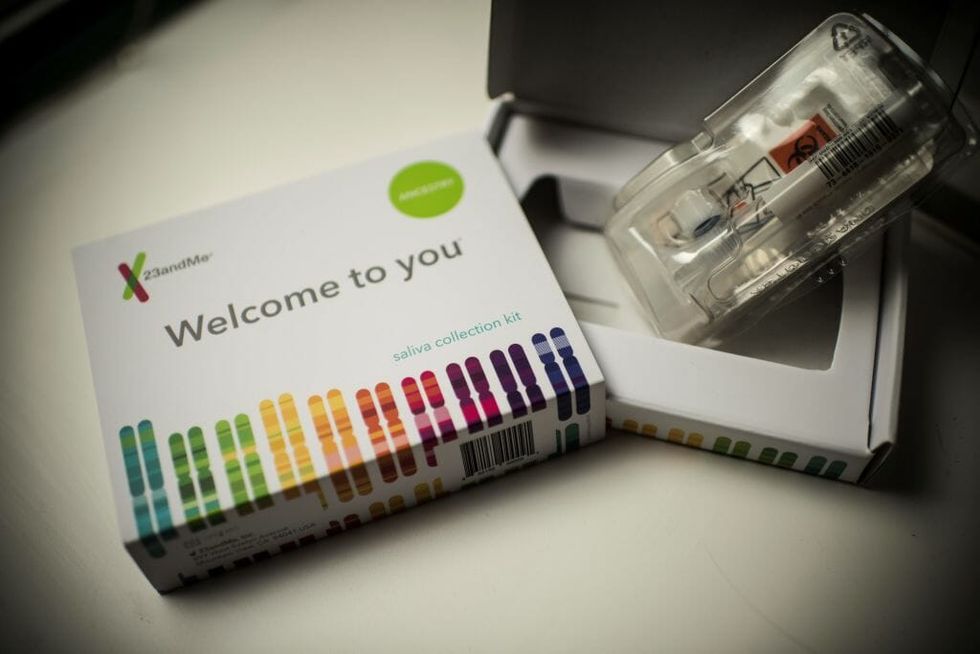 This illustration picture shows a saliva collection kit for DNA testing displayed in Washington DC on December 19, 2018. - Between 2015 and 2018, sales of DNA test kits boomed in the United States and allowed websites to build a critical mass of DNA profiles. The four DNA websites that offer match services -- Ancestry, 23andMe, Family Tree DNA, My Heritage -- today have so many users that it is rare for someone not to find at least one distant relative. (Photo by Eric BARADAT / AFP) (Photo credit should read ERIC BARADAT/AFP/Getty Images)

The test examines three genetic variants of Ashkenazi Jewish ancestry that have indicated a correlation to the cancer syndrome. It's the second time that 23andMe has been approved for a cancer test based on genetic mutations, with the first being a test for the BRCA gene which can act as a litmus test for the likelihood of developing breast cancer.

While the test is innovative in its being sold directly to the consumer, some have concerns.

As with the BRCA tests, some are worried that conducting the tests without medical consultation or supervision could give consumers a false sense of security based on a lack of information and doctoral correspondence. Hereditary colorectal cancer syndrome only accounts for about five percent of inherited colorectal cancer cases, so the test would be far from an assurance of benignity, a fact that may be overlooked by consumers.

It's only a small subset of colorectal cancers, and there are still concerns about educating consumers - BUT we're… https://t.co/IJsvyu6fnU
— Jay Ferro (@Jay Ferro) 1548267797.0

But the company brings with it a host of other concerns.

As mail order DNA testing becomes more prominent, many are concerned about matters of privacy, and the implications of DNA being collected by a private company.

Concerns are especially heightened when factoring in insurance policies.

@antoniogm @23andMe Having just finished reading CM I am awfully surprised you went ahead and got a 23andMe test? W… https://t.co/zvyNEPfZcI
— Lenina Crowne (@Lenina Crowne) 1548093045.0

@Steve_Lockstep I am a very pro-technology, but will not get my DNA sequenced until I must for life-threatening rea… https://t.co/epYC9eYLqi
— Eric Nelson (@Eric Nelson) 1547935277.0

Regardless of concerns, it doesn't look like the company will stop growing any time soon.