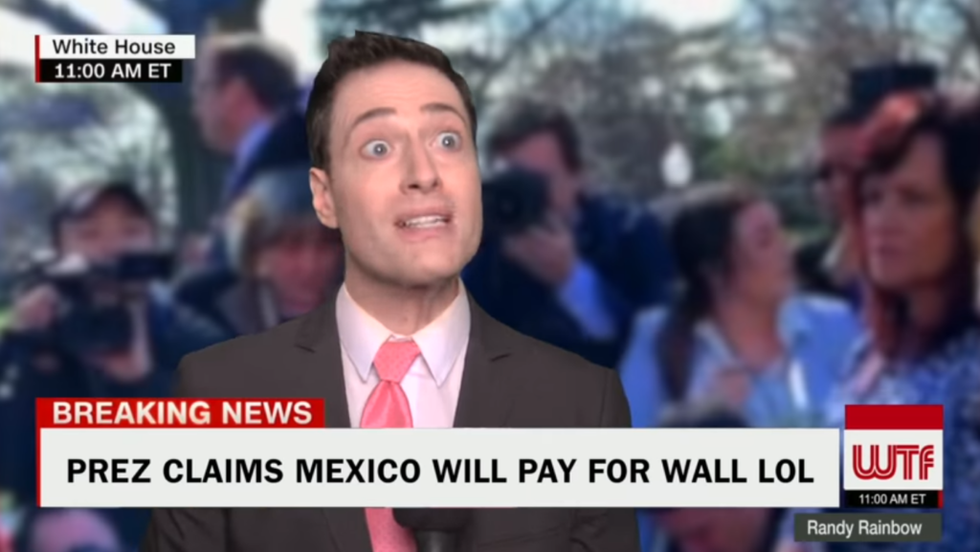 Rainbow takes Trump's weird sing-song during the speech about his "National Emergency" and uses it as an invitation to present his own question in song form.

"Some say you're just concocting this crisis to get the money for your wall," Rainbow says during the intro.

"Well, I mean, it was a wall, and then it was a fence? What's it going to be today, some chicken wire and an ADT security decal?"

"Border lies," sings Rainbow, "freaking us out while you dramatize."

With allusions to the Russia investigation, MAGA, Trump's campaign promises that Mexico will pay for his Wall, and even Right Wing pundit Ann Coulter's recent Twitter takedown about Trump failing to keep his promises, Rainbow makes 80s-themed magic in his takedown video.

OMG 😂😂😂 Made the TRAGIC mistake of watching this over breakfast. Laughed so fucking hard that I ended up spitting c… https://t.co/XUsVAdqWXH
— Axel Braun (@Axel Braun) 1550593249.0

Some used the video as a clapback at Trump himself.

.@RandyRainbow is a True Blue American. He shows Trump that it's Crazy For You to Express Yourself with your… https://t.co/g7AEqKszTH
— Shawn Hollenbach 🦄 (@Shawn Hollenbach 🦄) 1550596650.0

Who says politics and dance breaks are mutually exclusive?