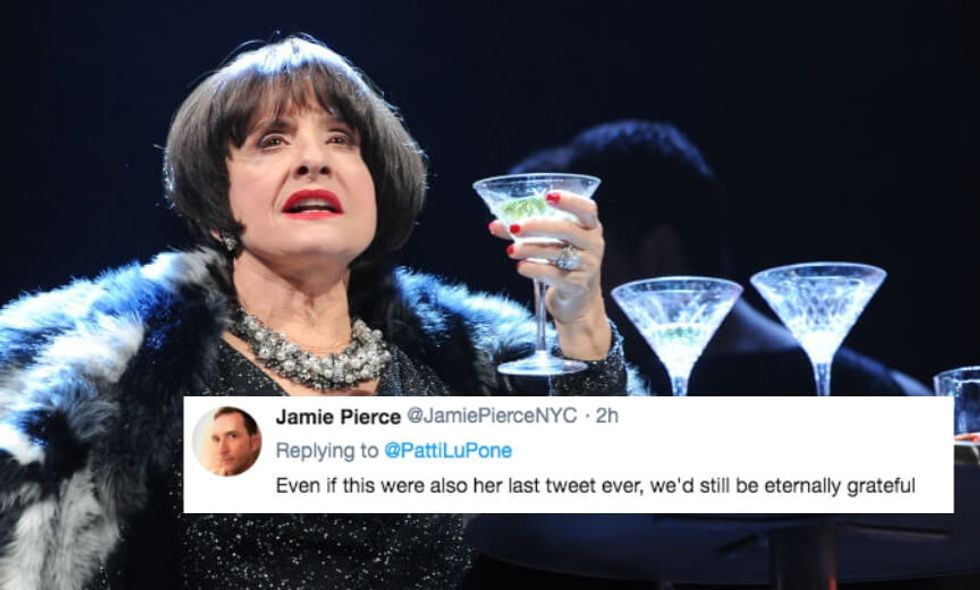 The diva—currently starring in the West End production of Company—is famously outspoken, whether she's dishing about Madonna or railing against Donald Trump. Now, fans of the two-time Tony winner will have a whole new medium to hear the Broadway legend's unfiltered opinions.

That's right, y'all: Patti LuPone is tweeting. This is not a drill. The queen who:

Stopped Gypsy mid-finale to yell at a photographer in the audience:

Was the original Evita on Broadway:

And the original Fantine in Les Miserables in London:

LuPone, who's slated to appear in season two of Ryan Murphy's POSE, joined Twitter all the way back in February, but it wasn't until Tuesday that she finally sent her first post.

Fans immediately responded with GIFs that captured their excitement.

It's the beginning of a new era.

@PattiLuPone She’s made her entrance. All tweets from now on will be marked as BP (before Patti) or AP (after Patti) https://t.co/vav4J19toa
— callmebymyshame (@callmebymyshame) 1554221367.0

@PattiLuPone Even if this were also her last tweet ever, we'd still be eternally grateful
— Jamie Pierce (@Jamie Pierce) 1554224631.0

We hope this tweet is the first of many.

Are you going to follow her? Why or why not? Let us know below!