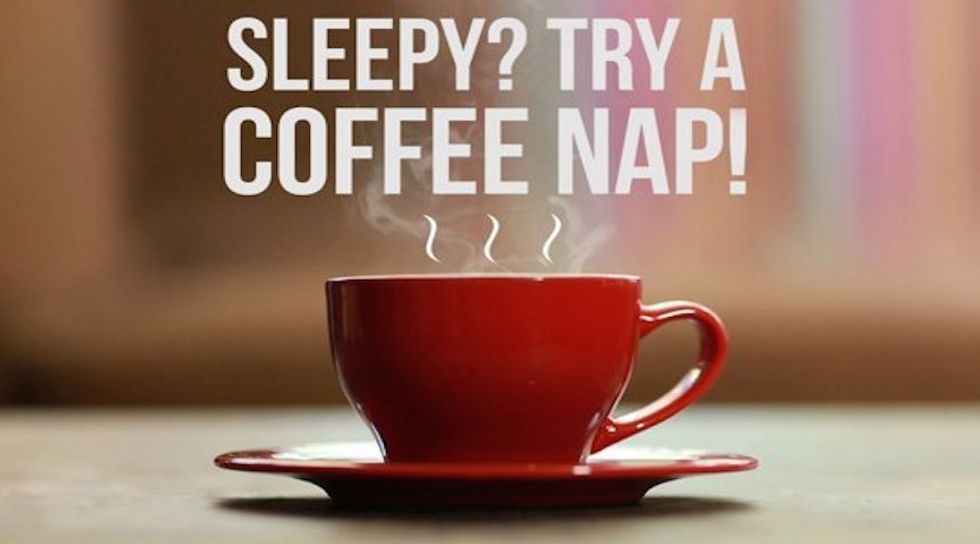 When exhausted, there are two viable options to recharge: a nap or a cup of coffee. And never the twain shall meet, right? The combination seems counterintuitive, but it may change life as you know it. According to Vox, “If you caffeinate immediately before napping and sleep for 20 minutes or less, you can exploit a quirk in the way both sleep and caffeine affect your brain to maximize alertness.” The coffee nap is percolating across the nation, with some offices even encouraging such power naps, discovering a new way to stave off the 2PM slump.

The Science Behind the Sleep

So how exactly do coffee naps work? Caffeine and adenosine, a drowsiness-inducing chemical compound, compete for receptors in the brain. Adenosine builds up in the brain when awake and disperses when asleep. Resting for 20 minutes allows the brain to clear away the adenosine to make room for the caffeine as it recharges your brain. "If you can fall asleep in your nap before caffeine does that, when it’s time to wake up, you’re getting the benefits of the caffeine perfectly timed with the nap sleep benefit," said sleep researcher Dr. David Dinges in an interview with The Huffington Post.

Scientists have observed the positive effects of the coffee nap, and experiments show that the caffeine/sleep combo works wonders for “maximizing alertness.” This NCBI study suggests that a 15 minute coffee nap counteracts the effects of sleepiness and impairments while driving. And this Japanese study found that those who took a caffeine nap before a

series of memory tests "performed significantly better on them compared to people who solely took a nap, or took a nap then washed their faces or had a bright light shone in their eyes.”

Ready to put the coffee nap to the test? Select your caffeinated beverage of choice, but remember soda and tea have less of a jolt than java. Here’s a handy caffeine chart for those who aren’t too keen on coffee. It’s important to consume the caffeinated beverage quickly so it will not counteract your rest. Vox.com suggests drinking iced coffee or espresso if you’re unable to drink a hot cup quickly.

Next, find a place to rest for up to twenty minutes as the caffeine enters the bloodstream. Sleepjunkies.com summed it up perfectly:  “Don’t delay, take the nap right away.” Even if you’re unable to fully fall asleep, a rest period will still suffice.

Remember not to rest longer than twenty minutes to avoid falling into a deeper sleep state. The caffeine will begin begin to stimulate your brain as you begin to take on the rest of the day.

With that, brew some coffee, close the blinds and unlock the secrets of the caffeine coma. Your brain will thank you.