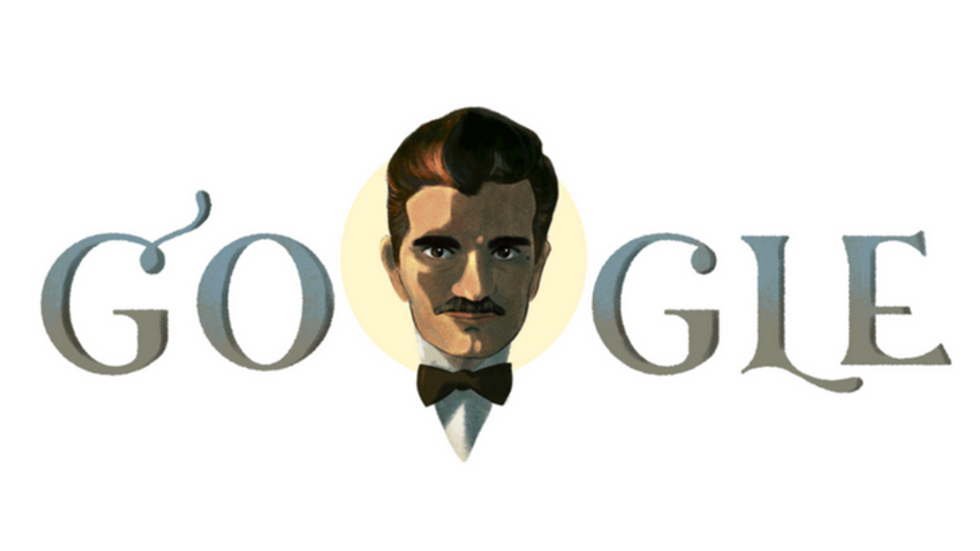 “Working gets in the way of living.” Wise words spoken by the subject of today’s Google Doodle, actor Omar Sharif. In honor of the Lawrence of Arabia star’s 86th birthday, Google is putting Sharif on the homepage of its prolific search engine with a simple animation that fits the actor’s elegant style perfectly.

Born in Alexandria, Egypt in 1932 as Michel Dimitri Chalhoub, Shari adopted the name Omar El-Sharif and began his acting career with a role in 1954’s The Blazing Sun. Since his initial appearance, Sharif saw much success that followed him up to his passing on July 10, 2015. The award-winning performer lived an 83-year-long life of intrigue that earned him recognition outside across multiple continents.

For a glimpse into Omar Sharif’s life and to better know the man behind today’s Google Doodle, here are five fast and fascinating facts about him.

His First English-Speaking Role Earned Him an Oscar Nominee

After starring in Egyptian cinema for eight years, Sharif made the switch to an English-speaking role with 1962’s Lawrence of Arabia. Director David Lean considered other actors like Horst Buchholz, Maurice Ronet, Dilip Kumar, and Alain Delon before having to switch Sharif from the role of Lawrence’s guide, Tafas, to Sherif Ali.

He Converted to Islam for Love

Though the two would divorce 19 years later, Sharif converted to Islam in 1955 to marry Faten Hamama. Sharif and Hamama had one child before splitting up in 1974 after Sharif self-exiled himself in Europe over trade restrictions imposed by Egyptian president Gamal Abdel Nasser. This wasn’t the last time he would undergo a faith conversation, either.

Long after his divorce, Sharif converted from Islam to Kabbalah, a Jewish mystic sect. Confirmation of his conversion came in 2012, but rumors started to surface in 2010 after he was seen attending religious meetings for European Jews. It was at these meetings, Sharif says, that he was convinced to change his faith.

The Controversy of “Funny Girl”

During his 19-year marriage to Faten Hamama, Sharif was given a role in William Wyler’s romantic musical comedy-drama, Funny Girl. Released in 1968, the film starred Barbra Streisand in the lead role alongside Omar Sharif. It was revealed that, during production, Streisand and Sharif had an affair, and while that was controversy enough, Funny Girl was already drenched with drama.

While filming, the Six-Day War between Israel and Egypt started, prompting studio executives to consider replacing Sharif for his Egyptian roots. Between his role in the film and the affair with a vocal Israeli supporter, Egypt threatened to withdraw his citizenship.

He Didn’t Initially Ask for the Role of Dr. Zhivago

For his portrayal of the titular Dr. Zhivago, Sharif walked away with the Golden Globe for Best Actor and was presented with the Laurel Award for Dramatic Performance. Ironically, when he first approached director David Lean about appearing in the film, he only asked to do so as Pavel Antipov. Instead, Tom Courtenay was given the role of Antipov while Sharif was cast in the role of Dr. Yuri Andreyevich Zhivago.

To better fit into the role of the doctor and look less “Egyptian,” Sharif taped back his eyes, straightened his hair, and waxed his skin.

Acting Runs in the Sharif Bloodline

Sharif may have passed away, but the acting bug lived on briefly through his son, Tarek Sharif, and grandson, Omar Sharif, Jr. While Tarek only starred in the 1969 film Avalanche and in Doctor Zhivago as eight-year-old Yuri, Omar Sharif, Jr. has spent a bit more time in the spotlight.

Early in his career, Sharif, Jr. starred in the Egyptian miniseries Wagh el qamar, Egyptian film Hassan wa Morcus, the Canadian series Virginie, the 2016 Irish film The Secret Scripture, and the 2017 film 11th Hour alongside Salma Hayek. Beyond acting, Sharif, Jr. has been an advocate for gay rights after coming out in The Advocate and served as the National Spokesperson for the Gay and Lesbian Alliance Against Defamation from 2013 to 2015.

@OmarSharifJr - Opens up about being a gay Egyptian looking for Hope. A Voice for the Voiceless: Amidst a brutal cr… https://t.co/K7mz2JvMYq
— Instinct Magazine (@Instinct Magazine) 1515720302.0