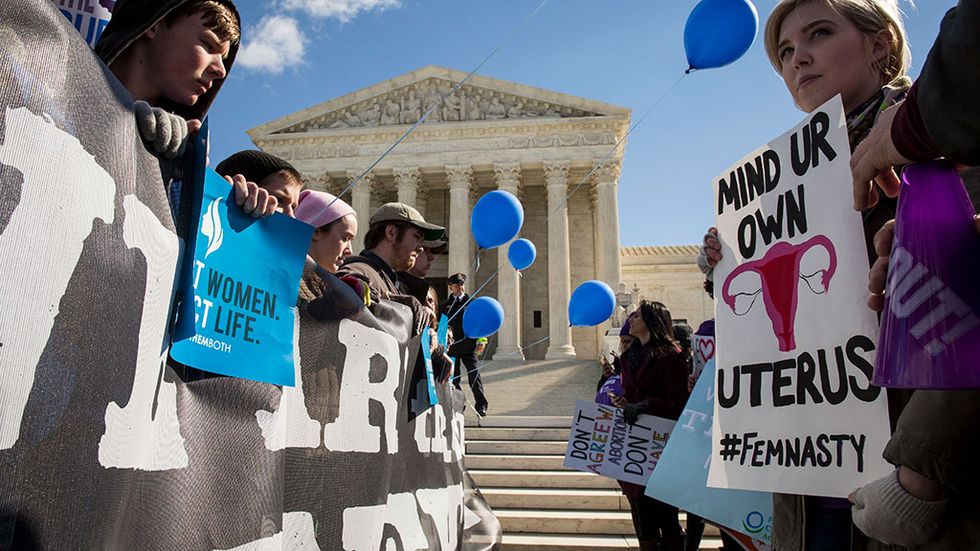 An Oklahoma bill that would require that a woman get written consent from the fetus’s father prior to obtaining an abortion passed out of a House committee earlier this month. The vote was 5 to 2.

The bill, H.B. 1441, also requires that the women provide, in writing, the identity of the father to the physician who would perform the abortion.

A second bill, H.B. 1549, which would prohibit women from obtaining an abortion because the fetus has, or is suspected to have, a genetic abnormality, also passed committee, 5-2.

The author of the bill, Rep. Justin Humphrey (R), explained why he introduced the bill. “I believe one of the breakdowns in our society is that we have excluded the man out of all these types of decisions.” He continued, “I understand that [women] feel like that is their body. I feel like it is a separate—what I call them is, is you’re a ‘host.’ And you know when you enter into a relationship you’re going to be that host and so, you know, if you pre-know that then take all precautions and don’t get pregnant.”

Humphrey continued, “So that’s where I’m at. I’m like, hey, your body is your body and be responsible with it. But after you’re irresponsible then don’t claim, well, I can just go and do this with another body, when you’re the host and you invited that in.”

The Supreme Court struck down a similar law in 1992, in the case Planned Parenthood v. Casey. In that case, the Supreme Court held that requiring spousal notification was an undue burden on the woman’s right to abortion.

The Supreme Court found that while a father has an interest in the welfare of the child, before birth, those rights are not coequal with the mother. “The husband’s interest in the life of the child his wife is carrying does not permit the State to empower him with this troubling degree of authority over his wife,” the court concluded. “A husband has no enforceable right to require a wife to advise him before she exercises her personal choices. . . . A State may not give to a man the kind of dominion over his wife that parents exercise over their children.”

The law struck down in Casey, it should be noted, was far less restrictive than the Oklahoma bill. The Casey law was limited to married couples and required notification, not consent. It also contained many more exceptions for the woman, including, importantly, if pregnancy was the result of spousal sexual assault, or if the woman believed that notifying the husband would cause him or someone else to inflict bodily injury upon her. The Oklahoma carves out no such safety exceptions for the woman.

Reverend Shannon Speidel of the Oklahoma Coalition for Reproductive Justice, called the bill “troubling” for its failure to take into account the potential danger notifying the father could cause the woman. “In a state that doesn’t really spend a lot of time on domestic violence issues it really just showed ignorance regarding what relationships can be for some women.”

“It is shameful that Oklahoma politicians advanced this measure, which is demeaning, patently unconstitutional, and puts women in abusive relationships at risk,” said Amanda Allen, senior state legislative counsel for the Center for Reproductive Rights.

“[I]t is immoral and anti-Christian to pass restriction after restriction and then do nothing to support women and families in this state,” said Speidel. “If you really want to make abortions be gone, then do everything possible to provide birth control, to have comprehensive sex education and, more importantly, to make sure there are programs in place that are going to help women and families.”

Should the bill be passed, it would go into effect in November of this year.