How The Red Menace Spawned a Christmas Tradition: The Story of the NORAD Santa Tracker 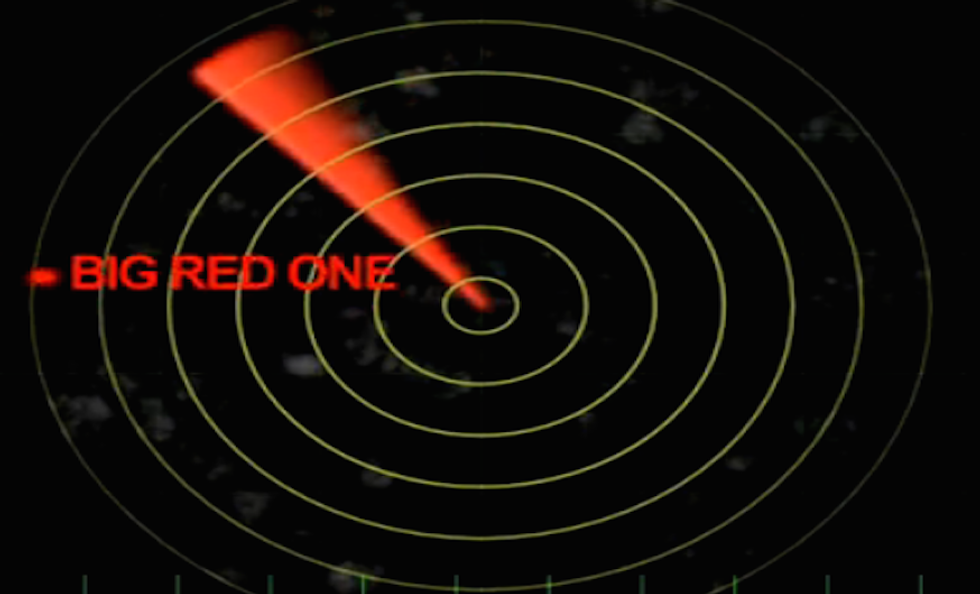 On December 24, families across the world will snuggle their children, sing Christmas carols, and nibble on candy canes, all while engaging in that age-old Christmas Eve pastime: tracking the flight of Santa Claus and his reindeer across the skies on their computer screens. The website, NoradSanta.org may be relatively new, but the idea behind it is sixty years old. And it almost never happened but for a Sears advertisement in December 1955.

The North American Aerospace Defense Command, or, NORAD, is a bi-national effort by American and Canadian governments to track and monitor the skies above the continent for any indication of an air strike by enemy aircraft. In its early days, it was known as CONAD, or Continental Air Defense Command. The story of the NORAD Santa Tracker begins with a special red telephone on the desk of the CONAD commander in chief.

A Myth Within A Myth

By 1955, the Cold War was well underway, inducing widespread hysteria over potential Soviet military airstrikes. In response, CONAD had established a special telephone line that, if it were to ring, would alert the headquarters to Soviet warplanes in North American skies. In the Colorado CONAD headquarters, a dapper and charismatic Colonel Harry W. Shoup was in charge when the red phone one day began to ring.

When Col. Shoup answered, he got a surprise: A small boy asked to speak to Santa Claus. Suspecting a prank, Shoup interrogated the child until the mother took the phone, with wailing in the background. Shoup quickly realized what had happened, then also realized he would be getting similar phone calls all night long. In an act of kindness that sparked a cherished holiday tradition, the Colonel, a father of four, decided that children

callers must be told that Santa was enroute to their homes, having been tracked meticulously by the U.S. Air Force, from the North Pole to the homes of good children of America. Shoup instructed his staff to give all children who called a "current location" for Santa Claus.

Here’s where the origin story gets murky. According to the popular myth, a local Sears store unwittingly had printed the number to the red phone in its holiday “Talk To Santa” ad, which was only discovered when, a few days before Christmas, children began calling into the top secret doomsday telephone line asking to speak to Santa Claus.

But that’s not actually what happened.

While a small child did call the number listed in the Sears’ ad asking to speak to Santa Claus, it turns out the child had misdialed the number and reached the CONAD hotline by accident. There were no scores of children inundating the line, and the little boy actually called on November 30th.

CONAD had been grappling with a thorny public relations problem, however, of how to “justify its existence to adults and soften its image with children.” The adults got a onslaught of Cold War films to convince them of the need for such surveillance. The kids got the Santa Tracker.

It was a clever strategy. When their parents explained that NORAD was “Santa’s helpers” rather

than “sky police poised to obliterate Russia,” this tended to go down better for both children and adults.

NORAD’s Santa tracker program is one of the most successful military PR campaigns of the last century. Even today, public relations textbooks cite it for how to run a Christmas-themed campaign. The general public remains enthralled by the idea, and the government still watches the skies, so the tradition of disguising surveillance as fun continues to everyone’s benefit.

The real value of the misdial was in planting the seed. Who better than the Jolly Old Elf to join the fight against the Red Menace? The following Christmas Eve, the military fully embraced the idea of Santa being protected by American forces. Santa became the benevolent face of NORAD’s campaign to squash the Communist threat.

On Christmas Eve, 1995, the following story by The Associated Press appeared in newspapers across the country:

CONAD said first reports of its radar and ground observer outposts indicate Santa was traveling about 45 knots at an altitude of 35,000 feet and should

arrive in the United States early Saturday night for his annual visit.

U.S. and Canadian defense units will steer him into the prevailing jet stream which should double his speed, and around stormy weather west of the Hudson Bay areas.

CONAD, Army, Navy and Marine Air Forces will continue to track and guard Santa and his sleigh on his trip to and from the U.S. against possible attack from those who do not believe in Christmas.

And Santa’s track, being plotted here on the main surveillance board, is a very wide one, indicating that his sleigh is heavily loaded with toys and goodies.

Santa in the 21st Century

Today the NORAD Santa website and hotline, 1-877-HI-NORAD, are manned by volunteers and visited by believers of Santa from all over the world. Satellites, radar, and other high-tech instruments track the movement of the sleigh and reindeer, while jets allegedly escort Santa safely through the skies. Now in 2015, the red doomsday phone is no more, but families can use online tools, a phone app, email, or call to find out how soon Santa will get to their own home. Parents all over the world can thank Colonel Shoup for indirectly motivating children to go to bed willingly on Christmas eve.

As Gerry Bowler, a professor of history at the University of Manitoba, noted, the NORAD Tracks Santa program is "one of the few modern additions to the centuries-old Santa Claus story that have stuck." Bowler stated that the program "takes an essential element of the Santa Claus story — his travels on Christmas Eve — and looks at it through a technological lens," therefore bringing the Santa Claus mythology into the modern era."

To track Santa and his crew, visit www.NORADSanta.org, email noradtracksanta@outlook.com, or call 1-877-HI-NORAD, or use the Windows 10 app on mobile devices.