Hillary Clinton Had a Hilarious Grammys Cameo but Trump's Ambassador to the U.N. Is Not Amused 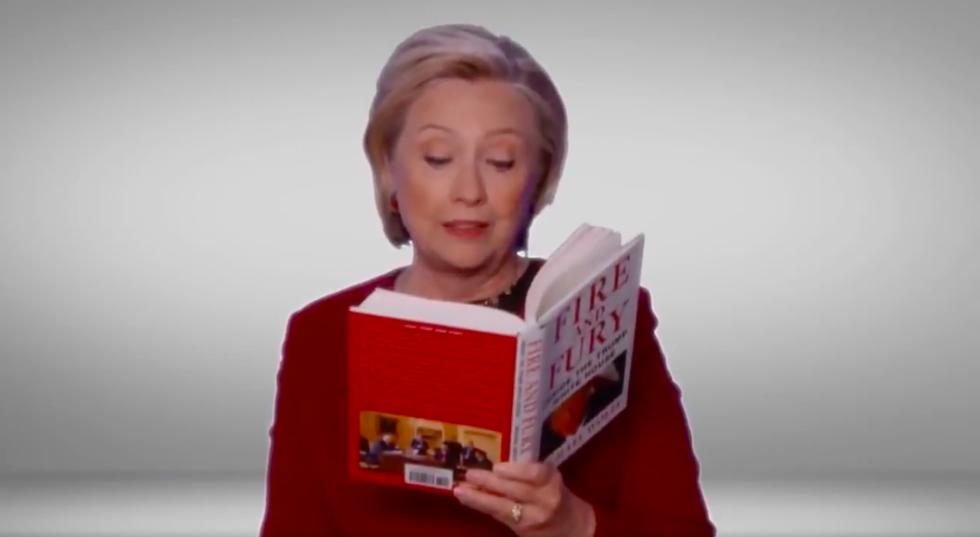 Hillary Clinton reads from Michael Wolff's "Fire and Fury: Inside the Trump White House" during a surprise appearance at last night's Grammy Awards. (Screenshot via Twitter)

Hillary Clinton made a surprise appearance at last night's Grammy Awards, and Nikki Haley, President Donald Trump's Ambassador to the United Nations, was not amused.

The awards ceremony featured Hillary Clinton among others reading sections from Michael Wolff's controversial book, Fire and Fury: Inside the Trump White House. The book became a runaway bestseller after the Trump administration tried unsuccessfully to halt its publication. Comedian James Corden, who hosted last night's event, had several celebrities jokingly audition for the narrator role for the audiobook to compete for next year's Spoken Word Album. "We know that our current President does love winning awards and the good news for him is he may just be the subject of next year's winner," Corden quipped.

The skit became a viral hit almost immediately, and Haley took to Twitter to decry the insertion of politics into what she believed should have remained a night of casual entertainment. "I have always loved the Grammys but to have artists read the Fire and Fury book killed it. Don’t ruin great music with trash. Some of us love music without the politics thrown in it," tweeted Haley.

@nikkihaley Tell you what, you keep religion, discrimination and bigotry out of politics and maybe the musicians wo… https://t.co/Wumz8T0NMM
— Kris Wood (@Kris Wood) 1517232534.0

Recent news reports suggest Haley's disgust for the segment might be personal. In an interview with Politico, Haley shot down any and all insinuations that she'd had an affair with the president. As Politico reported:

The online speculation was instigated by “Fire and Fury” author Michael Wolff, who dropped hints on HBO’s “Real Time with Bill Maher” last week when he said he was “absolutely sure” Trump is having an affair — just not sure enough to write about it in his book. Wolff went on to say that discriminating readers would be able to determine the president's paramour by giving his book a close reading: “Now that I've told you, when you hit that paragraph, you're gonna say, 'Bingo.'”

Readers quickly homed in on a single sentence in the runaway best-seller, which has been criticized for everything from sloppy copy editing to gross factual inaccuracies. Wolff writes, “The president had been spending a notable amount of private time with Haley on Air Force One and was seen to be grooming her for a national political future.”

“It is absolutely not true,” Haley told the news outlet. “I have literally been on Air Force One once and there were several people in the room when I was there. He says that I’ve been talking a lot with the president in the Oval about my political future. I’ve never talked once to the president about my future and I am never alone with him.”

Haley added that Wolff was adding to the attacks successful women face when others imply they've achieved their success by sleeping their way to the top. “So the idea that these things come out, that’s a problem,” she said. “But it goes to a bigger issue that we need to always be conscious of: At every point in my life, I’ve noticed that if you speak your mind and you’re strong about it and you say what you believe, there is a small percentage of people that resent that and the way they deal with it is to try and throw arrows, lies or not.”

During Trump's presidential campaign, Haley, then the governor of South Carolina, made it clear that she was "not a fan" of the billionaire businessman, and seemed to position herself as one of his more prominent detractors. But when Trump bested Marco Rubio––Haley's chosen candidate––during the South Carolina primary, Haley, Politiconotes, discovered that "Trump’s unexpected rise seemed to serve as a rebuke" to the Republican Party she had always known.

Shortly after his election, Trump asked Haley to join his administration in her capacity as Ambassador to the United Nations. In December 2016, The Washington Post reported that Trump had made his cabinet decisions, both men and women, largely based on looks, and quoted Trump transition spokesman Jason Miller as saying, "Presentation is very important because you’re representing America not only on the national stage but also the international stage, depending on the position."

For her part, Haley has her fair share of defenders, like Fox News contributor Katie Pavlich, who suggested that the left-wing's enthusiastic support for Clinton's Grammy Awards appearance––is the height of hypocrisy.

“When I see Hillary Clinton and other liberal politicians join forces with celebrities or try to show America how in touch they are, I don't take it all that seriously,” Shah, a deputy White House press secretary, said during a segment of Fox and Friends. “You know, the left and the elite centers of America are frankly out of touch with what's going on in this country and all the great work that this president is doing. And I wouldn't take a whole lot of what you see on a Sunday night Grammy appearance by celebrities attacking president all that seriously.”

When asked if Trump had watched the awards ceremony, Shah said, "You know, I don't know if he watched it. But I wouldn't take the words of these celebrities or these liberal politicians all that seriously.”