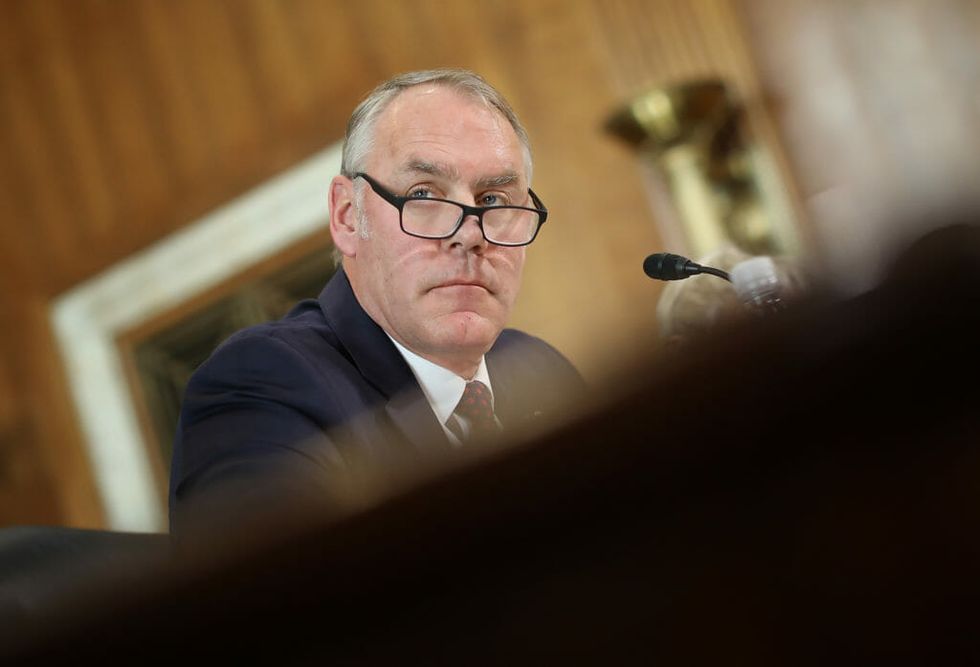 Donald Trump's Secretary of the Interior Ryan Zinke, currently under scrutiny for spending $130,000 of taxpayers' money on new doors for his office, is under fire again, but for a completely different reason.

When asked whether the US would keep giving grants for preserving the history of Japanese-American confinement, Int… https://t.co/fiOuq3IGnk
— BuzzFeed News (@BuzzFeed News) 1521166920.0

During a House budget hearing for the Interior Department, Zinke offered a callous, racially-veiled response to a question asked Congresswoman Colleen Hanabusa (D-HI).

Hanabusa wanted to know why Zinke cut funding for the Japanese American Confinement Sites Grant, a program that protects historic camps in which Japanese-American citizens were detained during World War II.

“I did not find out about the fact that my grandfather was interned on Oahu for a lot of the wartime until he was eightysomething years old because they didn’t speak about it,” Hanabusa said, emphasizing the historical value of the JACS program. “So Mr. Secretary ... even with the president zeroing it out, are you committed tocontinue the grants program? Will we see it funded again in 2018?”

When asked whether the US would keep giving grants for preserving the history of Japanese-American confinement, Int… https://t.co/NKJmgk8cX9
— Kate Nocera (@Kate Nocera) 1521158965.0

Zinke's comments received some harsh criticism from activists and lawmakers.

“I was outraged,” said Karen Korematsu, founder and executive director of the Fred T. Korematsu Institute, which gets its funding through Jacs, “first by Secretary Zinke’s disrespect to Rep. Hanabusa and second to his ignorance to teaching the lessons of American history.”

Senator Mazie Hirono (D-HI) sent Zinke a tweet in which she called his comments "flippant and juvenile."

Senator Tammy Duckworth (D-IL) responded on Twitter as well. "Nope, racism is not okay," she wrote.

Representative Grace Meng (D-NY) said Zinke's choice of words was "blatantly insensitive" and demonstrate "behavior that a cabinet secretary should not exhibit."

My colleague asked Sec. Zinke a serious question about gov't funding and received the response "Konnichiwa". This b… https://t.co/cw5smcmlor
— Grace Meng (@Grace Meng) 1521149247.0

"The patronizing racism and privilege" made Jeff Yang "tremble with rage."

Several women who attended the hearing, some of whom are descendants of Japanese-American citizens that were forced into internment camps, were plainly shocked by the secretary's comments.

“The injustice of the World War II incarceration of Japanese Americans was due to the very racist sentiments unintentionally exhibited in Secretary Zinke’s flippant comment, that Japanese Americans were and are perpetually foreign,” JACL said to TPM on Friday. “If anything, Secretary Zinke’s comment clarifies and reinforces the need for full funding of the JACS program. … We urge Congress to continue funding of the JACS program at the same level as years past.”