We Now Know What Donald Trump Considers the Biggest Mistake He's Made As President, and Of Course It Is 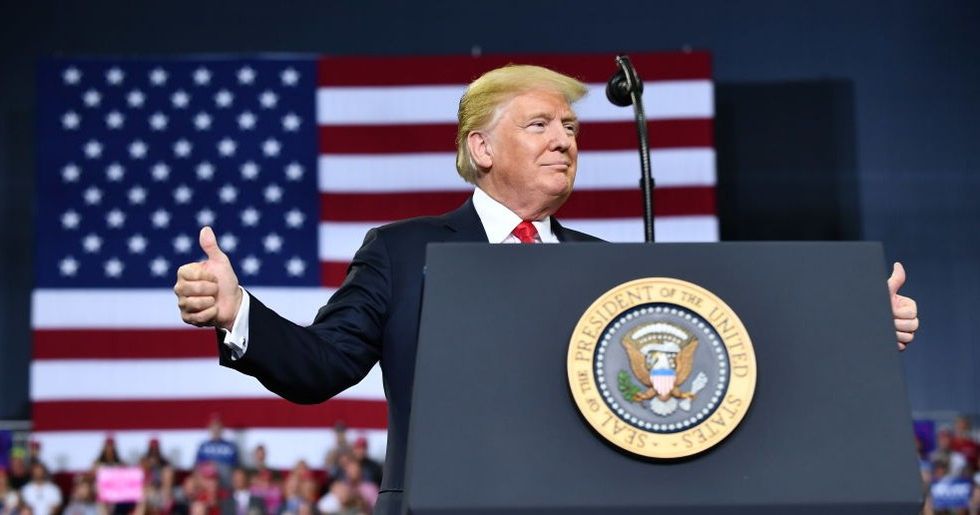 While President Donald Trump peppered his Twitter feed and interviews with attempts to discredit Bob Woodward and his new book, Fear: Trump in the White House, more excerpts came out. The latest involves Trump and his reaction to the violence at the Unite the Right rally in Charlottesville, Virginia in August 2017.

One person—Heather Heyer—died and 19 others injured when a 20-year-old man with ties to white supremacist groups drove his car into a crowd of counter protesters. Trump's initial reaction infamously blamed "many sides."

After the attack and various public statements by the President, Woodward's book claims Trump stated:

"That was the biggest f---ing mistake I’ve made... [and the] worst speech I’ve ever given."

Only the President did not mean when he refused to condemn white supremacists, the Ku Klux Klan or neo-Nazis. Trump referred to the speech where he did condemn racism and racists.

Immediately following the murder of Heather Heyer by a white supremacist and the injuring of 19 others, Trump tried to remain neutral. While he said the attack was bad, there were guilty parties and bad people on many sides.

On the Saturday that the attack occurred, the President stated:

"We condemn in the strongest possible terms this egregious display of hatred, bigotry and violence, on many sides. On many sides."

So Monday—reading from a teleprompter—the President condemned racism. In his prepared remarks, Trump read:

"Racism is evil and those who cause violence in its name are criminals and thugs, including the KKK, neo-Nazis, white supremacists and other hate groups that are repugnant to what we hold dear as Americans."

Later, in front of his aides and advisers, the President made it clear he hated the speech he just made condemning white supremacy and racism. It was now that he stated, "That was the biggest f---ing mistake I’ve made..." and the "worst speech I’ve ever given."

While Trump may get all of his remaining White House staff mentioned in Fearto sign statements disavowing Woodward's book so the President can post them on Twitter, this particular claim from Fear easily rings true based on public records.

One day after the President read from a teleprompter to condemn racism, he spoke candidly to reporters at Trump Tower in New York City. He reiterated his initial statements claiming blame for an attack by a white supremacist on a crowd of counter protesters rested on "both sides."

On that Tuesday in August 2017, Trump stated:

"And nobody wants to say that. But I'll say it right now. You had a group on the other side that came charging in without a permit, and they were very, very violent."

While Trump's Tuesday walkback of his Monday official statement garnered mostly criticism, it did draw high praise from one source.

David Duke, former Grand Dragon of the KKK took to Twitter to post his thanks for the support.

Thank you President Trump for your honesty & courage to tell the truth about #Charlottesville & condemn the leftist… https://t.co/7LxWB0FaWi
— David Duke (@David Duke) 1502829928.0

However both Democratic and Republican legislators as well as people across the country took issue with Trump's support for white supremacy.

"Apologize. Racism, bigotry, anti-Semitism of any form is unacceptable. The leader of the free world should be unambiguous about that. I don't think anybody should be looking at getting props from a grand dragon of the KKK as any kind of sign of success."

The President never did apologize and Washington DC moved on to the next scandal soon after.

As Trump escalates his attacks on Woodward on Twitter to counter the claims made in Fear: Trump in the White House, people are taking a closer look at who Woodward is and how he works.

Woodward’s book is based on hundreds of hours of interviews with first-hand sources, as well as meeting notes and personal diaries, files and documents. Woodward disclosed this to the President in an August phone call where both men acknowledge the award winning investigative journalist did try to speak to Trump. Kellyanne Conway also confirmed she passed on a meeting request from Woodward through the proper channels.

Woodward was one half of the famed Watergate expose team of Woodward and Bernstein with Carl Bernstein. Their book, All the President's Men, told the story of their arrival at The Washington Post and their involvement in the reporting on the scandal that eventually led President Richard Nixon to resign.

Since joining The Washington Post staff in 1971, Woodward authored 18 books on Washington politics and covered every President since Nixon. He still works as an associate editor at The Washington Post. His reputation for thorough and fair, but honest accounts is well established.

The President began his attacks against Woodward on Twitter on Tuesday, September 4. Since then he tweeted 10 times trying to discredit Woodward and Fear: Trump in the White House, including asking for changes to federal law.