Poll Shows How Donald Trump Would Fare Against Women Candidates in 2020, and Yeah, He's Not Going to Like This One Bit 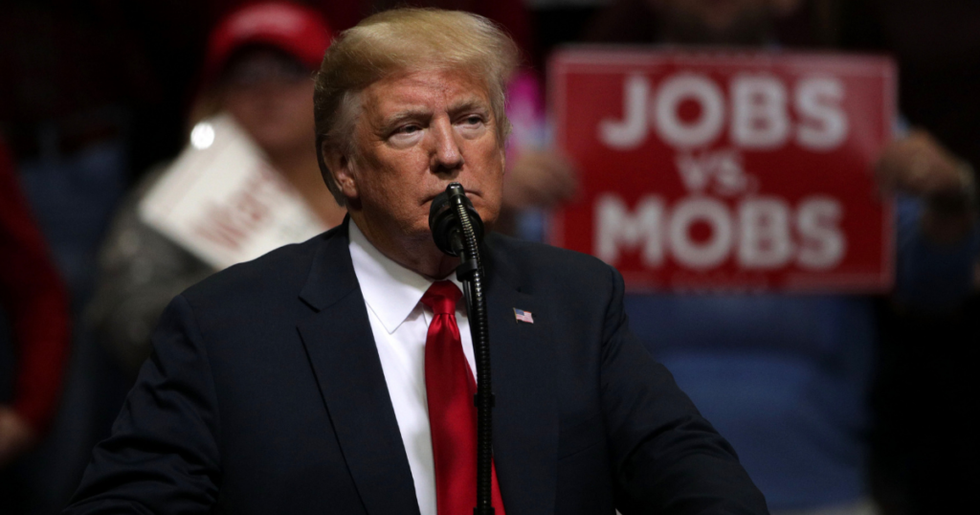 CHATTANOOGA, TENNESSEE - NOVEMBER 04: U.S. President Donald Trump speaks during a campaign rally for Rep. Marsha Blackburn (R-TN) and other Tennessee Republican candidates at the McKenzie Arena November 4, 2018 in Chattanooga, Tennessee. Blackburn, who represents Tennessee's 7th Congressional district in the U.S. House, is running in a tight race against Democratic candidate Phil Bredesen, a former governor of Tennessee. The two are competing to fill the Senate seat left open by Sen. Bob Corker (R-TN), who opted to not seek reelection. (Photo by Alex Wong/Getty Images)

Will 2020 be the year a woman finally makes it to the Oval Office? An exclusive new poll shows President Donald Trump losing in a landslide in 2020 to an array of women considered likely contenders for the nation's highest office.

Some of the women have never held elected office.

Former First Lady Michelle Obama, though she has explicitly said she is not running, holds a whopping 13-point edge - 55 to 42 percent - over Trump in a hypothetical matchup. Additionally, Obama's favorability is 31 points higher than Trump's.

Oprah Winfrey, who is hitting the campaign stump for Democrats ahead of Tuesday's midterms, bests Trump 53 to 41 percent. In terms of who is more favorable, those surveyed chose Winfrey by 24 percent.

Others, however, are currently in power. And if they run, it could be curtains for the 45th president.

New York's Kirsten Gillibrand, the successor to Hillary Clinton, edges out Trump by six points. Her favorability is tied with Trump.

Even Hillary Clinton, whose 2016 loss still stings liberals, would defeat the incumbent president 50-45 percent, according to the survey. Clinton's favorability, however, is 25 points less than Trump's the poll indicates. Clinton has said she has no intention of running, however the door remains open. Last week she said she'd "like to be president" and would address the possibility of a third White House bid after the midterms.

Senator Elizabeth Warren (D-MA) would beat Trump by two points, 49-47 percent, the poll says, but her favorable ratings are 16 points lower than Trump's.

On Twitter, people are cautiously optimistic about 2020, given what happened in 2016.

@PhilippeReines If we lose this one in two days I have doubts we ever have real elections again
— Maximus Pigamus (@Maximus Pigamus) 1541392580.0

Some, though, are excited over the prospect of Trump getting trounced by a woman.

The survey also shows that Trump is deeply unpopular among women.

"Trump is underwater with women voters (64% of women view him unfavorably)," Axios notes, "and particularly among white suburban women — a group that will be critical in 2020."

Trump's approval rating, the poll shows, has flatlined, with only 40 percent of respondents approving of the job he's doing.

Axios explains why Trump has lost so much support among women.

"Many of Trump's controversial moves — from child-separation policy at the Mexico border to the Supreme Court confirmation of Brett Kavanaugh — have eroded his support among women voters. The #MeToo movement and record number of women running for office this year have also helped to empower women in the political sphere."