Trump Campaign Official Tried to Claim People Are Lying About Trump's Racist Tweets, But His Own Tweet Had the Receipts 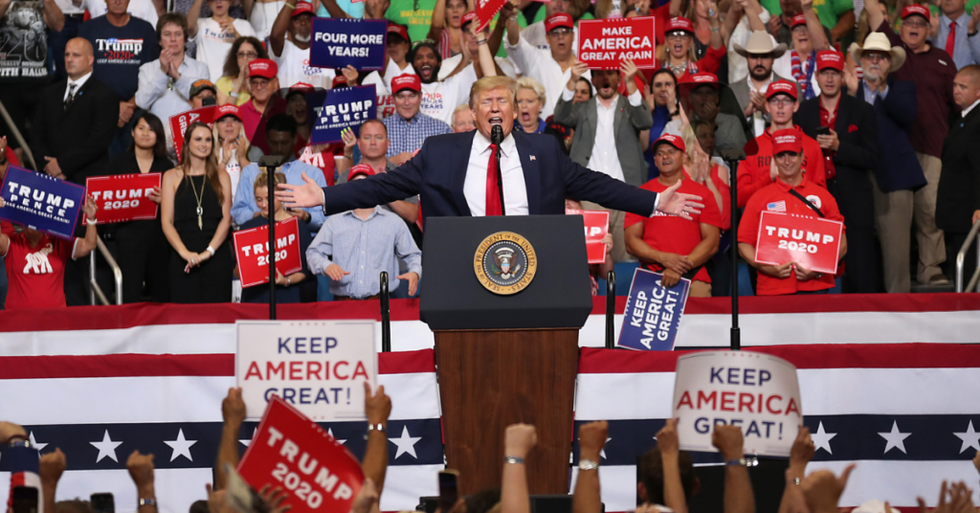 President Donald Trump speaks during his rally where he announced his 2020 candidacy on June 18, 2019 in Orlando, Florida. (Photo by Joe Raedle/Getty Images)

The President's recent Twitter activity dominated the news after several controversial posts by Trump on Sunday, so Wolking's team was deployed to provide a response. In keeping with their employer's tactics, Wolking posted that what people read from Trump's official Twitter account was not what they read.

With screengrabs of the President's tweets, Wolking posted:

"Anyone who says the president told members of Congress to go back to where they came from is lying."

His justification for telling four American citizens, three of whom were born in the United States to "go back" to the "countries" they came from? Trump told them to come back again once they fixed their own countries.

Wolking's doublespeak failed to exonerate the President however since it missed the issue entirely. These four Congresswomen of color are from the United States.

Their country is the United States. The notion that only White United States citizens are "real Americans" is a White nationalist talking point that ignores the fact White people are not Indigenous to any parts of the Americas.

It was this repetition of White supremacist and White nationalist rhetoric that people took exception to and Wolking failed to address. And people were quick to let Wolking know he missed the mark.

People noted there are plenty of outspoken White members of Congress, yet Trump never suggested they go back to the countries they came from.

@QuiggsJenny @MattWolking He literally say “go back to your countries and fix them and then come back and show us h… https://t.co/WXgQjuWMif
— I Side With Facts (@I Side With Facts) 1563121365.0

Some pointed out other messages that are not really there except when they actually are.

Although some thought Trump hit the nail on the head without meaning to, something Hillary Clinton also pointed out.

@MattWolking 3 were born in the USA so basically they are already doing what he is telling them to do. However, that is not what he meant.
— Artist Gail (@Artist Gail) 1563117153.0

Many called Wolking a liar.

But Wolking tried to pull out a win anyway.

@MattWolking Are you not embarrassed by this? I have seen spinning before, but this is pathetic. Even though your… https://t.co/PO5xLQMOYV
— Fred Guttenberg (@Fred Guttenberg) 1563135674.0

The Republican party and the President's most fervent support base, Evangelical Christians, remained largely silent about the controversy until the backlash continued to dominate the news on Monday. Their eventual responses are being criticized as being tepid at best.

Meanwhile President Trump demanded an apology from the four United States citizens he told to go back where they came from.