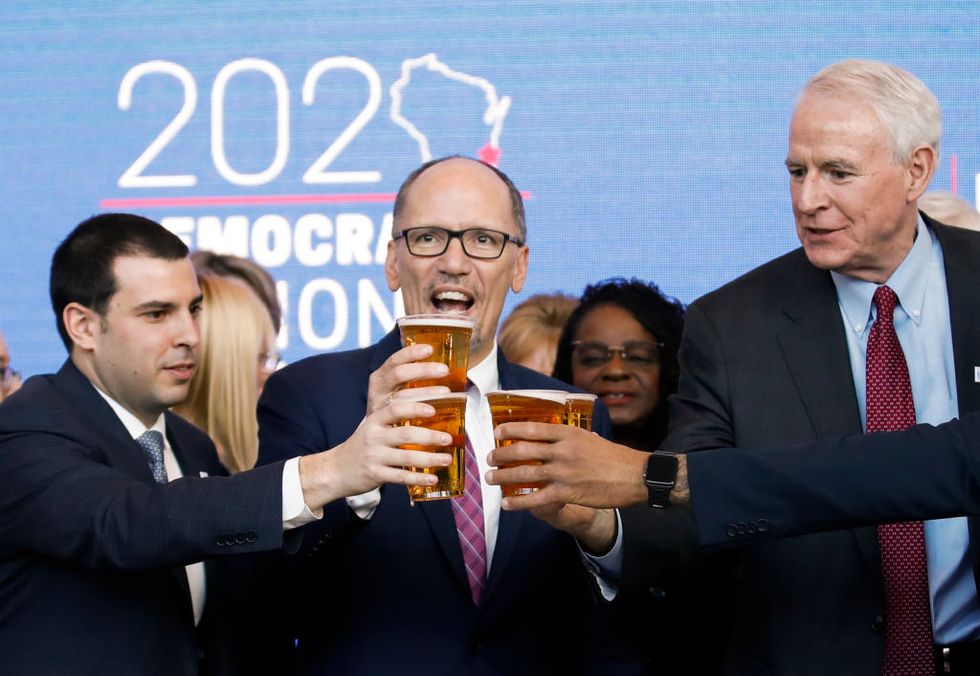 Milwaukee Mayor Tom Barrett (R) and Chair of the Democratic National Committee Tom Perez (C) toast with a beer during a press conference at the Fiserv Forum in Milwaukee, Wisconsin on March 11, 2019, to announce the selection of Milwaukee as the 2020 Democratic National Convention host city. - Democrats have chosen Milwaukee as the site of their 2020 election convention, in an effort to win back swing voters in the American "Rust Belt" who helped elect Donald Trump. In announcing the decision, the Democratic Party emphasized it is the first time a Midwestern city other than Chicago has been chosen to host a party convention in more than 100 years. (Photo by Kamil Krzaczynski / AFP) (Photo credit should read KAMIL KRZACZYNSKI/AFP/Getty Images)

The Democratic National Committee announced on Monday that its 2020 convention will be held in Milwaukee, a major city in the crucial swing state of Wisconsin.

Wisconsin's 10 electoral votes were narrowly won by Donald Trump in 2016 and helped secure his victory in the Electoral College, handing him the presidency. But with Democrats now in control of the governorship, the GOP's prospects of carrying the state in 2020 are dwindling.

Mark Jefferson, Executive Director of the Republican Party of Wisconsin blasted the city for having "a long history of socialism."

Ironic, considering Milwaukee hosted the Wisconsin Republican convention ahead of the midterms in 2018.

“No city in America has stronger ties to socialism than Milwaukee,” Jefferson said in a statement. “And with the rise of Bernie Sanders and the embrace of socialism by its newest leaders, the American left has come full circle. It’s only fitting the Democrats would come to Milwaukee.”

"The people of Wisconsin are far more practical than today's socialist-embracing Democratic Party gives them credit for," Jefferson said. "We'll get to reap the economic benefits of a convention, while they show the state up-close why this bunch should never be trusted to run the country."

Why the hostility, anyway?

@HenryJGomez You know what else would be problematic for the dairy state? Eliminating those socialist farm subsidies.
— Lauren (@Lauren) 1552326705.0

While it is true that Milwaukee's past does include an embrace of socialism, the term meant something far different a century ago than what Republicans assign to it today.

"The socialists of that time had a surprising amount in common with today’s Republicans," The Washington Post explains. "They supported low taxes and opposed public debt. They believed in a 'pay-as-you-go' form of governance and they had an entrepreneurial streak. They built public parks, public schools and a public water system, the last innovation earning them the nickname 'Sewer Socialists.'"

Good luck getting Republicans on board with sweeping social programs.

@HenryJGomez What a fucking joke. Republicans have NOTHING of substance anymore. Their only hope to stay alive as a… https://t.co/HvHk9gJY1B
— CagetheTrumpers (@CagetheTrumpers) 1552327810.0

“The socialists here were the ones carrying the flag of reform in reaction to the miscreants in office,” said John Gurda, a Milwaukee historian. “They had the same kind of energy as the capitalists."

In fact, the Post notes, Milwaukee's socialist mayors are ranked as the best in the city's history.

"Daniel Webster Hoan, elected in 1916, was the city’s second socialist mayor, presiding until 1940," Reis Thibault writes. "Historians, Gurda included, consider Hoan Milwaukee’s best leader. Time Magazine featured him on its cover and wrote that, during his administration, 'Milwaukee became one of the best-run cities in the U. S.'"

Gurda also emphasized the strategic importance of Wisconsin for Democrats in 2020.