Veteran Diplomat Just Explained How Putin and Kim Jong Un View Donald Trump's Negotiating Style, and It's Pretty Much Exactly What You Think 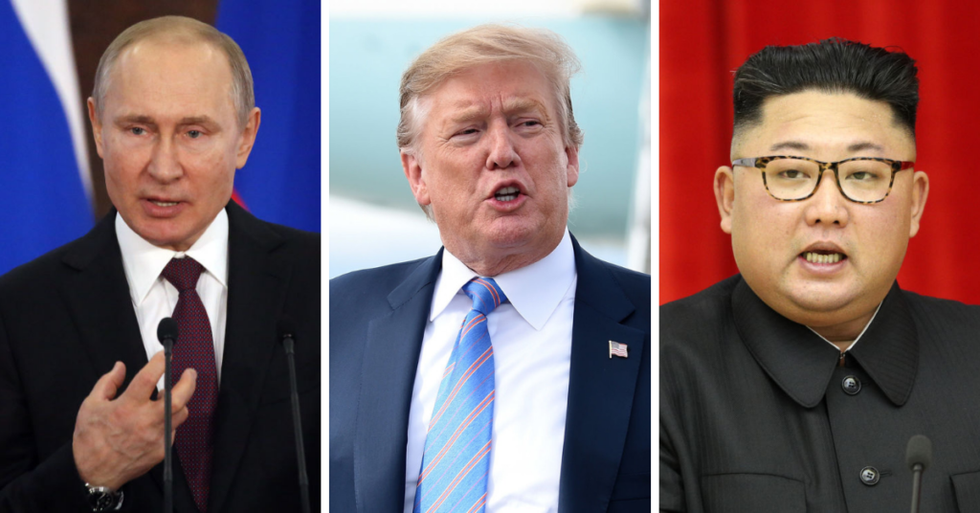 “In his effort to curry favor, to almost indulge and ingratiating himself with leaders like that, that’s perceived by [Vladimir] Putin, Xi Jinping, Kim Jong Un, as a sign of weakness and manipulability,” Burns said during an appearance on the BBC’s HARDtalk program.

Burns further noted that Trump's approach, as well as his failure to fill hundreds of vacancies within the State Department, has undermined American foreign policy worldwide.

“A focus on personal relationships is important, but it has to be coupled with a hard-nosed business of diplomacy; building leverage and trusting professional diplomats and others to carry through policies,” Burns explained. “Without that, diplomacy becomes narcissism.”

Burns is far from the only one to make similar observations.

@TrueFactsStated Trump refers to asylum seekers as amimals. But Putin is not. Kim Jong-un is not. How is this possi… https://t.co/uTzDUKZORe
— Makenna (@Makenna) 1554551882.0

“Let’s end these love affairs with dictators and strongmen all over the world,” O’Rourke told his supporters at a rally in El Paso, Texas.

While his time is increasingly allotted to addressing legal imbroglios and dealing with staffing changes, there's a growing perception that the President's foreign policy is defined by a set of double standards towards despotic rulers. Whether this is because he's distracted and unable to articulate a consistent approach or because some of these dictators know how to butter him up, the President's approach to nuclear weapons, humanitarian crises, and the legitimacy of world leaders is wildly inconsistent.

This haphazard approach not only allows some despots to get away with murder and build up their weapons of mass destruction, it also signals that it doesn't take much to get on Donald Trump's good side. Responsible national security policy should be driven by more than a feeling.

The president has failed to confront Putin over Russian interference in the 2016 presidential election and has come under fire for his often deferential attitude toward the Russian leader.

Trump, for example, shared a warm greeting with Putin in November 2018 at an event to mark 100 years since the armistice that ended World War I.

Trump was photographed beaming at Putin.

The admiration seemed to go both ways.

Video from the event shows that Putin greeted Merkel and Macron with handshakes, but that Trump received “a thumbs-up and a friendly pat, too,” according to former New York Times and NBC political analyst Anand Giridharadas‏.

That meeting was the first between the two men since a controversial face to face meeting in Helsinki over the summer.

Trump has at times referred to Kim Jong Un as a "friend."

He came under fire last year after he praised Kim, the leader of one of the world's most brutal totalitarian regimes, as a “smart guy” and a “great negotiator.”

“He’s a tough guy. Hey, when you take over a country, tough country, tough people, and you take it over from your father, I don’t care who you are, what you are, how much of an advantage you have, if you could do that at 27 years old, I mean, that’s one in 10,000 that could do that,” Trump told Fox News’ Bret Baier. “So he’s a very smart guy, he’s a great negotiator, but I think we understand each other.”

The president’s comments are particularly alarming when one considers Kim’s human rights record, which is widely considered the worst in the world. The North Korean representative’s human rights abuses are lengthy and include torturing, starving, and killing his own people and charges of indefinite detention.