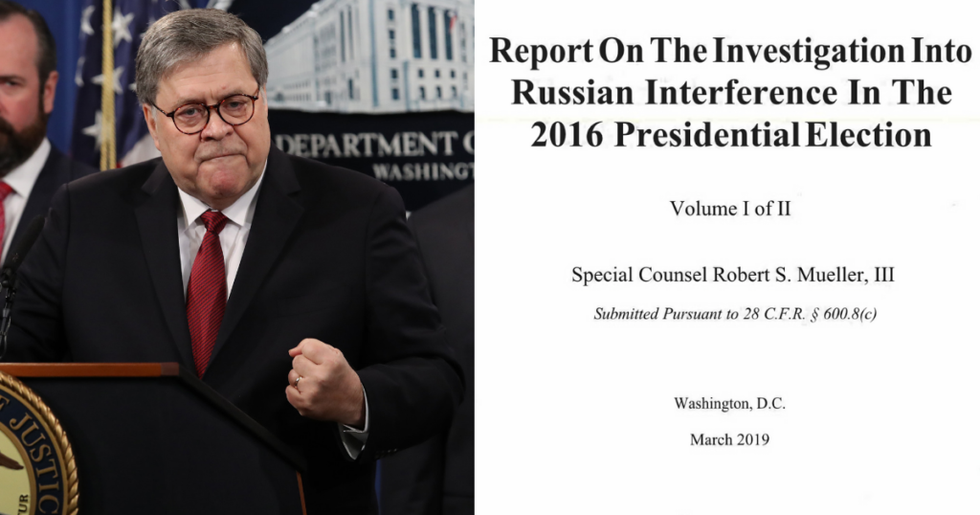 On March 24, 2019, Attorney General William Barr published a premature summary of Special Counsel Robert Mueller's report in which Barr claimed that Mueller found there was "no collusion" between President Donald Trump's campaign and Russia.

On Monday, conservative lawyer George Conway and CNN analyst Eli Honig predicted that Barr was hiding something based on how he summarized Mueller's findings.

Turns out that Conway and Honig were exactly right - to the letter.

We now know that Barr intentionally omitted the first - and most consequential section - of Mueller's conclusion on whether there was willful cooperation between the Trump campaign and Russian efforts to sway the election in Trump's favor:

"Although the investigation established that the Russian government perceived it would benefit from a Trump presidency and worked to secure that outcome, and the campaign expected it would benefit electorally from information stolen and released through Russian efforts, the investigation did not establish that members of the Trump Campaign conspired or coordinated with the Russian government in its election interference activities."

While it is true that Mueller concluded that there was no evidence of a coordinated effort, he did find that both parties expected to benefit from each other's actions.

These redacted sections are interesting for several reasons. First, Gates was being interviewed about Stone and T… https://t.co/tZD0stZJBe
— emptywheel (@emptywheel) 1555607716.0

Still, Barr tried to obfuscate the whole truth in order to protect the president.

@emptywheel The media does not consider lies of omission nearly as much as it should.
— Dave Kartunen (@Dave Kartunen) 1555606345.0

Nevertheless, the fact that the Trump campaign and Russia knew what was going on and exploited the opportunity is not sitting well with people.

Legal nuance has become public relations fodder for the administration, and frustration is mounting.

@emptywheel True I'm also wondering what all those Russia meetings at Donald's tower with his fam and minions was a… https://t.co/XsCH09OS2u
— Chef Kendra Nguyen (@Chef Kendra Nguyen) 1555607093.0

@emptywheel do you think that means they needed more evidence to connect those dots because the dots existed but no… https://t.co/pyX2xWpMIR
— Hester Prynne (@Hester Prynne) 1555609392.0

@emptywheel Yep. They were just disinterested bystanders. Like walking past a mugging. Of your mother.
— Steven Greenwald (@Steven Greenwald) 1555606525.0

@emptywheel So, since they did not meet in a back room, but rather conducted there efforts in broad daylight, consp… https://t.co/mBgTekJyWN
— SausageBoy (@SausageBoy) 1555609839.0

Barr also misled the American people regarding Mueller's conclusions pertaining to Trump's suspected obstruction of justice at a press conference he held prior to the release of his redacted version of the report.

“Although the Deputy Attorney General and I disagreed with some of the Special Counsel’s legal theories and felt that some of the episodes examined did not amount to obstruction as a matter of law, we did not rely solely on that in making our decision,” Barr said.

Barr added that Trump’s emotions in his attempts to obstruct justice did not amount to criminal intent. In other words, Trump was angry, but not corrupt.

“In assessing the President’s actions discussed in the report, it is important to bear in mind the context,” Barr said in his prepared remarks. “President Trump faced an unprecedented situation. As he entered into office, and sought to perform his responsibilities as President, federal agents and prosecutors were scrutinizing his conduct before and after taking office, and the conduct of some of his associates. At the same time, there was relentless speculation in the news media about the President’s personal culpability.”

Mueller's report, however, is far more damning than Barr let on.

Specifically, the special counsel’s report indicates that there were 10 instances of possible obstruction of justice by Trump, including efforts to have Mueller fired and pressuring former AG Jeff Sessions to unrecuse himself.

“We did not make a traditional prosecution decision,” the report says, “but the evidence we obtained supports several general statements about the president’s conduct.”

Mueller hinted that Trump did, in fact, attempt to obstruct justice.

"Our investigation found multiple acts by the President that were capable of exetting undue influence over law enforcement investigations, including the Russian-interference and obstruction investigations. The incidents were often carried out through one-on-one meetings in which the President sought to use his official power outside of usual channels. These actions ranged from efforts to remove the Special Counsel and to reverse the effect of the Attorney General's recusal; to the attempted use of official power to limit the scope of the investigation; to direct and indirect contacts with witnesses with the potential to influence their testimony. Viewing the acts collectively can help to illuminate their significance. For example, the President's direction to McGahn to have the Special Counsel removed was followed almost immediately by his direction to Lewandowski to tell the Attorney General to limit the scope of the Russia investigation to prospective election-interference only-a temporal connection that suggests that both acts were taken with a related purpose with respect to the investigation."

Though Mueller declined to formally accuse or indict Trump due to Justice Department procedure, he wrote that Congress has a duty ensure that no person, not even a sitting president, is above the law.

“We concluded that congress has authority to prohibit a president’s corrupt use of his authority in order to protect the integrity of the administration of justice," Mueller wrote of Trump's suspected obstructive behavior. “The Constitution does not categorically and permanently immunize a president for obstructing justice.”

Congress has a big decision to make.

“The conclusion that congress may apply the obstruction laws to the president’s corrupt exercise of the powers of the office accords with our constitutional system of checks and balances and the principle that no person is above the law.”