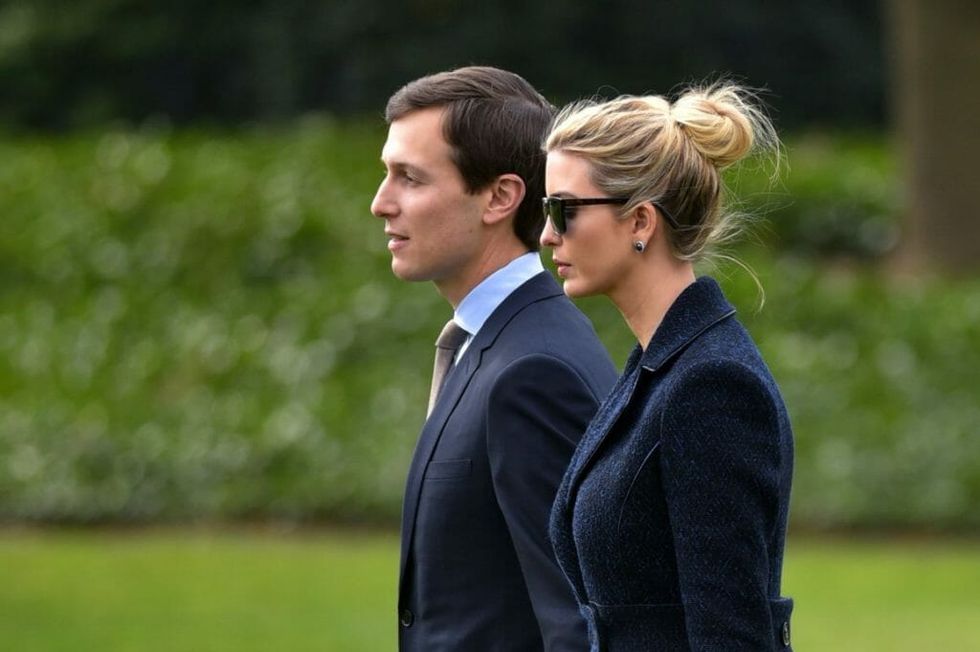 Senior Advisor to the President, Jared Kushner (L), walks with his wife Ivanka Trump to board Marine One at the White House in Washington, DC, on March 3, 2017. The two are travelling with US President Donald Trump to Florida. / AFP PHOTO / MANDEL NGAN (Photo credit should read MANDEL NGAN/AFP/Getty Images)

According to a new report, at least six of Donald Trump's closest White House advisors, including Jared Kushner, Ivanka Trump, Stephen Bannon, Reince Priebus, and Stephen Miller, used private email accounts to send and receive messages regarding government business. They did so despite Trump running a campaign based on attacking Hillary Clinton for her use of a private email account as Secretary of State.

“We must not let her take her criminal scheme into the Oval Office,” said Trump last year during the campaign. At his rallies, he would lead the crowds in the chant, “Lock her up!”

The hypocrisy is not lost on political commentators:

Kushner's lawyer, Abbe Lowell, released a statement that acknowledges Kushner used his personal email account for government business at least a hundred times between January and August of this year.

White House press secretary Sarah Huckabee Sanders responded to questions about the emails on Monday: “All White House personnel have been instructed to use official email to conduct all government related work [...] They are further instructed that if they receive work-related communication on personal accounts, they should be forwarded to official email accounts.”

According to CBS News and other reports, the majority of the known communications were initiated by those outside the administration seeking to set up meetings with senior White House staff. While government emails are expected to be public so as to allow oversight, it is not illegal to have private email accounts so long as they forward those emails for preservation.

Regardless of the forwarding policy, these discovered private accounts pose security risks, according to James Norton,  former senior homeland security official during the George W. Bush administration.“These private email accounts become targets of phishing attacks or other types of ways of collecting information,” he said. “It’s an issue not only for the person who owns that account, but the person who is receiving the emails. It is introducing risk into the system.”

Richard W. Painter, former White House ethics lawyer under President Bush and now vice chairman of watchdog group Citizens for Responsibility and Ethics in Washington, chimed in: “I think Kushner was sloppy to do this. I think Hillary was sloppy. I don’t think any of it was criminal.”

Hillary Clinton responded to the news on Monday, saying Trump knew there was nothing to his attacks regarding her emails a year ago, and gave some harsh criticism for the "rank hypocrisy" that Trump engages in both then and now.

“The hypocrisy of this administration, who knew there was no real scandal, who knew that there was no basis for all their hyperventilating. Republican members of Congress who politicized the deaths in Benghazi,” Clinton said. “No, we’re finding with the latest revelations ― they didn’t mean any of it. It’s just the height of hypocrisy.”

“It is something that if they were sincere about I think you’d have Republican members of Congress calling for an investigation,” she continued. “I haven’t heard that yet.”