The White House Announced that ISIS Territory in Syria was 100 Percent Eliminated, but Reporters on the Ground are Saying Something Different 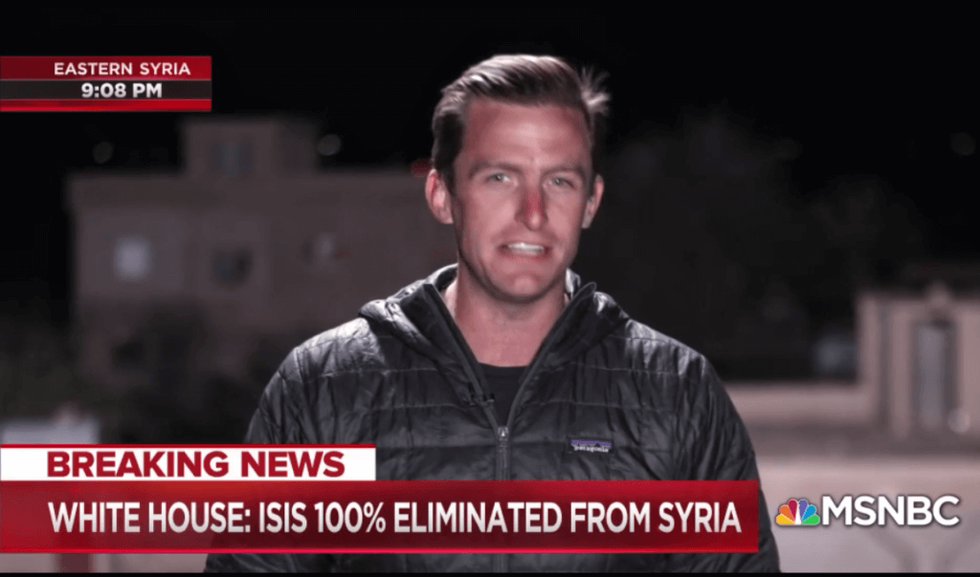 Just two days ago President Donald Trump claimed the final battle with ISIL (ISIS) forces in Syria would end by Wednesday night. But on Friday people near the battle reported fighting continues.

In his usual dramatic fashion, Trump held up maps on Wednesday. And Friday the White House announced the 100% elimination of ISIS in Syria.

The message came via Sarah Huckabee Sanders on Air Force One.

But the announcement came as a surprise to those in Syria like MSNBC field reporter Matt Bradley.

As WH declares ISIS caliphate defeated, our @bencnn is on the ground in Eastern Syria for @CNN, reporting on heavy fire with ISIS fighters.
— Jim Acosta (@Jim Acosta) 1553275829.0

The foreign correspondents detailed ongoing hostilities in the area of Eastern Syria.

People were critical of the premature announcement by the White House.

The White House: ISIS is defeated This guy: I cant wait for ISIS to be defeated so I can get the fuck out of here… https://t.co/Rk0wXW1qah
— Adam Parkhomenko (@Adam Parkhomenko) 1553276310.0

@Acosta @bencnn @CNN How dare you question the legitimacy of this report by the administration! I suppose you also… https://t.co/Xfa9I08ifv
— puppymonkeybaby (@puppymonkeybaby) 1553276654.0

And some saw the announcement before an actual victory as harmful.

People feared it would be used as motivation for remaining forces in Syria.

Meanwhile the President quoted Fox News as the only major domestic or foreign news organization that backed his story.

The President then offered a warning.

ISIS uses the internet better than almost anyone, but for all of those susceptible to ISIS propaganda, they are now… https://t.co/LiltrDNreJ
— Donald J. Trump (@Donald J. Trump) 1553271304.0

But even that message received considerable pushback.

@realDonaldTrump Trump uses the internet better than almost anyone, but for all of those susceptible to Trump propa… https://t.co/0rGzNOr9hW
— aleem (@aleem) 1553271398.0

With continued fighting confirmed, the status of ISIS in Syria remains undetermined.