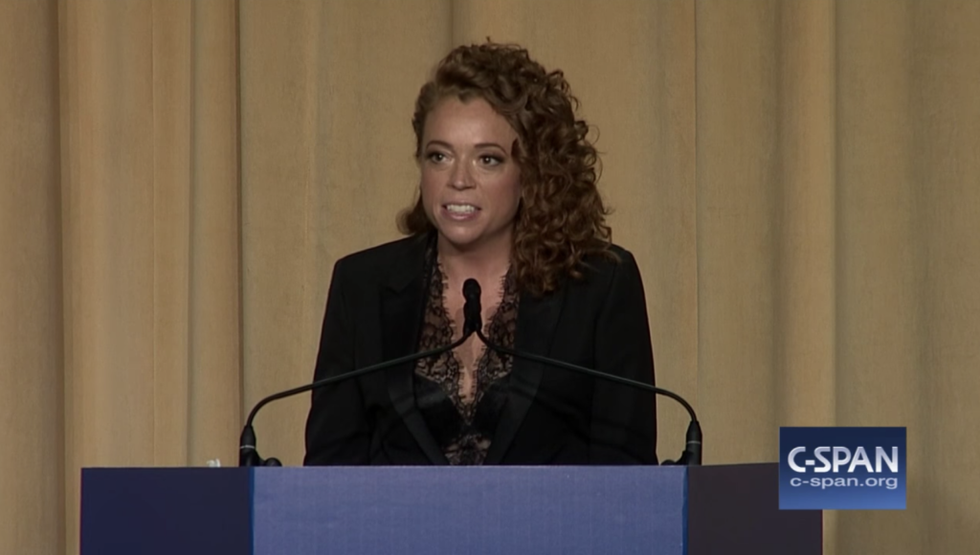 “Last night’s program was meant to offer a unifying message about our common commitment to a vigorous and free press while honoring civility, great reporting, and scholarship winners, not to divide people,” WHCA President Margaret Talev said in the statement. “Unfortunately, the entertainer’s monologue was not in the spirit of that mission."

The annual dinner is a celebration of both journalism and freedom of speech, and keynote speakers often make jabs at sitting presidents and their administrations.

Wolf was no exception, however, her performance on Saturday has drawn backlash, with many claiming she went too far.

Wolf's bit at the dinner included direct hits at President Donald Trump (who skipped the event, again), his family, and, perhaps most controversially, White House Press Secretary Sarah Huckabee Sanders, whom Wolf compared to a character in The Handmaid's Tale and described as a "resourceful" liar.

"We are graced with Sarah’s presence tonight. I have to say, I’m a little star-struck. I love you as Aunt Lydia on The Handmaid’s Tale,” Wolf said of Sanders. “I actually really like Sarah. I think she’s really resourceful. She burns facts, and then she uses that ash to create a perfect smokey eye.”

Maggie Haberman of The New York Times took issue with the "eye" remarks, tweeting that Sanders "sat and absorbed intense criticism of her physical appearance, her job performance, and so forth, instead of walking out, on national television, was impressive."

That @PressSec sat and absorbed intense criticism of her physical appearance, her job performance, and so forth, in… https://t.co/i3HQ7Vshsl
— Maggie Haberman (@Maggie Haberman) 1524971647.0

Wolf defended her remarks, tweeting back, "All these jokes were about her despicable behavior. Sounds like you have some thoughts about her looks though?"

Hey mags! All these jokes were about her despicable behavior. Sounds like you have some thoughts about her looks th… https://t.co/0NE4NHPfUD
— Michelle Wolf (@Michelle Wolf) 1524984704.0

Comedian Kathy Griffin came to Wolf's defense over the dinner, which has typically been used as an opportunity to roast members of the press and government officials.

“Stop acting like @michelleisawolf showed up at the playground and started making fun of Sarah Sanders in front of her children,” Griffin added. “Sarah was there representing Trump, on the dais, at an event with a professional comic who was hired to do a roast.”

Others on Twitter also noted the scent of hypocrisy in criticism of Wolf, considering Trump's history of disparaging and mocking people with whom he doesn't agree.

"Shame on you! You are the very ones who are supposed to defend the 1st Amendment! A comedian YOU INVITED AND HIRED does what she was supposed to do and you cower? You're also supposed to be literate, but can't understand no attacks were made on anyone's looks?"

Trump's prickly relationship with the media didn't go unnoticed, either.

Neither did the press's obsession with Trump, which Wolf joked about at the dinner.