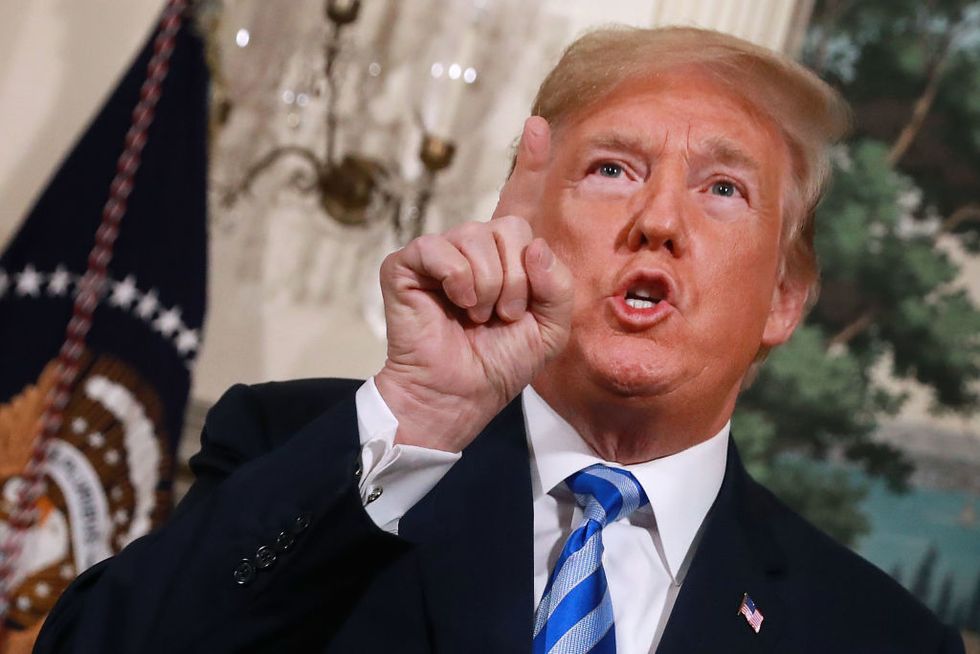 WASHINGTON, DC - MAY 08: U.S. President Donald Trump announces his decision to withdraw the United States from the 2015 Iran nuclear deal in the Diplomatic Room at the White House May 8, 2018 in Washington, DC. (Photo by Chip Somodevilla/Getty Images)

President Donald Trump once again assailed the news media, accusing members of the press of "working overtime" to propagate so-called "fake news" about him and his administration, and threatened to take away press credentials.

"The Fake News is working overtime. Just reported that, despite the tremendous success we are having with the economy & all things else, 91% of the Network News about me is negative (Fake)," the president wrote on Twitter. "

Why do we work so hard in working with the media when it is corrupt? Take away credentials?"

The Fake News is working overtime. Just reported that, despite the tremendous success we are having with the econom… https://t.co/loypJ75j0b
— Donald J. Trump (@Donald J. Trump) 1525865925.0

The tweet prompted a response from Margaret Talev, the president of the White House Correspondents' Association, which represents the White House press corps in its dealings with the Trump administration:

Some may excuse the president's inflammatory rhetoric about the media, but just because the president does not like news coverage does not make it fake. A free press must be able to report on the good, the bad, the momentous and the mundane, without fear or favor. And a president preventing a free and independent press from covering the workings of our republic would be an unconscionable assault on the First Amendment.

The WHCA had this morning been criticized by Eric Boehlert, a writer at Sharebluewho'd previously worked for Salon and Rolling Stone.

"What a joke that 'journalism' organization has become," Boehlert tweeted.

The president often criticizes major news outlets for their coverage of him and his administration but has curried favor with the likes of Sean Hannity, Alex Jones and his Infowars website, and The Gateway Pundit, all of which have been known to spread conspiracy theories. (The president even granted Gateway Pundit press credentials, allowing reporters with the outlet to attend White House press briefings.)

However, revoking press credentials does not mean media outlets can't cover the president, and several political figures and news reporters soon condemned the president's statements, calling him out for his continued hostility.

"These authoritarian impulses of yours are anti-American," Walter Shaub, the former Director of the United States Office of Government Ethics, tweeted in response.

"He has a lack of understanding of how news coverage actually works, and unfortunately so do a lot of his supporters," Maggie Haberman of The New York Times. Haberman was part of a team that earlier this year won a Pulitzer Prize for reporting on the president's advisers and their connections to Russia.

Others also weighed in.

"That's his definition of fake news — anything that he doesn't like. That's actually not the definition of fake!" CNN's Jake Tapper, whom the administration has often singled out for his tenacity during press briefings, during an appearance on The View.

Chris Cillizza, whose often scathing minute-by-minute editorials and examinations on the president's actions have contributed to the president's disdain for CNN, observed: "Any time President Trump says 'fake news' sub in the words 'bad for me.' That's what he really means anyway."

The president's outburst comes just a day after The Washington Post and other news outlets confirmed that Michael Cohen, his personal lawyer and fixer, received $500,000 from New York investment firm Columbus Nova, which retained Cohen as a consultant “regarding potential sources of capital and potential investments in real estate and other ventures.” The firm is the affiliate of the Renova Group, founded by Viktor Vekselberg, a Russian business magnate.

The Washington Post's confirmation lends further credibility to Clifford's claims that Cohen and the president attempted to silence her, an account over which the president, most recently through his personal lawyer, Rudy Giuliani, has only continued to contradict himself.