Kanye West Followed Up His Oval Office Meeting With a Bizarre 'Keynote' Address on Top of a Table in an Apple Store, and Hoo Boy 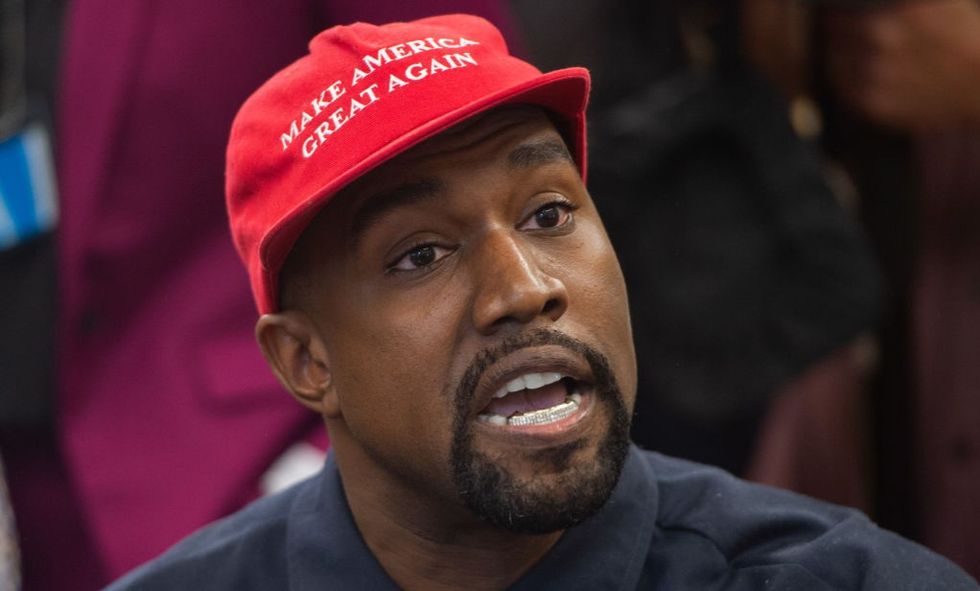 Rapper Kanye West speaks during his meeting with US President Donald Trump in the Oval Office of the White House in Washington, DC, on October 11, 2018. (Photo by SAUL LOEB/AFP/Getty Images)

In August of 2018, artist and designer Kanye West made several public appearances where he acknowledged his diagnosis with bipolar disorder. But in a rambling, seemingly manic appearance with President Donald Trump in the Oval Office at the White House on Thursday, West walked back his earlier statements claiming he was "misdiagnosed" and only "sleep deprived."

People with firsthand experience with the mental illness are inclined to believe his earlier statement.

Especially after where West went—and what West did—when he was done at the White House.

In an Apple Store in Washington DC, West climbed onto a table to give an impromptu and uninvited speech. Patrons of the store witnessing the "keynote" address were left baffled.

The clothing and footwear designer drew attention to his revised MAGA hat that he remade to say just "MAG" or "Make America Great." West stated from his tabletop stage:

"It hurts us as people, specifically black people, the idea [of MAGA], because we say, was America ever great for us? So we made an updated hat that said, 'Make America Great', and Trump wore the hat so he is open to adjusting and listening."

Several people captured the moment and shared it on Twitter. Being DC, reporters for CNN and Religion News Service lucked into the situation.

Caroline Kelly, breaking news reporter for CNN was among the confused crowd wondering why West decided to give a presentation in an Apple Store.

Kelly captured part of West's speech on her phone.

Jack Jenkins, a reporter for Religion News Service, also got to see the "keynote" address, as West referred his speech.

He captured the speech as well.

To clarify my typo-ridden tweet: He’s announcing he made a hat for Trump that says “‘make America great’ without th… https://t.co/JAbRGaOnDv
— Jack Jenkins (@Jack Jenkins) 1539291754.0

Apple Store employees wouldn’t comment on why Kanye was there, except one under his breath. Me: “Why was Kanye her… https://t.co/DTXTGNPEUx
— Jack Jenkins (@Jack Jenkins) 1539292379.0

People were concerned for West's mental state after his visit to the Oval Office and accused Trump of exploiting a person experiencing a manic episode.

West's Apple Store appearance did not allay any fears for his health.

@jackmjenkins What a spectacle. He’s spiraling. Where are the people that truly love and care about this person? Wh… https://t.co/d5afKGILYY
— teetads (@teetads) 1539292555.0

Although one person asked an important question regarding West's choice to go to an Apple Store.

@caroline_mkelly this tweet is gonna go viral so allow me to use the space underneath for an important public safet… https://t.co/XuTdccJnUg
— Eric Geller (@Eric Geller) 1539290972.0