Isis Fighter Just Released a Video Calling for Attacks on U.S. Soil and His Advice for American Militants Is Chilling 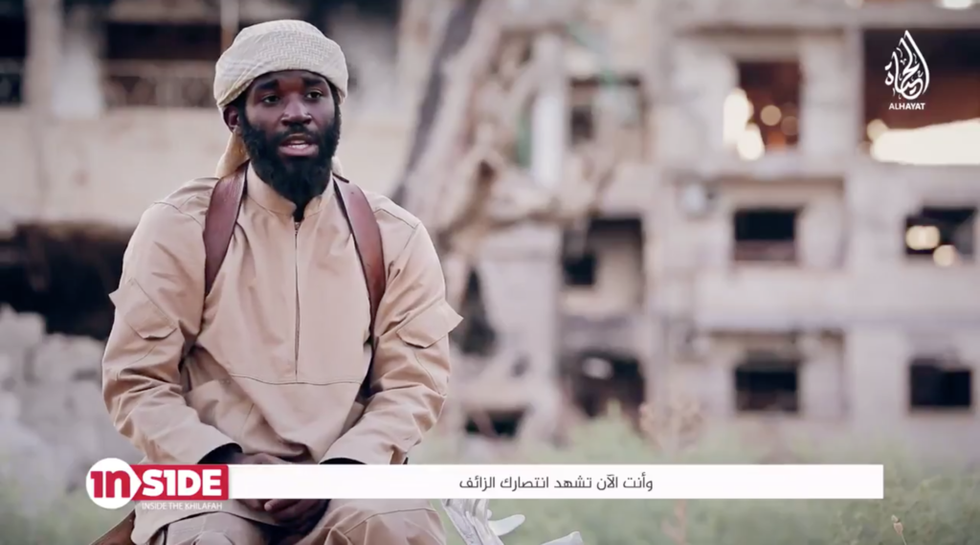 ISIS Militant Abu-Salih a-Amriki appeared in a new propaganda video on Wednesday, sponsored by the Islamic State militant group (ISIS), telling Jihadis living in the United States to use the country's lenient gun laws to carry out mass shootings on American soil.

The supposedly bearded American Isis fighter, identified in the video as "Abu Salih al-Amriki," spoke in what sounded like a New York City-area accent and is shown to only have one leg. He wore military khaki fatigues and a prosthetic leg. He used crutches to walk through bombing ruins in the video.

“Take advantage of the fact that you can easily obtain a rifle or a pistol in America,” the fighter says. “Spray the kuffar [infidels] with bullets so that their fear of the Muslims rises and they continue to reveal their hatred towards Islam.”

Abu-Salih called upon his fellow disabled fighters to take up arms against the United States: "Brothers with limbs or no limbs, I challenge you to a race towards gates of Jannah [paradise]."

He also directed his attention to President Donald Trump, calling him a "dog of Rome" and accusing him of entering "into the White House on the back of your crusader rhetoric, which the fake media has pressured you to tone down."

He continued to say in the video that Trump's war on Islam has made the United States more vulnerable to terror attacks, and this will help fuel support for ISIS globally.

"Your feelings and hatred towards Islam has already been revealed… you are now witnessing your fake victory. Your war against Islam has only made your homeland more vulnerable and your society is cracking into chaos."

The Department of Homeland Security said it was "aware" of threats to American nationals online. The FBI has yet to comment on the video.

Both Homeland Security and domestic law enforcement have long feared that terrorists could abuse the Second Amendment to easily acquire powerful assault rifles and handguns.

"We find ourselves in a more dangerous situation because our population of violent extremists has no difficulty gaining access to weapons that are quite lethal," said Rasmussen, via The Washington Post. "I wish that weren't so."

Rasmussen criticized the Trump administration and its policies for creating a "mutual suspicion" with American Muslims living in the United States. Trump's rhetoric, also propagandistic, made counterterrorism efforts "more difficult" to be effective.

"If you're increasing the amount of suspicion and distress on these communities, it places more challenges in our way," Rasmussen told CNN.

The video is the latest in series produced and released by ISIS called "Inside the Caliphate."