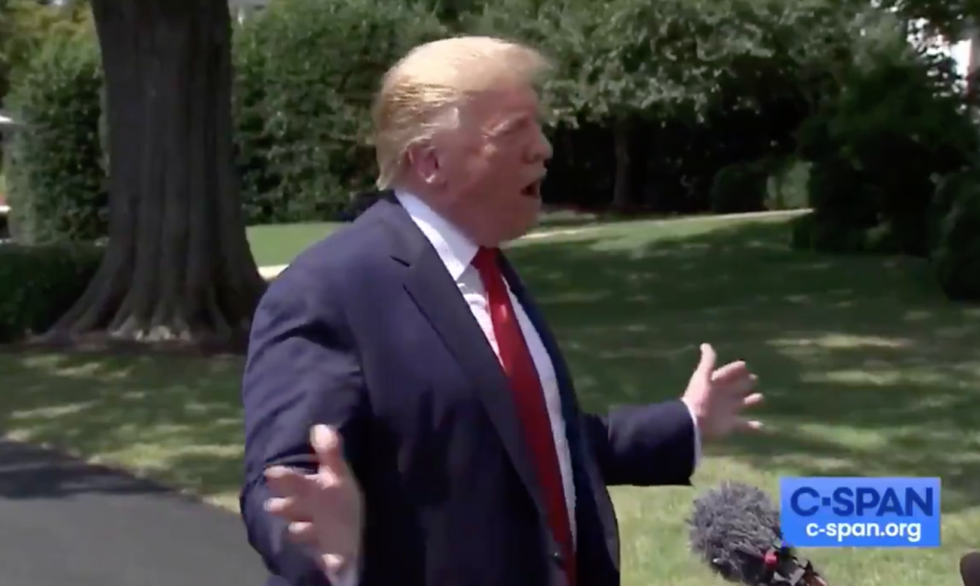 Hours after quoting praise that called him "the king of Israel" and likened him to the "second coming of God," President Donald Trump sanctified himself in front of reporters on the White House Lawn before departing to speak to AmVets National Convention attendees in Louisville, Kentucky.

Trump was discussing the deficit-swelling trade war he began with China, insisting that it should have been instigated by the three presidents before him. He then asserted that he was "the one to do it," before looking to the sky and saying

The president's allies have dismissed the proclamation, assuring that the president was only joking. However, others believe that the statement should be concerning in the context of Trump's and his supporters' history of messianic rhetoric glorifying the president.

Political analyst Jared Yates Sexton elaborated on the harm an escalation of this rhetoric could bring.

It may sound too extreme to be true, but evangelical Trump supporters are already defending the president by decrying Democrats as agents of Lucifer.

Real Americans love you President Trump and always will. Thank you sir for taking the arrows but we have a few for… https://t.co/mL8ICzxxKz
— Nancy cox (@Nancy cox) 1564004897.0

@ChrisJZullo @realDonaldTrump Demon rats are a satanic hate group, lovers of themselves False accusers full of en… https://t.co/z9zd6QhfQG
— The Surfer (@The Surfer) 1541457481.0

Though his supporters insist he was joking with his "chosen one" comment, the level of religious adoration for Trump is still alarming.

White Evangelicals remain one of Trump's most supportive demographics.