Donald Trump Just Announced the June 12th Summit With North Korea Is Back On, But Doesn't Want Us to Expect Anything to Come Out of It 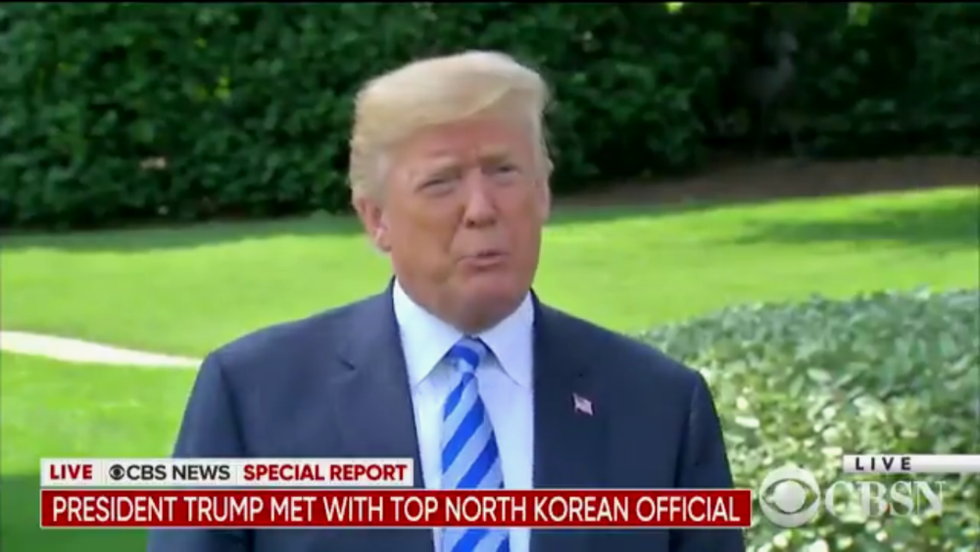 Get your challenge coins ready. After notifying Kim Jong Un by letter last month that the planned summit between North Korea and the United States was cancelled, it appears President Donald Trump will be once again headed for Singapore.

"You people are going to have to travel," Trump told reporters gathered outside the White House Friday, "because you'll be in Singapore June 12th."

But when asked about expectations for a major deal being reached during the talks, Trump said, "I don't see that happening. I told him I think you could have probably [other meetings]."

Throughout the briefing the president referred to the talks as a process that he thought would be ultimately successful, but was unwilling to commit to a set timetable or specific goals.

After stating the same several times, that it was a process, Trump finally said, "Remember what I say: we will see what we will see."

The revived summit comes from the efforts of Secretary of State Mike Pompeo and the reported second most powerful man in North Korea, Kim Yong Chol. The two met in Washington, DC and Friday's announcement is said to be the result of a final two hour meeting in the Oval Office.

When he first stepped forward to address the press, Trump remarked "Mike has spent two days... doing this. We've gotten to know their people very well."

Trump stated Japan and South Korea were also very involved and good things were happening with China. But the president pointed out that nothing would have happened without the United States.

The tone and message of the briefing was markedly different from announcements made before the summit was cancelled on May 24. Prior briefings were full of absolutes and promised outcomes.

This time, Trump is playing his cards much closer to the vest and making no promises, only cautiously optimistic statements.

Hopefully all members of the Trump administration will follow the president's lead on their pre-summit rhetoric.

Of course the big question remains focused on North Korea's nuclear capabilities. When asked about denuclearization, Trump made none of the boasts of before.

For Kim Jong Un and North Korea, the big payoff of the summit is an end to some or all economic sanctions.

As news of the on again summit spread, Twitter reactions were as mixed as they were before the cancellation. Some praised Trump while others saw the summit as a political ploy or doomed to failure.

No talk of human rights, no commitment from NK to denuclearization. But a willingness to meet. The domestic politic… https://t.co/Xtf8YuMEhs
— Robert Costa (@Robert Costa) 1527883456.0

Talking is never a bad thing, as much as neocon hawks like John Bolton may say otherwise. We must support those in… https://t.co/RpL06FnqCt
— VoteVets (@VoteVets) 1527879876.0

It is indeed head exploding that many of America's longtime democratic allies are in crisis mode w/US on the same… https://t.co/XMs2ytSCAU
— Aaron David Miller (@Aaron David Miller) 1527880735.0

The North Koreans have successfully "educated" Trump that John Bolton's conception of how the June 12 Summit was su… https://t.co/TXJCRbAjWN
— Brian Becker (@Brian Becker) 1527882172.0

And what about that just delivered letter from Kim Jong Un received today?

After announcing summit is back on, Trump just said he hasn't looked at the letter from Kim Jong Un delivered today… https://t.co/m0eayxguts
— Jim Acosta (@Jim Acosta) 1527879160.0