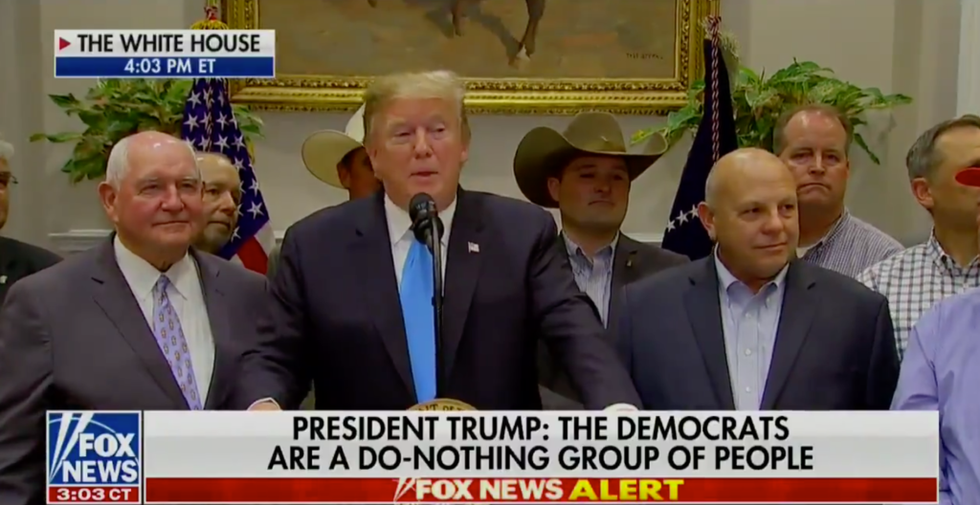 After a disastrous meeting with House Speaker Nancy Pelosi (D-CA) and other congressional Democrats, in which President Donald Trump reportedly stormed out of a meeting on infrastructure, Trump stopped a presser to make his staff confirm his demeanor.

The exchange occurred while Trump addressed federal aid for farmers burdened by his tariffs against China.

Trump seeks assurances from his staff that he's not a lunatic. Completely beyond parody. https://t.co/DBwT8ayvgF
— Aaron Rupar (@Aaron Rupar) 1558644552.0

"Mercedes is right. Kellyanne is right. You were calm," Kudlow confirmed.

Sanders, who entered the press conference later, was blindsided by Trump as she walked in.

"Does anyone know Sarah Huckabee Sanders?" Trump asked the room to laughter while flanked by several U.S. farmers. "Sarah, we're just talking about the meeting yesterday ... the narrative is I was screaming and ranting and raving ... just out of curiosity, you were there, what was my tone at the meeting?"

"Very calm, I’ve seen both and this was definitely not angry or ranting," the press secretary confirmed.