Silence can be deafening. 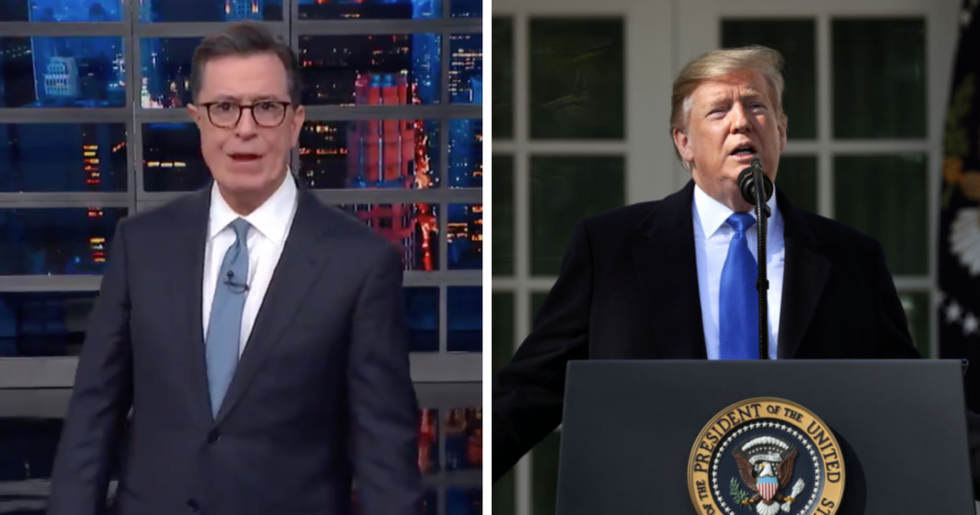 The arrest of Christopher Paul Hasson, a Coast Guard lieutenant and white supremacist who was recently arrested on gun and drug charges, has unnerved many because he allegedly wanted to plan a mass killing and had compiled a hit list of prominent Democratic politicians, including Senators Chuck Schumer (NY) and Kamala Harris (CA). But President Donald Trump, usually so quick to fire off a tweet, has not said a word about Hasson, a fact that did not escape Late Show host Stephen Colbert.

Hasson "is a homicidal, racist monster serving in our military,” Colbert said. “But don’t worry, the commander-in-chief slapped him down with a savage tweet of… nothing.”

“Silence. Hasn’t commented,” he added. “It makes sense. Hasson only wants to kill everyone on Earth. It’s not like he’s hosting SNL.”

Trump, by contrast, was quick to comment on the arrest of Jussie Smollett, the Empire actor who has been arrested and charged after he falsely asserted he was the victim of a violent and homophobic attack by Trump supporters in Chicago last month. Yesterday, Trump addressed Smollett directly, saying he must answer for “MAGA and the tens of millions of people you insulted with your racist and dangerous comments."

.@JussieSmollett - what about MAGA and the tens of millions of people you insulted with your racist and dangerous comments!? #MAGA
— Donald J. Trump (@Donald J. Trump) 1550765397.0

@thedailybeast @SorrellBarb It’s sad that it takes a talk show host to recognize the gravity of this story that new… https://t.co/utsQj18NLM
— AmosMom (@AmosMom) 1550841772.0

Colbert did, as always, find time to inject a rather serious observation with some humor.

Of Hasson, he said: “Who says men don’t like Marie Kondo? This grenade sparks joy in me. It also sparks a fire, because it is an incendiary grenade.” After mentioning that Hasson had reportedly been a white supremacist for the last 30 years, he commented: “He is close to skinhead retirement. Soon he can cash in his 401KKK.”

The president has still not commented on Hasson's arrest. Since his tweet to Smollett, he has endorsed Senator John Cornyn...

We are here to honor the extraordinary contributions of African-Americans to every aspect of American Life, History… https://t.co/51s1YX9Oq8
— Donald J. Trump (@Donald J. Trump) 1550795227.0

...insisted that he did not collude with the Russian government...

...and denigrated Adam Schiff, the head of the House Intelligence Committee.

Court documents allege Hasson took inspiration for his planned killings from Anders Breivik, the Norwegian terrorist who was convicted in 2011 for two terror attacks that killed 77 people.

"The defendant is a domestic terrorist, bent on committing acts dangerous to human life that are intended to affect governmental conduct," prosecutors wrote in a court filing that included an alleged email from Hasson in which he wrote: "I am dreaming of a way to kill almost every last person on the earth."

Yesterday, MSNBC host Joe Scarborough said Trump's rhetoric is responsible for the spate of plots against journalists and political figures.

"This is pretty simple," he added. "It’s all on the president’s shoulders. It’s all the president’s fault, and he sits there with his mouth shut, for once in his life, doesn’t say anything, doesn’t tweet anything, which, of course, makes it even more on him.”