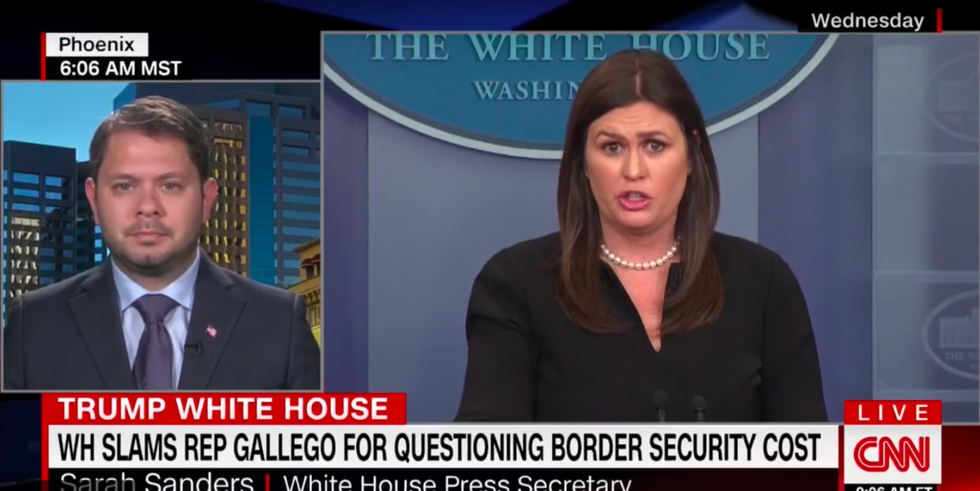 Representative Ruben Gallego (D-AZ) had harsh words for White House Press Secretary Sarah Huckabee Sanders after she called on him to "work" with President Donald Trump on matters related to border security and the wall he wishes to construct along the nation's southern border.

It all began when Gallego called the president's initiative "expensive" on social media.

Using the National Guard to do border security is very expensive. For what it would cost the Guard to make just TWO… https://t.co/0qzU75PtEF
— Ruben Gallego (@Ruben Gallego) 1522786918.0

Gallego's statements prompted Sanders to lash out, and she accused Gallego and other lawmakers for not addressing the issue at the legislative level.

"If that congressman’s so concerned, maybe he ought to show up and actually support legislation that would fix these problems instead of blaming the president that’s actually doing something about it,” Sanders told reporters at yesterday's press briefing.

Sanders concludes briefing by declining to detail what Trump and Pruitt spoke about on phone the other night, then… https://t.co/UfzJZxJExv
— Aaron Rupar (@Aaron Rupar) 1522871936.0

When asked to respond to Sanders’ statement during an appearance on CNN, Gallego was quick to denounce her suggestion as well as the president's proposals.

“I’ll gladly work with the president when his ideas aren’t stupid and detrimental to the United States,” he said. “Unfortunately, this is what this plan is. It was not planned out. It’s using our National Guard troops, who are greatly trained. You’re going to pull them out of their private lives to essentially go and solve a political problem.”

Gallego further criticized Trump's plan to deploy troops to the border, saying that the plan is merely a ploy to further placate the president's most fervent supporters.

“This is a failing presidency,” he said. “Their ideas are failing. Now they’re throwing red meat at the base by essentially sending troops to the border… This is what happens when you have a failing president and a bad administration.”

Gallego also rebuked Sanders on social media, telling her that he's in Congress to act as a "check" to some of the president's "worst plans."

Ask a Marine like my friend @RubenGallego a question, expect a no BS answer like this one. https://t.co/xMGZvmciaT
— Jason Kander (@Jason Kander) 1522957078.0

Congressman @RubenGallego: “I will gladly work with the president when his ideas aren’t stupid and detrimental to t… https://t.co/r36IvJGCTs
— Russell Drew (@Russell Drew) 1522952985.0

Rep. Ruben Gallego (D) said Thursday he would be willing to work with Trump on border security measures "when his i… https://t.co/P5dSK9KizC
— bennydiego✯ (@bennydiego✯) 1522939329.0

The news of Gallego's feud with Sanders comes on the heels of the decision by Mexico's Senate, in a unanimously approved nonbinding resolution, to “to suspend the bilateral cooperation with the United States of America on matters of migration and the fight against transnational organized crime as long as President Donald Trump does not conduct himself with the civility and the respect that the people of Mexico deserve.”

The president, meanwhile, has continued to sensationalize the story of a caravan of migrants that was disbanded at the border before they could enter the country. The president praised Mexican authorities for their role in the operation.

The Caravan is largely broken up thanks to the strong immigration laws of Mexico and their willingness to use them… https://t.co/AoaWPSxYdq
— Donald J. Trump (@Donald J. Trump) 1522928453.0