Rod Rosenstein Looked Very Uncomfortable Standing Behind William Barr During His Press Conference, and Everyone Is Making the Same Joke 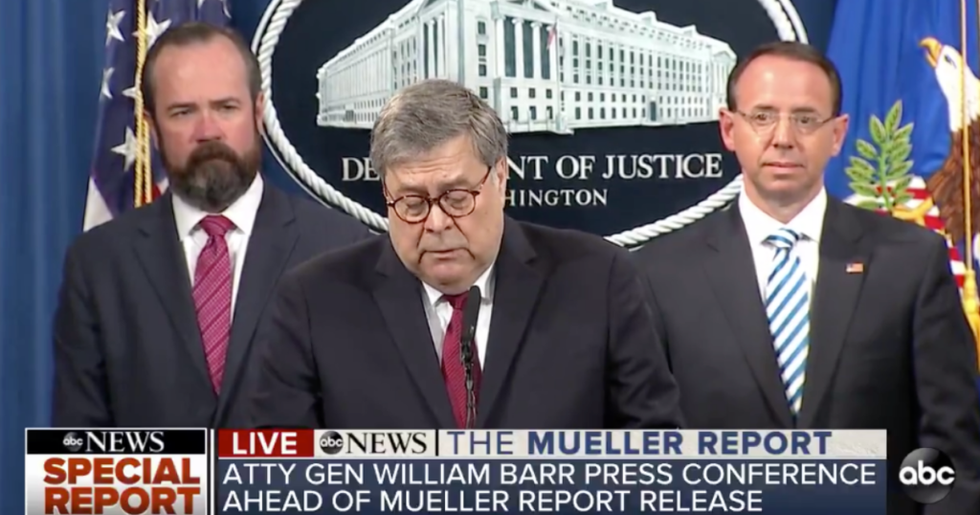 Attorney General William Barr held a bizarre press conference ahead of the release of the redacted version of Special Counsel Robert Mueller's report Thursday morning and people are making the same observation.

Deputy AG Rod Rosenstein - the man who appointed, served as a witness for, and oversaw Mueller's investigation - caught the attention of social media as he stared blankly into space while Barr tacitly cleared President Donald Trump of any wrongdoing.

Rod Rosenstein looks like someone in a hostage video. #ThursdayThoughts #MuellerThursday #TrumpColluded https://t.co/N1K68ZziS7
— The Daily Edge (@The Daily Edge) 1555594767.0

People have their theories as to what was going through Rosenstein's head.

Barr also drew the ire of politicos and legal experts for his interpretation of Mueller's findings.

Specifically, the special counsel's report indicated that there were 10 instances of possible obstruction of justice by Trump, including efforts to have Mueller fired and pressuring former AG Jeff Sessions to unrecuse himself.

"Although the Deputy Attorney General and I disagreed with some of the Special Counsel’s legal theories and felt that some of the episodes examined did not amount to obstruction as a matter of law, we did not rely solely on that in making our decision," Barr said.

Barr added that Trump's emotions in his attempts to obstruct justice did not amount to criminal intent. In other words, Trump was angry, but not corrupt.

"In assessing the President’s actions discussed in the report, it is important to bear in mind the context," Barr said in his prepared remarks. "President Trump faced an unprecedented situation. As he entered into office, and sought to perform his responsibilities as President, federal agents and prosecutors were scrutinizing his conduct before and after taking office, and the conduct of some of his associates. At the same time, there was relentless speculation in the news media about the President’s personal culpability."

This was an extraordinary split from traditional legal standards.

Barr claims a defense for Trump to obstruction is he "was frustrated & angered by a sincere belief" the probe under… https://t.co/y3rrQjMPt1
— Ari Melber (@Ari Melber) 1555596428.0

This is a total goatfuck. This isn’t a briefing. It’s a full-throated defense of Trump. Barr just admitted he dis… https://t.co/OtnJErU1Id
— Angry Staffer (@Angry Staffer) 1555595527.0

54/ Barr is providing *exactly* the full-throated obstruction defense of Trump that his lawyers would give. This is… https://t.co/vybbIJt9eC
— Seth Abramson (@Seth Abramson) 1555595160.0

Democrats in the House have demanded that Barr turn over Mueller's full, unreacted report by May 23.

“It is clear Congress and the American people must hear from Special Counsel Robert Mueller in person to better understand his findings. We are now requesting Mueller to appear before @HouseJudiciary as soon as possible,” House Judiciary Committee Chair Jerry Nadler (D-NY) tweeted Thursday.

“Attorney General Barr’s regrettably partisan handling of the Mueller report, including his slanted March 24th summary letter, his irresponsible testimony before Congress last week, and his indefensible plan to spin the report in a press conference later this morning — hours before he allows the public or Congress to see it — have resulted in a crisis of confidence in his independence and impartiality," Pelosi and Schumer wrote in a statement.

"We believe the only way to begin restoring public trust in the handling of the Special Counsel’s investigation is for Special Counsel Mueller himself to provide public testimony in the House and Senate as soon as possible."