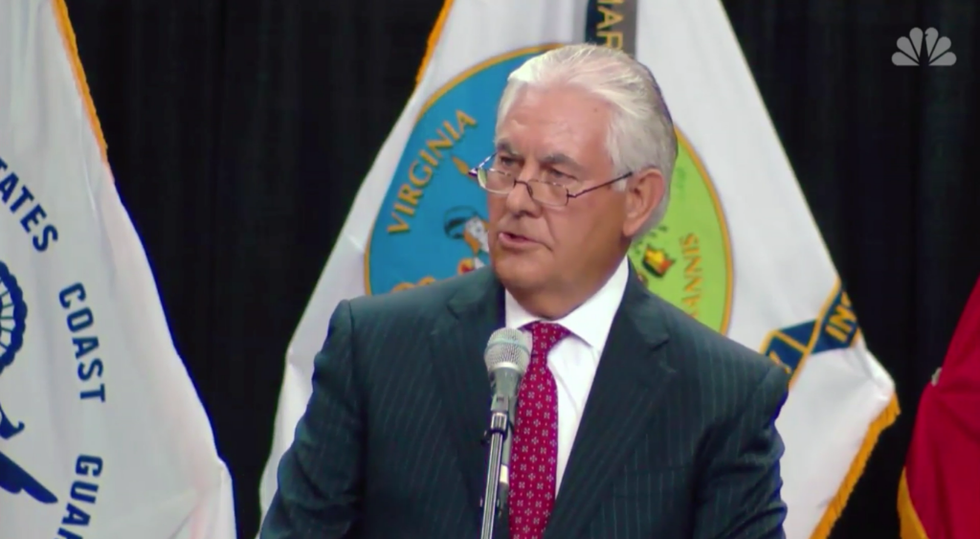 "As I reflect upon the state of our American democracy, I observe a growing crisis in ethics and integrity."

If our leaders seek to conceal the truth, or we as people become accepting of alternative realities that are no longer grounded in facts, then we as American citizens are on a pathway to relinquishing our freedom."

So stated former Secretary of State Rex Tillerson during his commencement address at Virginia Military Institute (VMI) on Wednesday. He further stated:

"A responsibility of every American citizen to each other is to preserve and protect our freedom by recognizing what truth is and is not, what a fact is and is not and begin by holding ourselves accountable to truthfulness and demand our pursuit of America's future be fact-based -- not based on wishful thinking, not hoped-for outcomes made in shallow promises, but with a clear-eyed view of the facts as they are, and guided by the truth that will set us free to seek solutions to our most daunting challenges."

The former oil industry executive served as head of the U.S. State Department under President Donald Trump from his confirmation on February 1, 2017 until fired by Trump on March 13, 2018. March 31 was his last day in office.

Tillerson never spoke of any American leaders in particular, but he did invoke the names of several countries his former boss speaks highly of: China and Russia.

"When we as people, a free people, go wobbly on the truth, even on what may see the most trivial of matters, we go wobbly on America," he continued.

Tillerson also warned of the death of American democracy.

If we do not as Americans confront the crisis of ethics and integrity in our society and among our leaders in both private and public sector, and regrettably at times even the nonprofit sector, then American democracy as we know it is entering its twilight years."

"An essential tenant of a free society, a free people, is access to the truth. A government structure and a societal understanding that freedom to seek the truth is the very essence of freedom itself. You shall know the truth and the truth shall make you free."

While never invoking the president's name in his speech, few think he was referring to anyone else. Trump's presidency remains mired in accusations of dishonesty. His own spokesperson, Kellyanne Conway, called the president's statements "alternate facts".

This isn't the first time Tillerson spoke on integrity or a lack thereof. In his brief remarks before leaving the State Department, he said:

Being fired gives you freedom to tell the truth about your boss. Ask Rex Tillerson. https://t.co/mYVW2cboHq
— Crooks and Liars (@Crooks and Liars) 1526500684.0

Shocked that I'm agreeing w/anything Tillerson says, but yes, absolutely yes. THIS is what #TheResistance has been… https://t.co/YTFKWXnQlt
— Adrienne Kirschner (@Adrienne Kirschner) 1526494565.0

In a commencement address, Rex Tillerson said that truth is important. Pundits, including pro-Trump ones, are inter… https://t.co/qim01BoDes
— Jay Nordlinger (@Jay Nordlinger) 1526489293.0

But some in the press corps who covered the State Department during his tenure are calling out Tillerson's own integrity.

Fired SecState Rex Tillerson calls for a "fierce defense of the truth and a common set of facts." (However this is… https://t.co/Zed0Zu0F9G
— Michelle Kosinski (@Michelle Kosinski) 1526488691.0