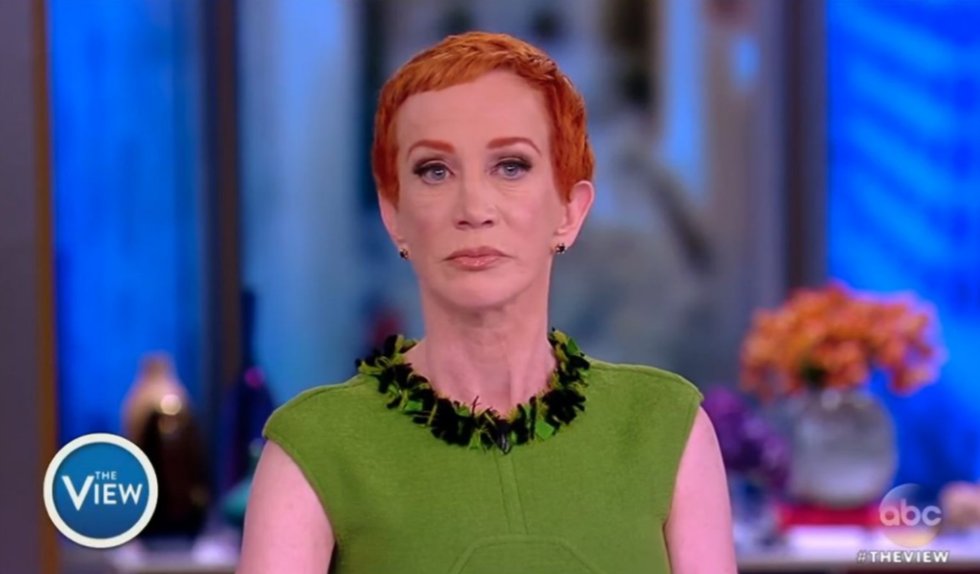 Kathy Griffin appearing on The View on ABC (The View/ABC)

.@kathygriffin says she regrets apologizing for the controversial Trump photoshoot, says she "wanted to make a statement of what a misogynist he is": "The First Amendment is the First Amendment for a reason — it's the first one!" https://t.co/f8u2wbJuikpic.twitter.com/hiTphteypv

It's been almost a year since comedian Kathy Griffin posed for a photo shoot with a prop designed to look like the bloodied head of President Donald Trump. Facing fierce backlash, Griffin apologized for the photo.

But on Monday's episode of The View on ABC, Griffin says all she regrets now is apologizing.

"What a year it's been," Griffin said. "By the way, I take the apology back. F--k him. And the sons, Don Jr. and Eric or as I call them, Eddie Munster and Date Rape."

Look, I'm not holding back on this family. This President is different and I have been through the mill and so now I'm back on the road."

Griffin states the mother of slain journalist Daniel Pearl, not Trump or his supporters, prompted her apology last year.

I do (regret apologizing) because that apology was... I performed in Iraq and Afghanistan, two places Trump has never been and can't find on a map. Of course because of my connection with the military I thought of Daniel Pearl's mother and…when I thought of her I thought, 'OK, apologize.'"

READ: The best US states to move to if you want to spend less

AT THE END OF THE HOLIDAY SEASON, one question always looms: “how much money that I don’t have did I just spend?