In Emotional Monologue, Jimmy Kimmel Makes Another Appeal on Healthcare 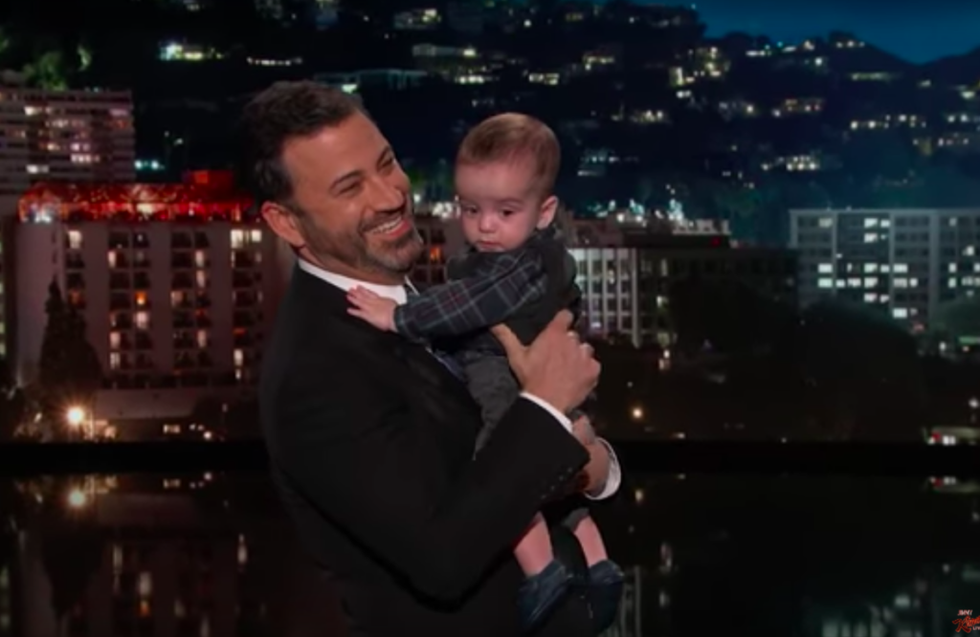 Jimmy Kimmel made another emotional plea for viewers to protect affordable access to health care during his show last night––and his son, Billy, who underwent a second heart surgery last week after being born with congenital heart disease, also made an appearance.

"Hi, I'm Jimmy. This is Billy," Kimmel said while holding his son. "He's fine everybody. He may have pooped, but he's fine."

Kimmel discussed the Children's Health Insurance Program (CHIP), a program which covers about 9 million children whose parents usually earn too much to qualify for Medicaid, but not enough to afford private health insurance. The program has been jeopardized because Congress failed to secure funding in October.

Overwhelmingly, Democrats and Republicans supported it until now. Now CHIP has become a bargaining chip. It’s on the back-burner while [Congress] works out their new tax plans," Kimmel said. "So that means parents of children with cancer and diabetes and heart problems are about to get letters saying their coverage could be cut off next month. Merry Christmas, right?"

He continued: "I don’t know what could be more disgusting than putting a tax cut that goes to rich people ahead of the lives of children. If these were potato chips they were taking away from us, we would be marching on Washington with pitchforks and spears right now."

Speaking about his son's condition, Kimmel said, "Billy is doing great, by the way. He has one more surgery," Kimmel said. "They say he'll probably on track to win at least a bronze medal in the Olympics in 2036."

Kimmel and his wife, Molly McNearny, who is also the co-head writer of Jimmy Kimmel Live, first made headlines in the spring after Billy was born and Kimmel spoke candidly about his heart defect and the emergency surgery which saved his life.

"We were brought up to believe that we live in the greatest country in the world. But until a few years ago, millions and millions of us had no access to health insurance at all,” Kimmel said at the time. “You know, before 2014, if you were born with congenital heart disease, like my son was, there’s a good chance you’d never be able to get health insurance, because you had a pre-existing condition.”

Kimmel acknowledged that he and his wife are lucky––they are in the financial position to afford any surgeries or treatments their son might need. His plea went viral, however, largely because of its appeal for bipartisanship.

“If your baby is going to die and it doesn’t have to, it shouldn’t matter how much money you make. I think that’s something that whether you’re a Republican or a Democrat or something else, we all agree on that, right?”

Shortly afterward, he noted: “We need to make sure that the people who represent us, and people are meeting about this right now in Washington, understand that very clearly. Let’s stop with the nonsense. This isn’t football. There are no teams. We are the team. It’s the United States. Don’t let their partisan squabbles divide us on something every decent person wants.”

A few months later, Kimmel made headlines again, this time for weighing in on the Graham-Cassidy Obamacare replacement bill––named for Senators Lindsey Graham (R-SC) and Bill Cassidy (R-LA)––which ultimately failed in the Senate. The bill would have stripped the ACA’s federal funding, and allowed the states to run individual health care programs. It would have also axed the “individual mandate” that requires people to buy insurance and roll back funding for Medicaid.

At the time, Kimmel said:

So, listen, health care is complicated. It’s boring. I don’t want to talk about it. The details are confusing, and that’s what these guys are relying on. They’re counting on you to be so overwhelmed with all the information you just trust them to take care of you, but they’re not taking care of you. They’re taking care of the people who give them money, like insurance companies. And we’re all just looking at our Instagram accounts and liking things while they’re voting on whether people can afford to keep their children alive or not.

Most of the congresspeople who vote on this bill probably won’t even read it. And they want us to do the same thing, they want us to treat it like an iTunes service agreement.

He also did not mince words when addressing those who've criticized him for placing his son's medical condition in the spotlight:

And by the way, before you post a nasty Facebook message saying I’m politicizing my son’s health problems, I want you to know: I am politicizing my son’s health problems because I have to. My family has health insurance, we don’t have to worry about this. But other people do, so you can shove your disgusting comments where your doctor won’t be giving you a prostate exam once they take your health-care benefits away.