Sean Hannity Tried to Shut Down Geraldo Rivera's Gun Control Rant, So He Took to Twitter Instead

A rare dose of sanity. 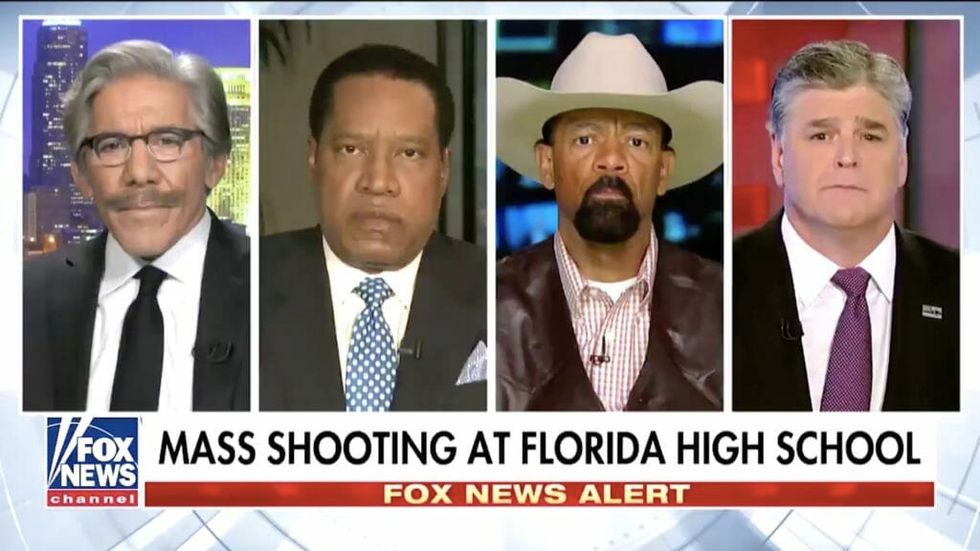 Geraldo Rivera made an impassioned plea for gun control during an appearance on Hannity late yesterday. Rivera focused not on mental health or the suggestion that schools might require armed guards stationed at all entrances, but the availability of the AR-15, the weapon shooter Nikolas Cruz used to kill 17 students at Stoneman Douglas High School in Parkland, Florida.

He continued: “It is just absolutely outrageous. Twenty-five of these school massacres since Columbine in 1999? When are we going to see that this is a national emergency?!”

Our Forefathers wrote the 2nd Amendment for one reason!

He doesn't care about national security!

Crazy Liberals with guns WILL! pic.twitter.com/JiMrTAEdNC

Rivera, who suggested that schools should be “at least as secure as airports,” then criticized President Donald Trump's proposal for a wall along the nation's southern border. The proposal, he noted, would cost about $25 billion––money better spent on security for schools nationwide.

"You want to spend $25 billion on a wall?” Rivera asked. “What about spending $25 billion on making our schools secure from these savages, who all they want to do is inflict blood and mayhem?”

In response, Sean Hannity attempted to redirect the conversation, insisting we need to “get away from” the “same, predictable, frankly insane, and intellectually lightweight” debates about guns. He ranked school security as a higher priority.

“I agree with everything you're saying,” Rivera replied, “but the AR-15 was designed to kill people. Ever since the Brady ban expired, we’ve been selling them like hotcakes.”

"This is not a gun debate,” Hannity replied. “This is a keep kids safe debate.”

Rivera disagreed, as a tweet he posted after the Hannity segment can attest. He proposed holding AR-15 manufacturers accountable when their products––"military-style assault weapons"––are used to kill innocent people, much in the same way Oxycodone manufacturers have come under Congressional scrutiny for exacerbating the opioid crisis.

Earlier in the day, Rivera said a "straight line can be drawn" from 1999's Columbine massacre to 2012's Sandy Hook shooting to yesterday's shooting in Parkland. "This is our 21st Century reality-our kids are targets for misanthropic psycho punk losers with big guns," he said.

They caught the little shit in #FloridaShooting Schools are too vulnerable. A straight line can be drawn from 1999… https://t.co/E49yd9YsLi
— Geraldo Rivera (@Geraldo Rivera) 1518643236.0