Trump Just Flipped Out on Reporters Who Asked Him If He's Concerned About Being Indicted Once He Leaves Office, and He's Lying Again 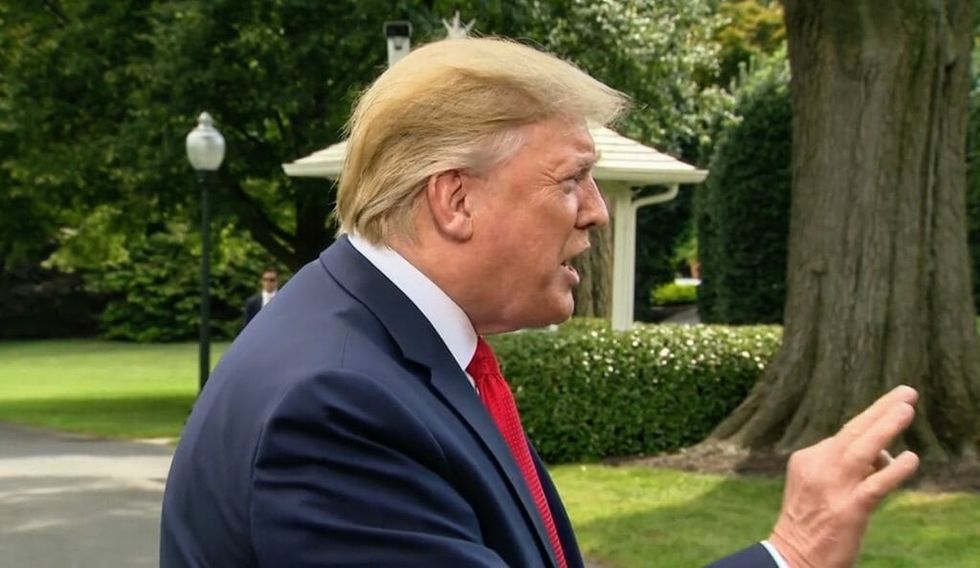 One of the most memorable moments during former Special Counsel Robert Mueller's testimony on Wednesday featured Mueller stating that President Donald Trump could be charged for obstruction of justice after leaving office.

Perhaps unsurprisingly, Trump had a lot to say to reporters about the possibility of charges down the line.

During a press gaggle, NBC News correspondent Hallie Jackson asked a question many people wondered after watching Mueller testify. Was President Trump concerned about facing indictments after he left office?

Trump fired back at Jackson that the claim was "fake news," insisting that Mueller corrected himself about the possibility of future charges.

The President said to Jackson:

"When you saw Robert Mueller’s statement. The earlier statement, and then he did a recap. He did a correction later on in the afternoon..And you know what that correction was, and you still ask the question. You know why? Because you're fake news. And you're one of the most."

"The fact that you even ask that question, you’re fake news because you know what, he totally corrected himself in the afternoon and you know that just as well as anybody."

Trump gets mad when a reporter asks him if he's concerned about getting indicted after he leaves office, says "Wiki… https://t.co/QpUtHrupoL
— Aaron Rupar (@Aaron Rupar) 1564002061.0

Unfortunately for Trump, people do know what the correction was about and it's not what he claims. When fact checked in real time, the President again lies and calls another female reporter "fake news" for confronting him with facts.

Trump is totally in denial about the real possibility that he could be indicted after he leaves office, berates a s… https://t.co/BGDMr7ebBz
— Aaron Rupar (@Aaron Rupar) 1564002221.0

Then the President yelled at yet another female reporter as reported by C-SPAN.

The exchange between President Trump and a reporter asking about a line of questioning in today's #MuellerHearings… https://t.co/AjqsUe4dAY
— CSPAN (@CSPAN) 1564004172.0

The President said Mueller backtracked on the issue of a possibility of indictments after he leaves office. That is false.

What Mueller actually corrected was a characterization that his office decided to not charge Trump solely based on Justice Department policy that a sitting President  cannot be indicted. He later stated that was incorrect phrasing as his office had made no decisions regarding guilt or innocence.

But when asked again about the possibility of Trump facing future indictments, Mueller replied again that it was possible.

The President also made claims of the investigation which lead to a number of indictments, convictions and sentences was a witch hunt, a hoax and the result of lies by Democrats among others.

Trump also backtracked on his own claims of "total exoneration" then stated six networks asked the White House not to come in to the press office because no one would be covering Mueller's testimony.

People were not surprised the President refused to face facts or answer honestly.

People nailed down the definition of Trump's fake news: any news he does not like.

And one person had a wish for Hallie Jackson.