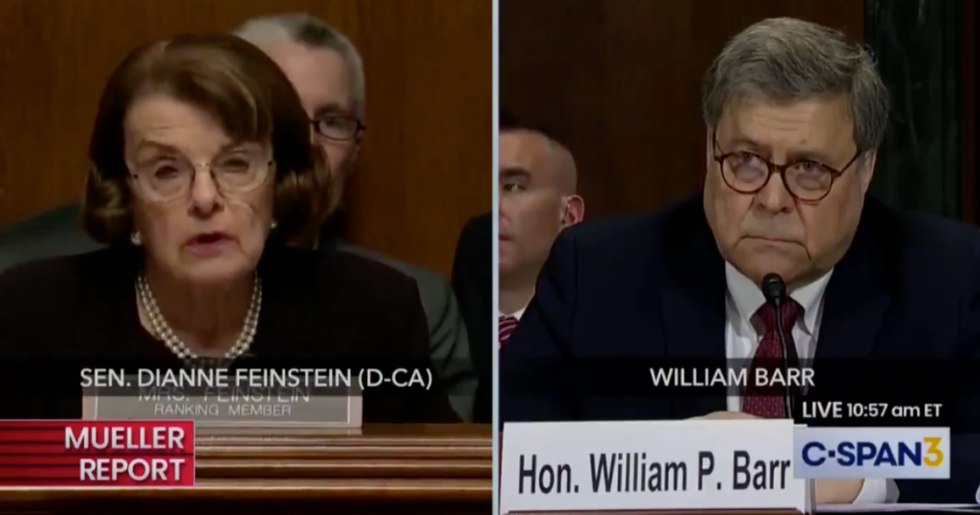 During his testimony before the Senate Judiciary Committee on Wednesday, Attorney General William Barr insisted that President Donald Trump ordering his underlings to lie to Special Counsel Robert Mueller did not meet the definition of obstruction of justice.

Mueller outlined in his report that Trump had instructed then-White House Counsel Don McGahn to deny that he had ordered McGahn to fire Mueller:

"The President asked McGahn, 'Did I say the word "fire"?' McGahn responded, 'What you said is, "Call Rod [Rosenstein], tell Rod that Mueller has conflicts and can't be the Special Counsel."' The President responded, 'I never said that.'"

Trump "called McGahn and directed him to have the Special Counsel removed," Mueller wrote in his report. “In interviews with this Office, McGahn recalled that the President called him at home twice and on both occasions directed him to call [Deputy Attorney General Rod] Rosenstein and say that Mueller had conflicts that precluded him from serving as Special Counsel.”

Watch Barr try and explain to Feinstein how a crime is not a crime. #BarrHearing https://t.co/lfz3tQKwW7
— Amee Vanderpool (@Amee Vanderpool) 1556723240.0

“The special counsel in his report found substantial evidence that the president tried to change McGahn’s in order to prevent, and this is a quote, ‘further scrutiny of the president toward the investigation,’” Feinstein said during Barr’s testimony. “The special counsel also found McGahn is a credible witness with no motives to lie or exaggerate, so what I’m asking you then is that a credible charge under the obstruction statute?”

Barr insisted that "at that episode, the government would not be able to establish obstruction. If you go back and look at the episode where the president gave McGahn an instruction, McGahn’s version of that is quite clear.”

Feinstein was not buying it.

"You still have a situation where a president tried to change the lawyer's account in order to prevent further criticism of himself," Feinstein said.

"So you can, in this situation, instruct someone to lie?" she asked.

"No," Barr said. "To be obstruction of justice, the lie has to be tied to impairing evidence in a particular proceeding."

Barr insisted that "there is a distinction between someone saying ‘go fire him, go fire Mueller’ and saying ‘go have him removed because of conflict of interest."

Although her questions were tough and pointed, Feinstein's lack of a stronger rebuttal to Barr's hairsplitting defense of Trump has some legal experts exasperated.

This was one of the most stunning moments in today's hearing. The fact that Senator Feinstein didn't have a crystal… https://t.co/r4fpGRWSDa
— Asha Rangappa (@Asha Rangappa) 1556727476.0

Re what AG Barr just said to Feinstein about how direct POTUS was with McGahn about firing Mueller, here’s what Mue… https://t.co/Fm1CNb52Ov
— Jake Tapper (@Jake Tapper) 1556723950.0

Feinstein exchange was largely irrelevant. She should have started with Mueller letter. The Rs are firing on all pr… https://t.co/0YhBu1puzM
— David Corn (@David Corn) 1556722949.0

I'm sorry to say I think Senator Feinstein is showing her age when trying to question Barr in follow up questions.
— Marcy Strauss (@Marcy Strauss) 1556722815.0

Feinstein: "Isn't what I just described obstruction?" Barr: "Yes. Wait, are you speaking in general or specific to… https://t.co/VXaR7zOPSy
— Craig Rozniecki (@Craig Rozniecki) 1556722769.0

But that is far less frustrating than Barr's distortion of the facts and misleading characterization of Mueller's findings.

@girlsreallyrule barr is simultaneously the witness and the judge stating that trump was just trying to correct the… https://t.co/2lTu3gxvYt
— Brother Pizza (@Brother Pizza) 1556729651.0

@girlsreallyrule Barr is just defending Trump, as if he were his attorney, not defending what is correct for the people as AG! Disgusting!
— ewbrownell (@ewbrownell) 1556734444.0

So what does the obstruction of justice statute say?

Shall, except as otherwise provided by law, be fined under this title or imprisoned not more than one year, or both."

The law is crystal clear. Barr, however, has written that he does not believe a president can commit obstruction because of his or her enumerated executive powers.

?1512(c)(2)," Barr wrote to Trump in a memo last summer, a few months before he was nominated to replace Jeff Sessions. "It is untenable as a matter of law and cannot provide a legitimate basis for interrogating the President."

Charging Trump with obstruction, Barr said, "would violate Article II of the Constitution by impermissibly burdening the exercise of core discretionary powers within the Executive branch."