Former Republican Congressman Tells Democrats How They Can Defeat the NRA

"Republicans are not going to do anything." 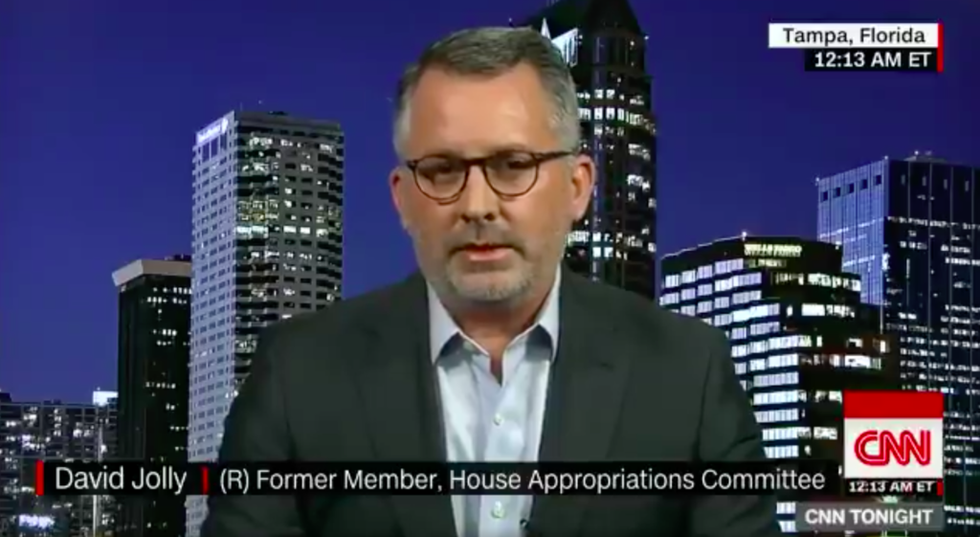 David Jolly, a former Republican Congressman says that if Americans want legitimate gun control legislation in the wake of Wednesday's mass shooting in Parkland, Florida, then they need to vote the GOP out of office.

“Republicans are not going to do anything on gun control,” Jolly told The Washington Post yesterday. "And history shows that.” He continued: “The idea of gun policy in the Republican party is to try to get a speaking slot at the NRA and prove to that constituency that you are further right than generations past on guns."

Then he offered some advice: “If this is the issue that defines your ideology as a voter, there are two things I would suggest tonight. First, flip the House. Flip the House. Republicans are not going to do a single thing after this shooting we saw today.”

Noting that Americans are “begging for leadership” as they wrangle with the nation's gun problem, he said that the unwillingness to compromise has placed both Republicans and Democrats in deadlock. “Democratic leadership have been the loudest voices on gun control but are really unwilling to consider compromise,” he said.

Jolly pointed to his own record while a member of Congress to illustrate his point. In 2016, he sponsored a bill restricting gun purchases for people on the FBI’s terrorist watch list. Attached to this bill was a measure for a due-process hearing if purchasers felt they were wrongly denied a firearm. He believed the bill had bipartisan support, but his efforts were stymied when Democratic leadership withdrew their support because elections were months away and they did not want to help pass Republican-drafted legislation. The issue remains unresolved.

The NRA backed the bill's due-process component, Jolly recalled. He had benefited from the NRA's support: The organization spent at least $108,000 to prevent the election of Democrat Alex Sink, saying that to elect him would be to "curtail [our] freedom." Jolly won the seat. Although his consultants recommended he join the NRA, Jolly declined, because of the group's to consider how gun laws might evolve "amid calls for more stringent background checks and restrictions on semiautomatic rifles."

Which brought him to his next piece of advice for Democrats: They should, he suggested, build a coalition with law enforcement groups that align on gun regulation. Police officers tend to lean conservative, he said, but, as the Post notes, "their dangerous jobs in a country awash in guns often translate to support for gun-policy measures and restrictions often championed by Democrats."

Perhaps most strikingly, Jolly said it might be time to vote the GOP out of Congress because of their inability––or perhaps their refusal––to keep President Donald Trump in check.

“We do know that we have a president who very well might put this nation at risk and this Republican Congress has done nothing to check his power,” Jolly said. “Democrats could, and we might be better off as a republic if they take the House in 2018.”