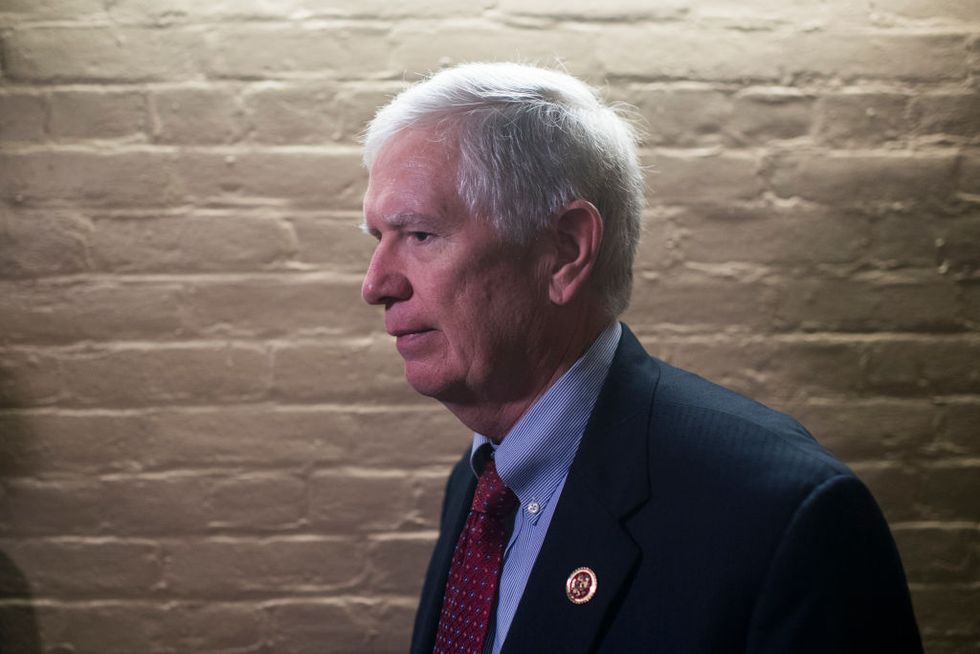 Alabama Republican Representative Mo Brooks asked if rocks are causing sea levels to rise at a hearing by the House Committee on Science, Space, and Technology titled "Using Technology to Address Climate Change."

While questioning Philip Duffy, president of Woods Hole Research Center, about what, in addition to climate change, might be contributing to rising sea levels, Brooks interjected with his theory, which suggested erosion is the culprit:

Every single year that we’re on Earth, you have huge tons of silt deposited by the Mississippi River, by the Amazon River, by the Nile, by every major river system — and for that matter, creek, all the way down to the smallest systems. And every time you have that soil or rock whatever it is that is deposited into the seas, that forces the sea levels to rise. Because now you’ve got less space in those oceans because the bottom is moving up.

Brooks used the White Cliffs of Dover to support his theory, as well as California "where you have the waves crashing against the shorelines" and "you have the cliffs crash into the sea."

"All of that displaces the water which forces it to rise, does it not?" Brooks asked.

"I’m pretty sure that on human time scales, those are minuscule effects," Duffy replied.

Brooks then claimed that Antarctic ice is growing. Duffy countered that, saying that satellite records have documented "shrinkage of the Antarctic ice sheet and an acceleration of that shrinkage."

"I've got a NASA base in my district," Brooks said. "And apparently, they're telling you one thing and me a different thing."

But the NASA website notes that Antarctica's ice sheets have lost mass since 2002, and that "Sea level rise is caused primarily by two factors related to global warming: the added water from melting ice sheets and glaciers and the expansion of seawater as it warms."

"One lawmaker said temperatures were not rising, another brought up global cooling, and Mo Brooks suggested land erosion caused rising sea level on a global scale. These are all members of the Science Committee," wrote CNN's Andrew Kaczynski.

Retired NASA astronaut Mark Kelly wrote: "Sad that some members on the science committee in the US House of Representatives don’t believe in science. @RepMoBrooks, I’m sure there is an open desk in a fifth grade classroom somewhere in your district."

Sad that some members on the science committee in the US House of Representatives don’t believe in science.… https://t.co/c4czQdrajH
— Mark Kelly (@Mark Kelly) 1526592565.0

"We need @BillNye to help out Rep. Mo Brooks and explain sea level rise," wrote one Twitter user, referring to the science educator and television personality."

Journalist Dan Rather also weighed in. "Climate change and resulting sea level rise is not fake news. And it can't be lost amidst all the other noise of our current news cycle," he said.

Meanwhile, THIS was happening in our House of Representative yesterday. The whole article is worth a read and a sha… https://t.co/FqAMGrK0fx
— Dan Rather (@Dan Rather) 1526586210.0

Others merely let the politician's words speak for themselves.

Speaking to CNN afterward, Duffy, who worked on climate change policy in the Obama administration, said that he expected skepticism from the committee and that he had never heard an explanation quite like the one Brooks provided.

"None of that is new," Duffy said. "They've been doing that forever."

Meanwhile, Jim Bridenstine, the new administrator of NASA, held a town hall at the agency's headquarters. Bridenstine had earlier come under fire during his Senate confirmation hearing for his past remarks denying climate change. This time, however, when questioned by a moderator, he appeared to have changed his mind.

"As far as my position on climate change and how it’s evolved, I’ll be very open,” Bridenstine said.

I don’t deny that consensus that the climate is changing. In fact, I fully believe and know that the climate is changing. I also know that we humans beings are contributing to it in a major way. Carbon dioxide is a greenhouse gas. We’re putting it into the atmosphere in volumes that we haven’t seen, and that greenhouse gas is warming the planet. That is absolutely happening, and we are responsible for it.