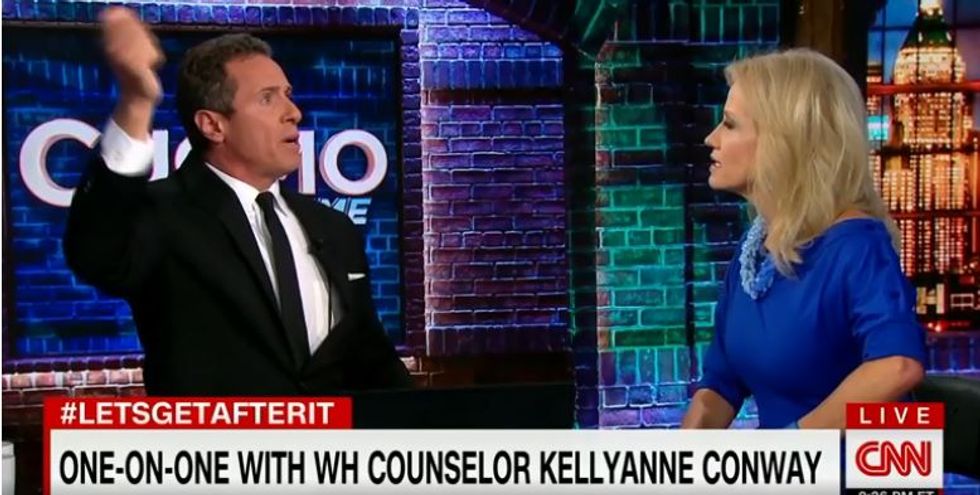 In addition to NFL protests and President Donald Trump's numerous scandals, the two argued over the White House's statements regarding the murder of Mollie Tibbetts, whose killer--Cristhian Bahena Rivera--is believed to be an undocumented immigrant.

The White House has not shied away from exploiting Tibbetts's death for their own political advantage.

Donald Trump recently posted a video on Twitter in which he lamented that the "incredible young woman, is now permanently separated from her family." The president's odd word choice was taken by many as an attempt by Trump to use Tibbetts's death to justify his widely-abhorred policy of separating undocumented families attempting to cross the Southern border.

The White House released another video in which it blames undocumented immigrants for family separation, once again invoking Tibbetts's murder.

With these statements in mind, Cuomo confronted Conway directly, accusing the White House of "hijacking her grief."

Stop giving Kellyanne Conway any airtime. All she wants to do is spew garbage, but kudos to @ChrisCuomo for standin… https://t.co/p6rZNIpH0k
— Zack Ford (@Zack Ford) 1535119544.0

After Conway said "God rest her soul" referring to Tibbetts, Cuomo shot back:

"You're not letting her soul rest, you're waving her like a flag!"

What's more, Tibbetts's family and friends have spoken out against the White House and others using her death at the hands of one man to vilify immigrants everywhere. Breck Goodman, a friend of Tibbetts, said at a vigil in Iowa:

Cuomo's ire echoes the feelings of Tibbetts's own family, members of whom have spoken out against the exploitation of her death by conservatives. Tibbetts's second cousin took to Twitter on Tuesday criticizing conservative commentator Candace Owens for her statements on the Democrats' reaction to Tibbetts's death.

Their arguments have been bolstered by the resurfacing of many liberal tweets from Tibbetts herself.

Tweets from Tibbetts that have been resurrected since her murder do well to assure that she wouldn't want her death used to justify discrimination.

She routinely tweeted sentiments that were pro-immigration and also called out the president's own hypocrisy.

Tbh if a piece of bread ran for president in this election I'd probably vote for it🇺🇸🍞
— Mollie Tibbetts (@Mollie Tibbetts) 1469482212.0

Tragically, many members of the far right are using these tweets not as an indication of the values Tibbetts stood for, but as an instance to pat themselves on the back for being "right" about what they believe led to Tibbetts's murder. The comments seem to diametrically oppose the angle of compassion White House spokespeople like Kellyanne Conway are trying to portray.

And they're harassing her friends as well.

Like Cuomo, many see the White House's actions as an effort to reduce Tibbetts' murder to a talking point in an effort to defend policies thought by many to be indefensible--policies that Tibbetts is documented to have detested. The country would do well to remember her aunt Billie Jo Calderwood's words in a now-removed Facebook post: "Evil comes in EVERY color."