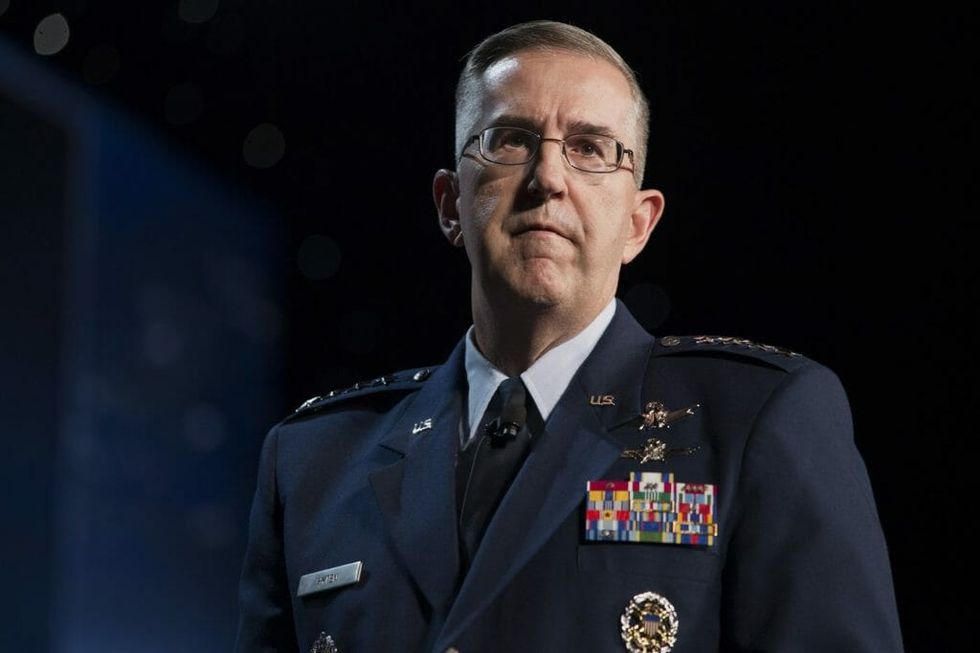 The top U.S. nuclear commander said Saturday that he would refuse an order from President Donald Trump, to launch nuclear weapons, if he determines it to be "illegal." Air Force General John Hyten, commander of the US Strategic Command (STRATCOM), told a panel at the Halifax international Security Forum in Nova Scotia, Canada that there is a process that prevents any U.S. president from carrying out an illegal strike.

Hyten explained how the conversation would go with the president if such a scenario were to occur. If Trump decided to launch a nuclear attack, Hyten would then provide the president with strike options that are legal.

“I think some people think we’re stupid,” Hyten said in response to a question about such a scenario. “We’re not stupid people. We think about these things a lot. When you have this responsibility, how do you not think about it?“

Hyten, who is responsible for overseeing the US nuclear arsenal, reminded everyone that "If you execute an unlawful order, you will go to jail. You could go to jail for the rest of your life." He then explained the process that would follow such a command. “I provide advice to the president, he will tell me what to do,”

And we’ll come up with options, of a mix of capabilities to respond to whatever the situation is, and that’s the way it works. It’s not that complicated.

Hyten's remarks come at a time of unrest and uncertainty, with increasing tensions between between Trump and North Korea's leader spewing out on Twitter and in the news, leaving many to believe in a heightened threat of attack from Pyongyang, the capital of North Korea. Between Trump's lack of temperament and his taunting tweets aimed at Kim Jong-un, critics are concerned that the president's reckless behavior will incite a nuclear war.

Retired General Robert Kehler, who served as the head of STRATCOM from January 2011 to November 2013, also said in a recent testimony before the Senate Foreign Relations Committee that the U.S. armed forces are obligated to follow legal orders, not illegal ones. He explained that there are layers of safeguards within the current system designed to ensure any order is both legal and proportionally appropriate.

The hearing, the first of it's kind in more than 40 years, was held to discuss the president's authority to launch nuclear weapons. "U.S. nuclear forces operate under strict civilian control. Only the President of the United States can order the employment of US nuclear weapons," Kehler said.

In case the president does give the order for a nuclear strike and it is determined to be a legal order, preparations have already been made so the military can act quickly on those commands.

It was reported last month that the United States Air Force began preparing their nuclear-armed B-52 bomber planes in anticipation that they’ll receive the order to go to 24-hour alert status - an order we have not seen since the ending of the Cold War in 1991.

According to a Defense One report, these preparations involve renovating the long-dormant concrete “alert pads” at the end of the runway at Louisiana’s Barksdale Air Force Base, where B-52s once parked, ready to take flight at a moment’s notice with their nuclear arsenal. Not only could these pads find themselves occupied again, if the order is given, but the renovations currently under way will allow pilots and aircrews to position themselves alongside the bombers.

General David Goldfein, Air Force chief of staff, said this is nothing more than being prepared for any possibility: “This is yet one more step in ensuring that we’re prepared,” he said in an interview with Defense One while touring Barksdale and other U.S. bases that support nuclear action.

“I look at it more as not planning for any specific event, but more for the reality of the global situation we find ourselves in and how we ensure we’re prepared going forward.”