Adam Rippon Just Revealed What He'd Say to Mike Pence, and He Makes an Important Point 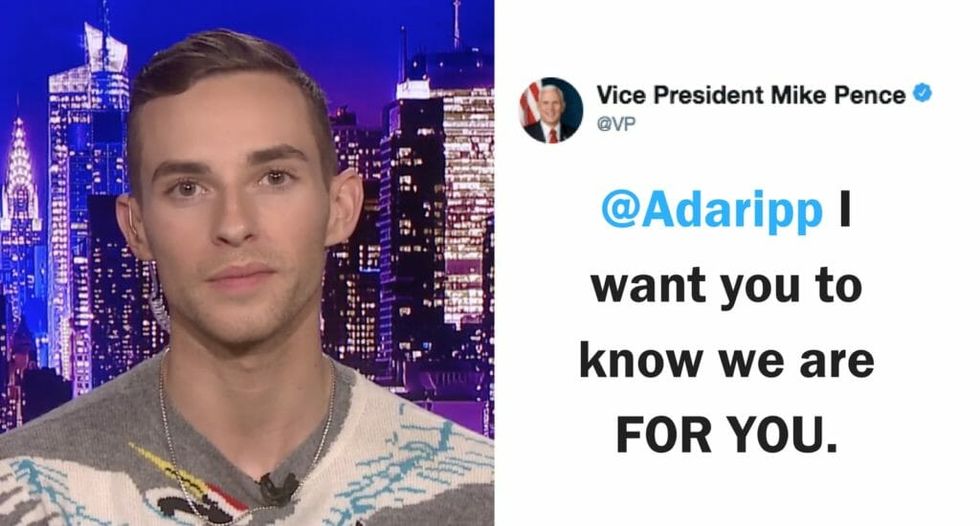 Adam Rippon made history in 2018 when he became the first openly gay U.S. athlete to qualify for the Olympics. Other athletes came out after their Olympic tenure or after making their respective teams.

Rippon was not a fan.

While running for congress in 2000, Pence's official record on LGBTQ equality is quite clear.

He is opposed to it.

Rippon shared his views on MSNBC.

Many in the LGBTQ+ community point to Pence's own campaign materials as proof of his not being "for" all Americans.

In the 18 years since that congressional run, Mike Pence only reinforced his views, especially during the period he served as governor of Indiana.

In 2007, while serving as a Member of the U.S. House of Representatives from Indiana, Pence voted against the Employment Non-Discrimination Act.

While serving as Governor, Pence signed Indiana’s controversial ‘Religious Freedom Restoration Act’, a law which allows religious people to cite their personal beliefs applied to their public business as a defense in cases of discrimination. Pence made it clear the law was intended to “protect” businesses who want to refuse services to same-sex couples, although the law could be used to protect any form of discrimination.

Because of this, Rippon said the vice president was a “bad fit” to represent the diverse U.S. Olympic delegation.

Pence declared Rippon's concerns the product of "fake news", despite public records to the contrary and asked to meet with Rippon before the games. The athlete declined, citing preparations to compete. Rippon also noted he doesn’t do any social activities while training.

I felt like maybe meeting with the vice president might be a little bit more distracting than trying to see ‘Bridesmaids’ or going to Maggianos. So I had to decline it.”

Pence tweeted at Rippon right before the opening ceremony.

Now that the Olympics and Rippon's training ended, the athlete wondered if that invitation to meet is still open.

“While I was grateful to get that tweet, will he still be for me when one day I hopefully will get married?” Rippon asked during an interview on MSNBC.

When I come back home are you still for me? Are you still for that trans man or woman that wants to join the military? I think that’s what I want to ask … I think everybody deserves to have the opportunity to live their life to the fullest, especially if they want to serve their country or marry the person that they love or just go to the bathroom.”