Washington Post Fact Checker Had to Come Up With a Whole New Category for All the Lies Donald Trump Has Repeated More Than 20 Times, And Hoo Boy, There Are a Lot 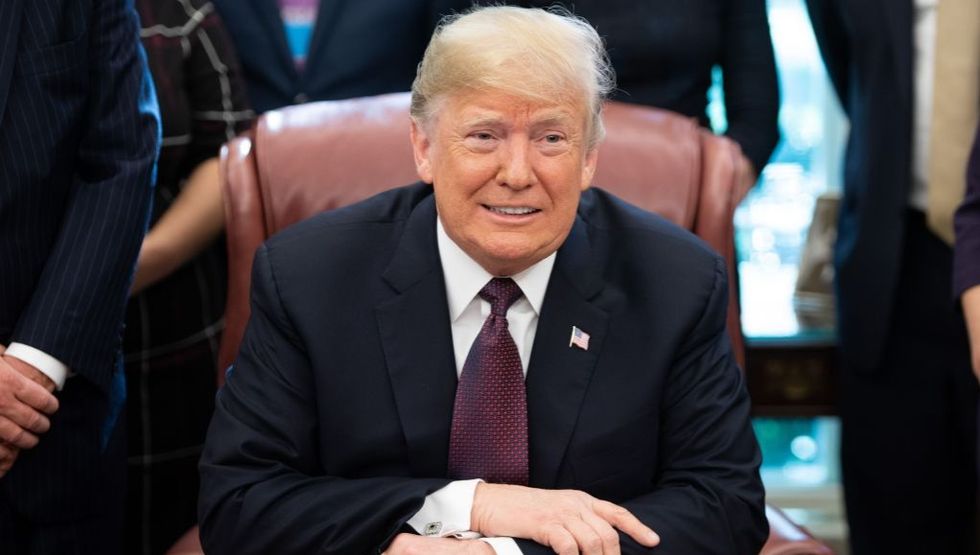 US President Donald Trump speaks in the Oval Office of the White House in Washington, DC, November 16, 2018. (Photo by SAUL LOEB/AFP/Getty Images)

It's common knowledge that politicians often misconstrue the truth and occasionally even lie, but it wasn't until the campaign and election of President Donald Trump that outright lies from the head of the executive branch and those serving him became the new normal.

Not only does Trump lie (6,240 times since his inauguration at last count), but he freely repeats the lies as well with the assurance that his base will believe him over the journalists he's spent the last three years vilifying.

So comfortable is the President with repeating long-debunked lies that the Washington Post has created a whole new category for him in their fact-checking department.

The fact-checker has previously rated the level of a statement's falsehood with "Pinocchios" ranging on a scale from one to four, with four Pinocchios being outright false. However, the President has repeated "four Pinocchio" statements so many times, the Washington Post has introduced "Bottomless Pinocchios," reserved for lies ranging from three to four Pinnochios repeated over 20 times.

It's an easier feat for the President than many may realize. For instance, Trump has repeated the false claim that his administration passed the biggest tax cut in history a whopping 123 times. Exaggerating the United States' trade deficits? 117 times. In fact, 14 of the President's statements have qualified for the prestigious distinction of Bottomless Pinocchios.

@kylegriffin1 Congrats @realDonaldTrump , looks like you finally won something all on your own https://t.co/H0DZi2RHTf
— Democracy wins (@Democracy wins) 1544474515.0

However, there's still some discontent.

As Trump's lies have grown more and more blatant, Americans have pressured the media to stop replacing the word "lies" with softer ones like "false statements," "misleading claims," or—in this case—"Pinocchios."

@kylegriffin1 Gaslighting complete. Moved on from discussing how abhorrent it is that he lies to us, and now we're… https://t.co/tgU1yC6sMO
— Martin Clifford (@Martin Clifford) 1544474762.0

For its part, The Washington Post has long been a thorn in Trump's—and a certain other corrupt president's—side. In fact, the same journalist who helped expose the Watergate coverup during the Nixon era, Bob Woodward, also wrote Fear: Trump in the White House, which used hours of recorded interviews and hundreds of documents to cover a President whose administration is a sinking ship. During a normal Presidency, Americans would likely still be talking about the book, which was released in September, and a normal President would have had to heavily strategize to discredit it. After a few scathing tweets from the President, it's now largely forgotten.

That's because, to many, this is not a normal presidency nor is this a normal President, largely thanks to a sheer willingness—perhaps even eagerness—to lie.

The President may never win that elusive Nobel Peace Prize for his talks with North Korea's Kim Jong Un, but thanks to the Washington Post, he is the only figure with the distinction of 14 bottomless Pinocchios—a fitting tribute.