County Sheriffs in Washington State Are Refusing to Enforce a New Gun Control Law, and the State's AG Just Responded With Consequences 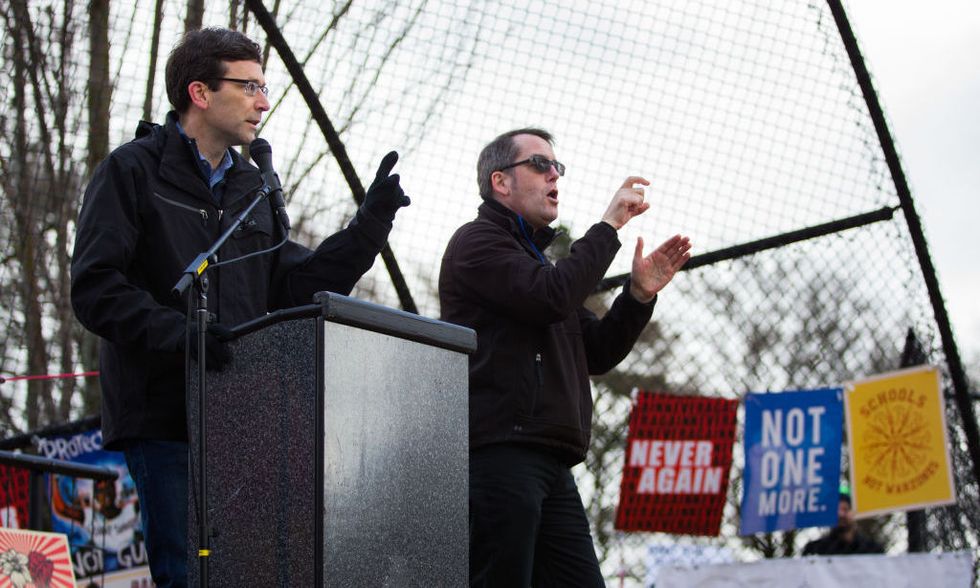 After a series of mass shootings in the last two years leading up to the November 2018 elections and little response beyond thoughts and prayers from a Republican controlled White House and Congress, voters in Washington state decided to pass their own tougher restrictions. Gun control initiative 1639 passed with almost 60 percent approval.

But 13 sheriffs in the state publicly declared they do not care about laws or the public's mandates. After they stated they would ignore the laws of Washington state in favor of their own opinions, Attorney General Bob Ferguson addressed the issue with an open letter outlining the consequences of law enforcement officials disobeying and disregarding laws they do not like.

The mostly rural sheriffs who intend to disregard the law questioned its constitutionality. Ferguson, who is trained in constitutional law addressed their concerns.

Gun rights organizations, the NRA and Second Amendment Foundation, attempted to sue the state over their citizen passed legislation, but their suit was withdrawn. It was refiled with Washington state law enforcement members listed as the defendants.

In Ferguson's two page response to the sheriffs' refusals to enforce state law, he addressed law enforcements disregard for the rule of law in favor of gun rights. It is worth noting laws later deemed unconstitutional, like "stop and frisk," do not receive law enforcement pushback but background checks before purchase on semi-automatics and an age limit on semi-automatic purchases and holding careless gun owners accountable does.

Are law enforcement officials concerned with the rights of citizens or possible reductions in gun sales?

Sheriffs refusing to follow the law claim it is unconstitutional, but fail to specify which parts of the law they object to and which parts they plan to not enforce.

In his letter, Ferguson points out that the background check that will be required beginning July 1 for semi-automatic weapons is the same one currently in use on handgun sales. So what is the issue there?

"These enhanced background checks keep guns out of the hands of dangerous individuals who lawfully cannot own firearms because of a mental illness or criminal record. As far as I know, no Washington sheriff or police chief has refused to perform these enhanced background checks for handguns. Why refuse to perform them for semiautomatic assault rifles?"

Ferguson outlines the issue he has with non-compliance with background checks in the excerpt below.

And not performing those checks "in good faith" bears consequences.

"However, in the event a police chief or sheriff refuses to perform the background check required by Initiative 1639, they could be held liable if there is a sale or transfer of a firearm to a dangerous individual prohibited from possessing a firearm and that individual uses that firearm to do harm."

"In short, the taxpayers of your city or county assume the financial risk of your decision to impose your personal views over the law."

"My job as a sheriff is to throw bad guys in jail, but it’s also to protect the constitutional rights of citizens of our county. I follow the rule of law when I believe it’s constitutional."

It is that component of individual law enforcement officials like Songer—who has no training in constitutional law or a law degree of any kind—deciding what laws to enforce on the basis of what they believe instead of the actual constitution or constitutional review by qualified individuals that concerns so many.

Should all members of law enforcement decide based on what they believe? Can they make up laws too or just ignore ones they do not like?

Conspiracy theorist Alex Jones interviewed Songer back in January. Like Jones, Songer portrays himself as a defender of freedom through willful disregard of rules, regulations, terms of service and laws.

Both also identify others as "the bad guys" while they break laws themselves.

County sheriffs are elected positions in Washington state and many are citing campaign coffers over conscience or constitution in the decision making process.

Regardless of their individual motivations, AG Ferguson stated to them all:

"This is not a [state's rights] situation where the federal government is trying to force the state to enforce federal laws. If you personally disagree with Initiative 1639, seek to change it. Or file a lawsuit challenging it. But do not substitute your personal views over that of the people."

An official response from the law enforcement officials that announced their intention to disregard the law has not yet been issued.