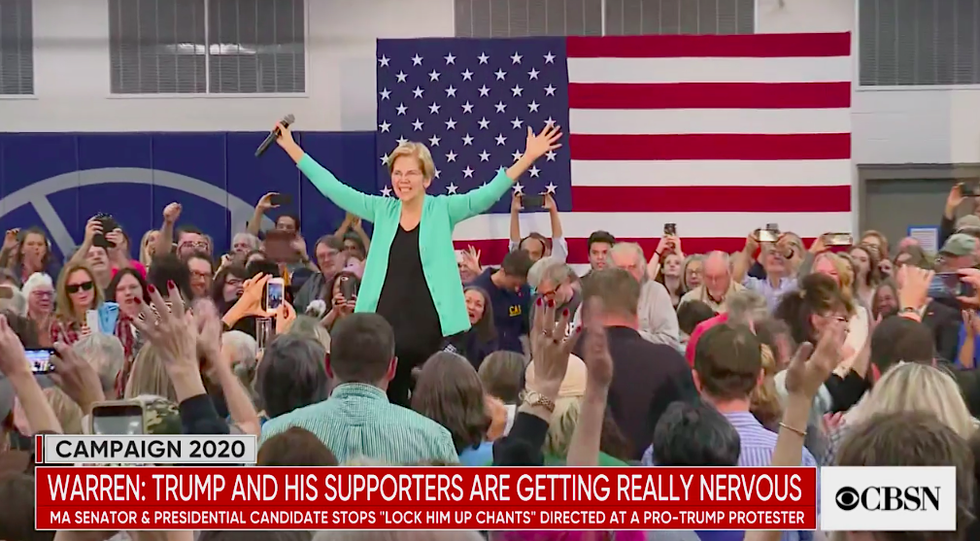 President Donald Trump takes every opportunity he can to mock Massachusetts Democratic Senator Elizabeth Warren, but the 2020 presidential candidate does not return the childish brand of animosity. Trump refers to Warren with racist name calling, despite being asked repeatedly to stop by Native American leaders.

Including at a recent taxpayer funded event in Florida that was not supposed to be a Trump campaign event.

This is not supposed to be a campaign speech but here's Trump using a slur to demean Elizabeth Warren and talking a… https://t.co/hTHXUUXn9l
— Aaron Rupar (@Aaron Rupar) 1570126002.0

But when the opportunity to mock Trump arose at her own campaign rally in Nevada, Warren stopped the crowd from chanting:

The chant was prompted by a Trump supporting protester. But Warren quieted the crowd then said:

"There's a lot we need to do, and I understand that Donald Trump and his supporters are getting really nervous. And they have a good reason to be."

"We're not here just to worry about Donald Trump. We're here to talk about a positive vision for how we build an America that works for everybody."

"And I'll be clear. When I say 'for everyone,' I mean everyone including Donald Trump supporters."

Trump's supporters failed to show Warren the same courtesy or consideration when they followed her through an airport yelling Trump's own racist nickname for the Senator.

Despite Warren being attacked by Trump and his followers with racist rhetoric for years, her compassionate response to a Trump supporter at her rally drew praise.

Senator Warren's book This Fight Is Our Fight: The Battle to Save America's Middle Class is available here.