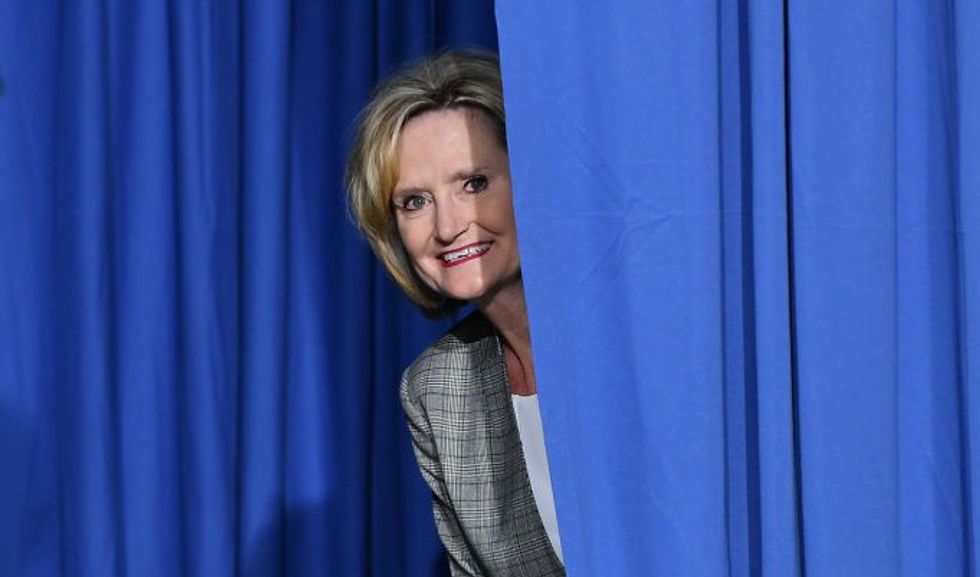 Senator Cindy Hyde-Smith peaks out from behind a curtain before a rally with US President Donald Trump at Landers Center Ð Arena in Southaven, Mississippi, on October 2, 2018. (Photo by MANDEL NGAN/AFP/Getty Images)

Hyde-Smith faces a run-off against Democratic challenger Mike Espy—United States Secretary of Agriculture under President Bill Clinton. Espy was the first African American to hold that cabinet position and the first from the deep South.

But the pending return to the polls is not why Hyde-Smith keeps making the news. Hyde-Smith's particular brand of humor keeps drawing national outrage.

First, the incumbent Senator made what she deemed a joke about eagerly attending a lynching.  In thanking a cattle rancher for his support, the Senator said:

"If he invited me to a public hanging, I’d be on the front row."

People found her comment distasteful, especially considering it was said by a White woman running against a Black man in Mississippi.

Emmett Louis Till was lynched in Mississippi in 1955 at the age of 14, after being accused of offending a white woman in her family's grocery store.

Now some of Hyde-Smith's campaign contributors are not laughing. They even asked for their money back.

Walmart, donor of $2,000 to Hyde-Smith's campaign, announced their decision on Twitter in response to a post by Will and Grace actress Debra Messing, stated:

"Hi Debra. Completely understand your concern. Sen. Hyde-Smith’s recent comments clearly do not reflect the values of our company and associates. As a result, we are withdrawing our support and requesting a refund of all campaign donations."

Walmart was not alone in their desire to distance themselves from Hyde-Smith and her recent remarks. Railroad company Union Pacific, defense contractor Leidos—$5,000 campaign donors— and manufacturer Boston Scientific—a $2,500 donor—also asked for refunds.

Union Pacific also made their stance clear on Twitter. They stated:

"Union Pacific in no way, shape or form condones or supports divisive or perceived to be divisive statements. Our contribution was mailed prior to Hyde-Smith's statement being made public. Union Pacific requested a refund of our donation yesterday."

Hyde-Smith refused to apologize for either remark.

As a result, she found little sympathy online.

People applauded the decision by Walmart.

@CNBC She is the definition of racists. The sad thing is that some people might vote for her to win.
— Fadil Americano (@Fadil Americano) 1542730104.0

And while people appreciated Walmart withdrawing their support, many still chastised the company for ever supporting Hyde-Smith at all.

Meanwhile, Mike Espy made a bit of his own social media news with this encounter with school children.

Mississippians return to the polls to decide their Senator on Tuesday, November 27.