New Poll of Wisconsin, Michigan and Minnesota Voters Has Very Bad News for Republicans in 2018—and for Trump in 2020 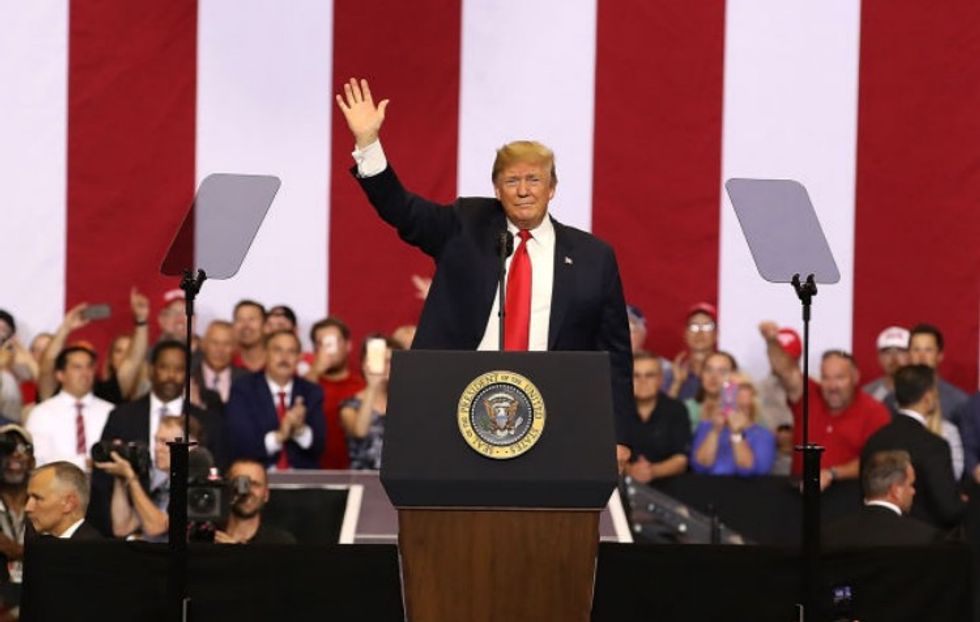 U.S. president Donald Trump speaks to supporters during a campaign rally at Scheels Arena on June 27, 2018 in Fargo, North Dakota with thousands in attendance. (Photo by Justin Sullivan/Getty Images)

In three midwestern states, two of which were pivotal in the 2016 presidential election, the tides have turned on President Donald Trump. Michigan and Wisconsin, which both chose Trump in 2016, think in 2020, someone else should take the reins.

The third state, Minnesota chose Clinton over Trump in 2016, but by only 1.5 percent. Now, President Trump is hovering around 30 percent in all three states regarding his reelection in 2020.

NBC News and Marist released the poll numbers Wednesday, with more forthcoming on Thursday. That 28-31 percent mark holds true for other national polls of voter attitudes leading into the 2018 midterm elections.

And while a lot can happen between now and 2020, the midterm elections are only 104 days away. Those poll numbers concern Republicans the most and the news from these important states is not good.

In congressional preference, the Democrats lead the GOP by 8 to 12 percentage points, approaching 50 percent. While preference for Republican legislators fared better than Trump, not by much.

And that could be tied to the President's approval ratings. While the first question merely asked if Trump should return to the Oval Office in 2020, the second asked people to rate his job performance.

In Michigan, Minnesota, and Wisconsin, the President earned a solid F. His approval numbers match very closely to the congressional preference numbers for GOP support. However his disapproval numbers are higher than support for Democrats in Congress.

Over 50 percent of voters in all three states disapprove of the job Trump is doing at the White House.

Many speculate that prominent Republicans already saw the writing on the wall for 2018. Several prominent GOP members announced their retirement from politics, including Wisconsin Republican Representative and Speaker of the House Paul Ryan.

As for the President, he continues to hold routine rallies for himself. The campaign almost never stopped.

However the rallies are going to more remote areas now, with smaller venues and smaller crowds. The President's last two Trump rallies were held in Fargo, North Dakota and Great Falls, Montana. Crowd size is anywhere from hundreds to thousands according to the source for the numbers.

The arena for Trump's Great Falls event has a maximum capacity of 6,600 people without the special barricades required for a presidential entourage.

People reacting to the latest poll numbers were unsurprised by the outcome. Many listed reasons for the drop in Trump and GOP approval.

For many, it is about promises made and promises not kept.

@NBCNews It's not exactly a secret that a large majority of Americans don't like Trump. The guy sucks. The far rig… https://t.co/tGpyS3xEw0
— Derrick Swafford (@Derrick Swafford) 1532553895.0

And some posited explanations for some of the numbers.

Including a few sarcastic ones.

Nothing will be certain until the ballots are cast and votes are counted. In the 2014 midterms where less that 40 percent of eligible voters showed up, voter apathy decided the election, not personal choice. Hopefully in 2018, people will be motivated to head to the polls on Tuesday, November 6, 2018.